Obscurity of the Day: Butter & Boop 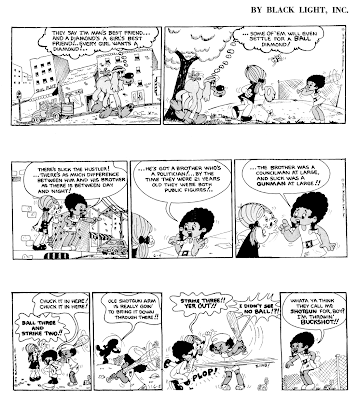 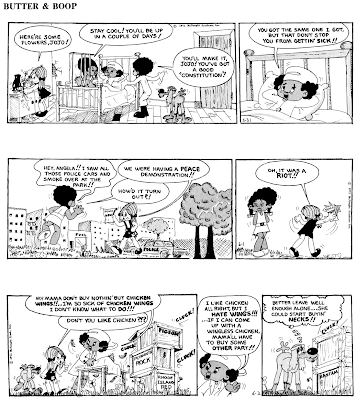 The late 1960s to mid-70s was a time when 'relevance' tried its darnedest to invade the comic strips. Whether advancing a social or political agenda, young cartoonists all seemed to have Something Important to say. Not that there's anything wrong with that, but if all these relevant strips had been picked up by papers, it would have been like reading a page of a social studies textbook every day on the comics page. The key, of course, is to get your point across with humor. Doonesbury and Pogo were masterful at combining humor with relevant content, and Wee Pals, appealing to a less sophisticated demographic, got its point across with a smile.

Butter & Boop is an example of a comic strip that tended to forget that nagging problem of being funny. And no wonder -- the comic strip was begun under the aegis of Black Light Inc., an inner city arts project that was sponsored by a do-gooder starch magnate (yes, there really is such a thing). The studio began in 1968 with a full complement of budding artists, but most drifted away until there were but two -- Louis Slaughter and Edward J. Carr. For reasons that seem a little misty in the retelling, these two guys, who seemed to have basically no interest in comic strips, began producing Butter & Boop. With starch money buoying up the self-syndicated operation and a big-hearted magnate encouraging these guys to "tell it like it is", a few papers were found to take the daily strip, which first appeared on May 15 1969.

The samples above are from two years into the run, and you'll have to take my word for it that the quality of the strip had already improved by leaps and bounds. The early stuff is quite militant and pugnacious in its desire to 'expose' inner city life to suburban newspaper readers. Although that flavor is still there two years later, Slaughter and Carr were toning it down and trying to entertain a little instead of beating readers over the head.

It was at this point that they were able to interest McNaught Syndicate in distributing the strip. McNaught took over syndication on May 17 1971. Despite the marketing push of a major syndicate, the strip found few new takers. The fact that the strip was still a little on the rough side, and that the similarly themed Wee Pals was in its heyday were the probable obstacles. Butter & Boop was with McNaught for a bit over two years; they seem to have parted ways in August 1973. The creators commented later in a February 1974 Ebony feature article that they didn't feel the syndicate did enough to market the strip and so they went back to self-syndication.

At that point the strip becomes really hard to find. Reading between the lines of the Ebony article the strip may have been down to two clients, the Kansas City Star and the Nashville Tennessean, neither of which I've had an opportunity to check. In the Ebony article, the creators seem to be saying that self-syndication was too much of a drain on their time and that if a syndicate couldn't be found then Butter & Boop was not going to continue much longer. The last indication I find that it was running is a citation that the co-creators got a Lord Calvert Whiskey Men of Distinction award in 1975.

Comments:
Butter & Boop ran in the PHILADELPHIA TRIBUNE at one time, and also the DELAWARE COUNTY DAILY TIMES (Chester, Penna.) ran it from 17 May 1971 until 15 September 1973.

I remember seeing this strip in the LEXINGTON HERALD briefly around 1974 or thereabouts...

I love the drawing style.

I saw some strips in the Tennessean microfilm archive. I wonder how long they ran it.

Do you have any idea of Slaughter and Carr's birth years, and if they are still alive? A "Dewar's Profile" whisky ad of the two of them ran in 1975, saying they were were ages 25 (Carr) and 32 (Slaughter). I can do the math, but that is plus or minus a year. I ask because I'm writing an article for a reference book and I'm finding it near impossible to locate information on the pair. Here is a link to the ad: http://books.google.com/books?id=xEMdQgT54O8C&pg=PA28&lpg=PA28&dq=%22Louis+Slaughter%22+Kansas+City+comics&source=bl&ots=Mmi9AiO_gV&sig=0PaIuX3utgQHh_EbqIszpFtpRfQ&hl=en&sa=X&ei=p5M9T8bJEunx0gGJ-uXfBw&sqi=2&ved=0CDYQ6AEwBQ#v=onepage&q=%22Louis%20Slaughter%22%20Kansas%20City%20comics&f=false

Just stumbled in here looking up "Butter and Boop." For anonymous, the age of Louis Slaughter was about right although I suspect that he might have been a couple of years older. I went to school with Louis and his brother, Michael, for a year or two in the Kansas City area in the early 1950s. As I recall, they moved to the area from Lexington, MO.

I Have 18 of these strips can you tell me more info on them?what they would sell for and who to contact about these strips please?

Spotted "Butter and Boop" in the archived funny pages of the Santa Rosa Press Democrat. As you noted, it's credited to "Black Light Inc." I had to look it up. Looks like B&B first appeared in the Press Democrat on Monday 14 June 1971, dropping NANCY to make room for it! Thanks for the info!