Obscurity of the Day: McNutt 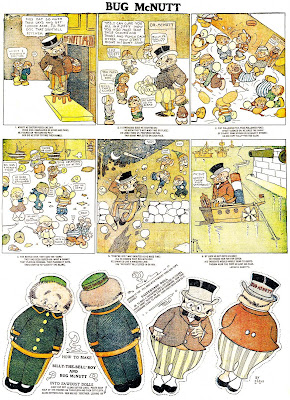 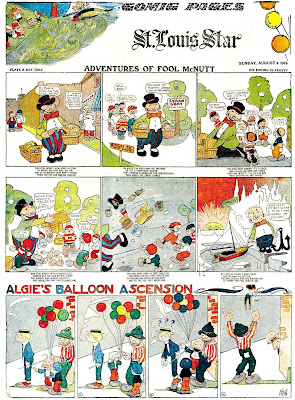 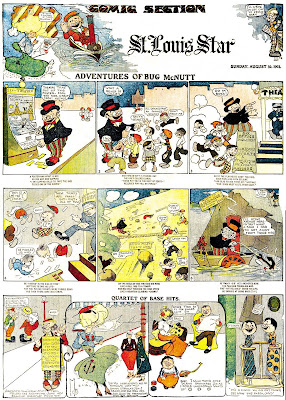 While I regularly sing the praises of my man Walter Bradford here as one of the great unsung wacky cartoonists, Cole Johnson has a decided preference for Eddie Eksergian. And I can certainly see where Cole has a point that his man is the summa cum wacky of the early funnies. I guess where I have trouble is that I get the distinct feeling that with Eddie the wackiness wasn't so much a matter of craftsmanship as a bit of a wiring problem in Eddie's noggin. I mean, if nothing else, Eddie's constant fascination with umbrellas does have to give you a moment's pause.

Well, Eddie's long dead so I guess ruminations regarding his mental stability or lack thereof are purely academic. So let's just enjoy the product of Eddie's dementia, shall we? Today we have a strip that I index as simply McNutt, although the main character sometimes went by Bug McNutt, Nat McNutt and Fool McNutt (consistency being the hobgoblin of small sane minds). Cole Johnson tells me some of these were actually different characters -- Cole cites an escaped lunatic, a political candidate and a racetrack tout.

The ones I've seen, though, all feature the same fellow, and quite a character he is. Apparently Eddie saw strips like the Katzenjammer Kids, Buster Brown and all their ilk and decided enough's enough with these rotten smartass kids who play tricks on adults. How about an adult who plays tricks on kids? And nix! Not that cutesy-pie crap Foxy Grandpa pulls. No, Eddie wanted serious mayhem -- grievous bodily and mental injury, with torture for flavor. McNutt is on a mission. We don't know why, but he's definitely dead set on making life hell for the rugrats. I can just imagine mom making one of those McNutt dolls in the top sample to scare the bejeezus out of junior. "Hey kid, any more trouble outta you and I'm gonna get McNutt after ya!"

An odd feature of McNutt is that the rhymes beneath the panels are sometimes credited  to others (see final panels). I find it hard to believe Eks was paying or otherwise recruiting people to do the bulk of the writing on this strip for him, and for that matter, I don't think others could maintain the Eks-level looniness exhibited. Bit of a mystery, that.

Comments:
What is the name of this syndicate-did the Star produce it? I've seen it run in Grand Rapids, Mich., Ogdensburg, NY, and Mansfield, Ohio. Gordon Campbell had it in a Nashville paper.
Eksergian reminds me of the early Herriman, with a dash of Edvard Munch thrown in.
He often liked to depict his characters tied up or boxed in, to go along with the umbrella business. Nothing like a little cheerful S & M on a Sunday morning!

Hi Mark --
The syndicate? Well, there's a question your brother and I debate ad nauseum. I'm of the opinion that World Color was producing this section for the St Louis Star and also a few other pigeons. When the Star got a Hearst page in late 1903 I think WCP saw the writing on the wall, and started looking for a new major client. They found that in the New York Daily News. For reasons unknown, they produced a different section for them (perhaps a rights issue?), a section that eventually usurped the 'St. Louis section'.

What evidence do I have to back up this scenario? All circumstantial I'm afraid. I have yet to find any really solid evidence for what was going on there in terms of who owned what, what was produced where and for whom it was produced. One semi-solid/gelatinous piece of evidence for one portion of the scenario is that World Color Press says in their company history that they grew out of World Color Printing, which was originally a subsidiary of the St. Louis Star.

But if i might add, Munsey's NY Daily News was not the same entity as the current one, in fact I think adopting a comic section was a desperation move to keep the paper afloat, which didn't work out, as it went belly up only months later.
I don't know how far we can trust the World Color history.
It's true that the St. Louis Star had the WCP section, but only after the old section with Eksergian & co., stopped. The SLS had one page of Hearst and one page of this section, but when it took the WCP in 1904, it was all four pages. I guess the WCP offered a ready-print even then. But if the SLS had anything to do with the section, other than being an early client, why diddn't they share things like artists and type fonts? And why didn't they keep on running WCP sundays for years to come? There was a brief period in about 1913 when the Star took one page of WCP once more, but then afterward, no other St.Louis paper bothered with WCP again.

Hi Mark --
According to the World Color Press corporate history, the two guys who started World Color Printing for the Star 'broke away' and made the company a self-sufficient entity. So it isn't too surprising that the Star was a bit soured on using their material and eventually switched.

The most intriguing question, I think, is the start of the second section. Why? Was WCP trying to follow the lead of McClure and have two sections available so they could supply two different papers in one area? Or was it a rights issue with the St. Louis Star? Or did Munsey ask then to develop an entirely new section for him? Even this explanation, seemingly a bad one since Munsey was a tightwad, has merit. The 'new' section was a lot classier or upscale than the Eks/Bloch one, what with having some cartoonists involved who were actually well-known in NYC (Anderson, Herriman, Mayer). Wouldn't a struggling and desperate NYC paper looking for circulation seek out some well-known but relatively cheap cartoonists familiar from other NY papers?

Maybe, but why would the Star, if it was their own, at least initially, play out a few last months of what would be considered inferior stuff? Again, the Herriman lineup looks nothing like the Eks lineup, not even the type, though they exist in the same time period. We know the Star started taking the new stuff in the Spring of 1904. What happened to other clients of the Eks syndicate? Do they start taking the Herriman lineup In January like the NY News? In the Spring like the Star? Not at all?
I never got to monitor any of the other Eks clients- The Ogdensburg paper for instance, had every comic section greedily swiped before they were microfilmed. I think the Mansfield News is available from Proquest or newspaper archive. If we could see what they were doing in 1904, we'll find out if a connection existed.
For a few weeks in December 1903, The New York Daily News announced that the wonderful new comic section was coming. I don't know if Munsey had an interest in any other papers as I've never seen another paper taking the Herriman & co. stuff so early. Do you suppose it might be that Munsey was in fact launching his own section with well known pros like Herriman, in an effort to compete with the all the other NY sunday comics? Obviously it diddn't change the fortunes of the News, but maybe this section and his contracted artists was valuable enough to sell after the News folded. A small time syndicate like the one offering the Eksergian page might acquire it at a fire sale price from Munsey. Notice that no new New York paper picked up any of it, and Major Ozone etc. would be mainly seen in the hinterlands, just as the Eks & Co. stuff had been. That would explain how they could be around at the same time,and obviously created in different places.

Regarding Munsey, he also bought the Boston Journal and Washington Times in 1901-02. According to his bio, around January 1904 he "stopped the Sunday Journal and started instead an enlarged 50-page Saturday Evening News with comics and magazine". So the new section was probably used there as well.

Unfortunately I have not yet been lucky enough to index a paper that made the Eks - WCP transition.

Cole says now a Knoxville paper that ran the Eks section in late 1903 shows that there were at least two pages, a front and back cover, offered.
In the case of the St. Louis Star, they only used one page in the last months of this section. If they were producing it, then they showed little faith in it to go outside for their other Sunday color page.