Obscurity of the Day: Caro-Graphics 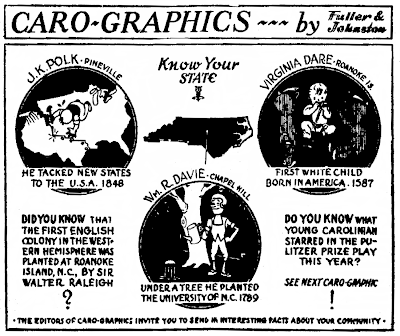 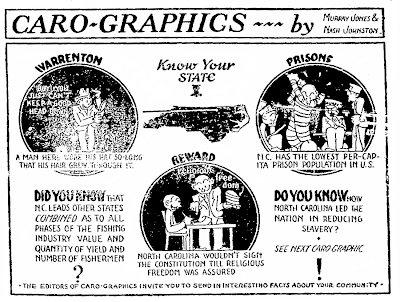 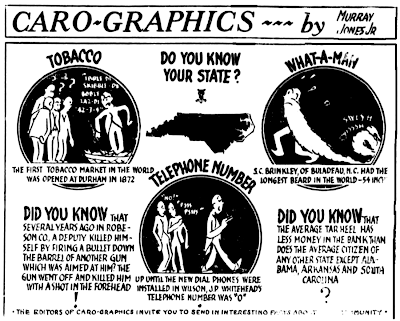 I was contacted by Lew Powell, who hoped I would have some words of wisdom to say about Caro-Graphics, a feature he found discussed on this North Carolina history site. Unfortunately I have to admit to Lew that I'd never heard of it!

Caro-Graphics is one of the many features that have come and gone over the years that tell factoids about a state, region or city. I doubt that there is a state in the union that can't boast a few of these features. Caro-Graphics focuses on North Carolina, which makes it two known for that state; the other being Carolina Hall of History.

Armed with the knowledge that the feature existed, some online searching revealed that it ran at least 1933 to 1937. The earliest samples carry credits to Nash Johnston and someone named Fuller. I believe they were both writers on the feature; Johnston was for sure. I say Fuller was a writer, too, because the art remains consistent throughout the life of the feature, and seems to have been by Murray Jones, Jr. throughout. I guess Jones didn't ask for credit early on. By late 1934 Fuller has disappeared, and then by 1937 so has Johnston, leaving Jones to presumably fend for himself as both artist and writer. Unfortunately I found no paper that ran the feature consistently or long enough to give more definite credit dates than these.

The writing is run of the mill for this sort of feature, but Jones' art is certainly an asset. Pleasingly stylized and slick, it really makes the feature quite attractive despite the awful reproduction of these samples, all found online.

Thanks to Lew Powell for putting me on the scent!

Comments:
You're a stalwart researcher, Allan. Many thanks for making this shard of North Caroliniana considerably less obscure.