Obscurity of the Day: Sketches From Life 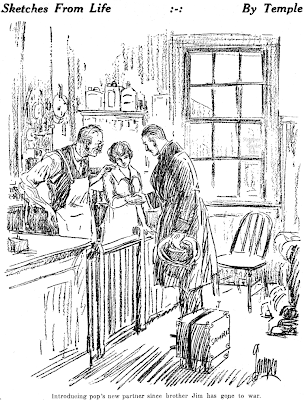 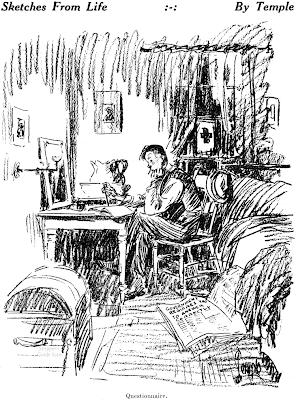 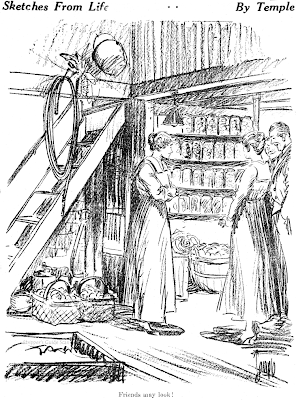 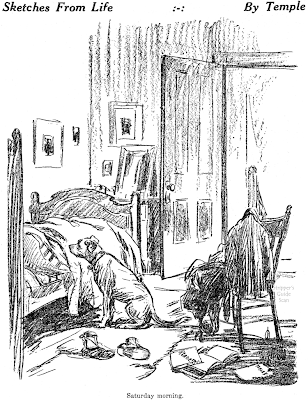 We tend to think of comics as raucous things, and when something comes along that is quiet, elegant and sophisticated we instinctively want to categorize it as something else. I proudly declare, though, that Sketches from Life is a cartoon panel. Cartoonist Harry Temple never went for the belly laugh, and in fact often drew pictures that were just observations of everyday life with no particular attempt at humor. His panel cartoons are sometimes wistful, occasionally even sad. But what they are most often is deftly drawn and quietly powerful.

Try to imagine something like Sketches from Life appearing in your daily paper -- a little eddy of somber reflection in a sea of headlines about war, crime and dirty politics. If you were a newspaper editor, would you see the value of Sketches from Life? Not many newspaper editors did take the feature, but those who did tended to be very loyal to it. I can certainly see why that would be. It seems to me readers could get quite addicted to a few square inches of calm meditation amid all the clamor and commotion of the news.

Sketches From Life was produced for the Cleveland Plain Dealer from September 17 1913 to November 24 1926. The Plain Dealer seems to have used World Color Printing as the syndicator of the feature for most of its life. There is some circumstantial evidence of a distribution relationship, perhaps short-term, with either Associated Newspapers or the Philadelphia Inquirer, too.

A book collection of the feature was issued in 1915 by World Color Printing, but there must have been a terrible distribution problem. The book is extremely rare -- I have never seen a copy for sale, and WorldCat shows copies of the book at only three libraries in the country.

Comments:
The situations and overall tone, if not the actual drawing style, reminds me a little of Norman Rockwell.

The dog reminds me of "Nipper," the RCA mascot

I just found the book with items that belonged to my mother who was born the year it was published. After scanning its wonderful drawings I would not be adverse to making it available to a collector. Any advice?

Put it on ebay and leave us a note. I'm sure some collectors will be interested.

Thank you for your enlightening blog about this charming little book. I just posted a response then recalled that I had not responded to your comment that "there must have been a terrible distribution problem."

This notation on the title page of the book holds the answer to your mystery: "This book printed for gift distribution only, is limited to 1,000 numbered copies of which this is number 858 and all copies have been distributed The Plain Dealer First Newspaper of Cleveland Sixth City 1915"

I imagine that the dearth of library copies is due not only to the tiny number printed but the gift-distribution factor. Probably most of those still in existence are in attics--or the private collections of the discerning.

For your interest and enjoyment I'm sending you scans of the cover and title page in both PDF and MS Word formats. Thank you again for posting your blog on this subject. As you noted, copies appear to be very rare. There's no ebook listed on googlebooks, and apparently neither that outlet nor Abe books has a hard copy.

Before resorting to ebay I'll consult a local antiquarian book expert I've dealt with before.

Mr. Holtz,
I too have a numbered print of Temple's "Sketches from Life", #790 of 1000. In your post you mentioned consulting a book antiquarian as to the books rarity. Were you able to garner any useful information?