Walter Emil Scott was born in Sandusky, Ohio on August 9, 1894, according to the Ohio, Births and Christenings Index, 1800-1962 at Ancestry.com. In the 1900 U.S. Federal Census, he was the third of four children born to Walter and Amelia. They lived in Sandusky at 420 Tyler Street. His father was a railroad clerk.


Ten years later they were at the same address. His father was a pottermaker at a foundry. In the March 23, 1930 Cleveland Plain Dealer, art critic Grace V. Kelly wrote, "…[Scott] came to Cleveland in 1916…he studied some in the night classes of the Cleveland School of Art, and before coming to the Plain Dealer did commercial art, sharing a studio with Joseph Jicha…." He signed his World War I draft card on June 5, 1917; the card included his middle name. He was an advertising artist, described as tall height, slender build with blue eyes and brown hair. He resided at 9400 Euclid Avenue.


In 1920 Scott lived with his parents who resided in Sandusky at 818 Prospect. His occupation was commercial artist. The Plain Dealer, May 4, 1956 edition, said:


"…after a short stretch with the drawing board at the Press, he joined the Plain Dealer and stayed 13 years. Here he met the late Gordon Barrick, nationally-known artist and Plain Dealer art director.


"What little I know about art came from the teaching, patience and kindness of 'Doc' Barrick…"


He was on staff at the Plain Dealer as early as November 1922; he contributed a background illustration, of pilgrims rowing boats from their ship and coming ashore, to the Sunday Magazine cover, dated November 26. Staff artist Don Wootton's drawing of Scott was published on October 29, 1924 (below). 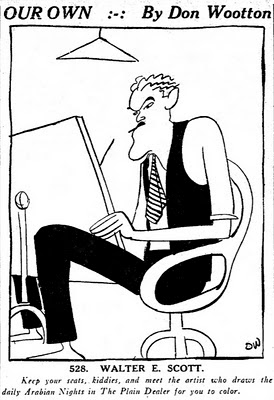 In 1926 Scott illustrated Dramatic Events in Bible History. He produced the Sunday featureThe Doonks in early 1933, but its origin can be traced as far back as an October 24, 1926 Plain Dealer Fiction Magazine cover (below), and to 1925 as original art (second below) that may have appeared in the Plain Dealer, or have been exhibited in local galleries. 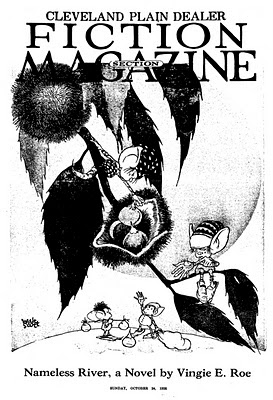 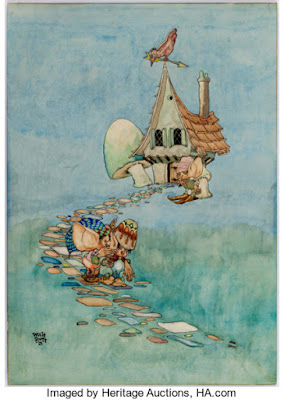 His Doonks were in the May Show, an annual art exhibition. On May 13, 1928, Kelly wrote, "Walt Scott's 'Doonk Town,' is surely the stronghold of the Doonks, and is so full of sheer entertainment that you'd never tire of it…." Two weeks later in the May 27, Plain Dealer food column, Florence Laganke wrote:

Did I hear you bemoaning the fact that all your friends were going abroad this summer? And do you feel so stay-at-home-ish and aggrieved? I know. I feel that way too. Suppose we take a culinary trip this summer. "My mind to me a kingdom is" may be true, but "my palate to me all Europe is" can be equally true.


Walt Scott, one of the artist on the Plain Dealer staff, has drawn a series of maps showing the doonks of various countries. A doonk, you may or may not know, is a creature of Walt Scott's imagination and brush.


Doonks live in Doonkland, a country which Mr. Scott had shown in one of his paintings on exhibit in the current May show at the Art Museum. But doonks are international and cosmopolitan.


If you look closely at this map, you will see the doonk who inhabits France. He looks well fed. Why shouldn't he be, since he is in the culinary capital of the world?


Suppose we travel with the Doonks this summer and see just what their fare is in the various countries. Today, we are in France…. 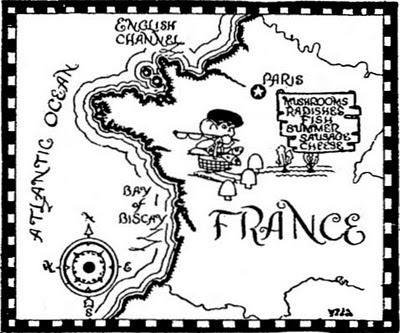 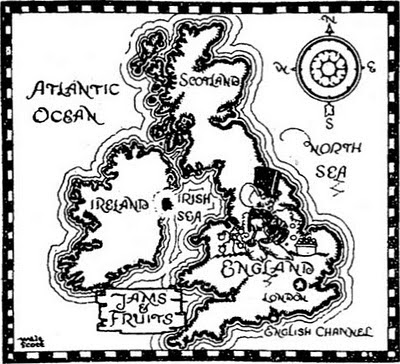 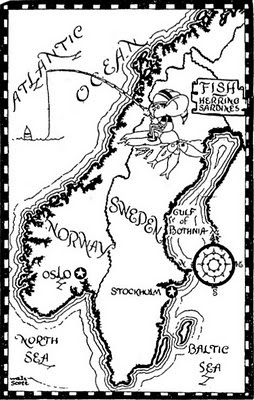 For the next six weeks she wrote about British and European cuisines; Scott provided maps for five of the six columns. Subsequent columns used photographs of food. At the next May Show, Kelly wrote, on May 19, 1929, "Walt Scott's 'Ye Good Ship Doonk' and his 'Witches Advice' have spirited action and personality." Scott produced more Doonks artwork which were exhibited at Lindner's Little Gallery from March 24 to April 5, 1930. In the March 23 Plain Dealer, Kelly praised the art:

...About 25 or 30 water colors and etchings will be shown, and besides "The Doonks," the subjects will deal with pirates, treasure chests, yellow-eyed witches and what not. I said they would be entertaining for the children, but, after all, I do not know why I should limit my remarks to the younger generation.


For they are so entertaining to me that I can not see why all the grown-up world should not be entertained by them. Especially since they are all designed upon the soundest art principles and executed as a good craftsman should turn out work….


…His fairy story pictures came into being during a bad commercial art year, when he had lots of time on his hands. The theme was so much to his liking that he has carried it on ever since in an infinite variety of form….


…Some of the first numbers will be shown of a comic strip he is creating, and which is the only known comic strip, addressed exclusively to children. The entire Doonk family is used in this, as well as those with whom the Doonks come in contact.

Seven months later his Doonks and other creatures were featured in a two-page Halloween spread (below) in the October 26 Plain Dealer. 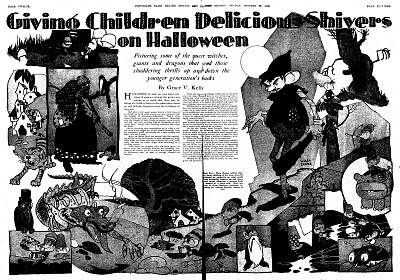 In the 1930 census, Scott lived in Lakewood, Ohio at 1560 Robinwood Avenue. He was married, since he was 26, and had three children. His occupation was newspaper artist. The Doonks finally arrived in the comics section in February 1933. A Plain Dealer Sunday paper ad, in the Saturday, February 18 issue, included this line: "…There's a new feature which children will love—"The Life of the Donks [sic]," a beautiful pictorial by Walt Scott." The May 4, 1956 Plain Dealer, said, "In 1935 he joined the Newspaper Enterprise Association, and next came several years in California with the Walt Disney and other cartoon studios. His first love, illustrating, called him back to NEA in 1943."


He produced Songs of Christmas, in 1951. His other NEA Christmas strips can be viewed here. Editor & Publisher profiled Scott in 1952. Lambiek said, "Scott drew the Sunday pages of Captain Easy as an assistant to Les Turner." On May 4, 1956, the Plain Dealer announced the return of the Doonks, to its Sunday paper, in the strip The Little People.


According to the Plain Dealer, an exhibition of The Little People artwork was displayed at the Peninsula Public Library from December 6 to 31, 1970. Scott passed away on December 17, 1970 in Rocky River, a western suburb of Cleveland. Retired at the time, he was survived by his wife, three children, two siblings, ten grandchildren and two great-grandchildren.


The Grand Comics Database has a list of his comic book credits.