Obscurity of the Day: The Weather Bird Family 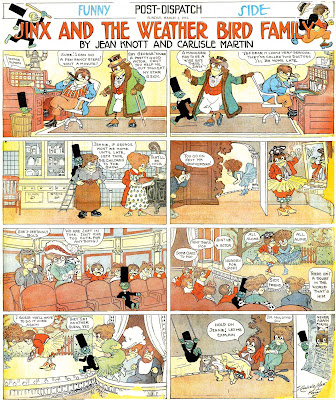 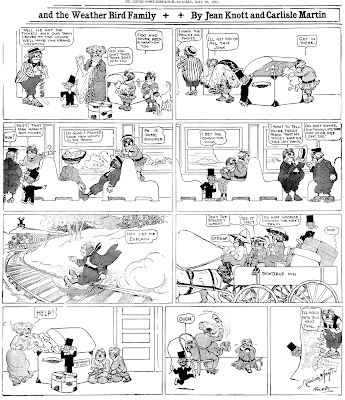 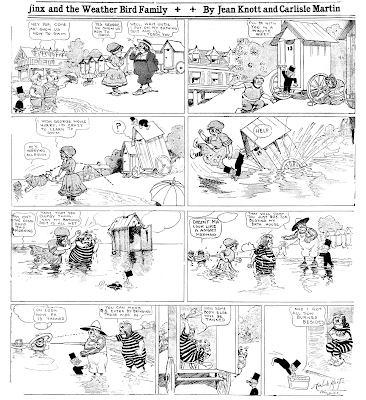 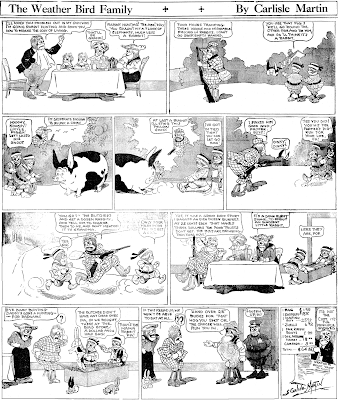 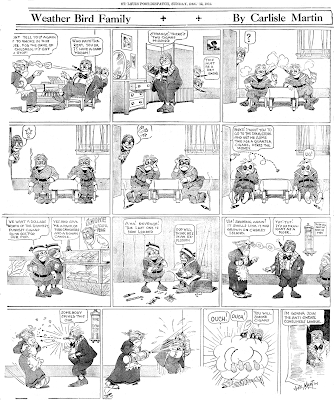 The Weatherbird is only an obscurity if you've never spent any time in St. Louis. In that city he is an institution, appearing in the St. Louis Post-Dispatch on a daily basis ever since 1901. If you're keeping score, that makes The Weatherbird the longest running daily newspaper cartoon of all time, with plenty of room to spare and with absolutely no chance of being overtaken since he is still running even today.

Now I say it is the longest running daily feature, but of course there are some minor caveats: at first the cartoon was truly just a weather cartoon (a wet bird indicates rain, a sweating bird indicates high temperatures, and so on) and that doesn't qualify as a real cartoon series. But by all accounts that period was very short -- the Weatherbird started making witty little commentaries very early on in his life. Also, we have no guarantee that the feature was afforded new art every day for all those years. After all, just how many poses of the bird do you really need to handle almost all occasions. The third caveat is that for much of the panel cartoon's life the writing has been by committee, with P-D reporters, editors and others submitting caption ideas; the lack of a consistent credit is a little troubling when bestowing such laurels.

But now I'm starting to get far afield. Because this post is not about the Weatherbird's entire history, which deserves more time and space than this. No, this is just about one particularly obscure part of an astounding 111+ year run.

Sometime in 1912, we don't know exactly when, but it was on or before March 3, the weatherbird got his own Sunday comic strip in the Post-Dispatch. The paper, which was owned by Pulitzer, dispensed with one page of the Funny Side section that was produced by their big brother, the New York World. In its place they inserted the homegrown feature, Jinx and the Weather Bird Family. The artist on the feature, S. Carlisle Martin, was the same fellow who was producing the daily cartoons at that time. The writing, however, was handled by Jean Knott, who would later become an important cartoonist himself in the Pulitzer organization. The strip was yet another in that endless procession of Katzenjammer Kids rip-offs, except that Knott had an interesting idea of adding a little fellow named Jinx. This imp's role was to set the misadventures in motion, usually by moving a prop around, or with a whisper in someone's ear. The conceit had possibilities, though in the examples I've seen nothing very exciting is done with the idea.

Sometime between July and November, the Jinx character and Jean Knott both took a powder, leaving Martin to handle the feature on his own, and the title was shortened to The Weather Bird Family. This move only proved Knott's importance to the feature, because now it became an utterly slavish Katzies clone (minus the Teutonic accents of course), with absolutely nothing original going on. The feature apparently ended on December 29 1912.

Thanks very much to Cole Johnson, who furnished all the information and samples of this rare feature!

The above is the current cartoonist's site, but there are more than one about the Weather Bird.