Obscurity of the Day: Merrie Chase 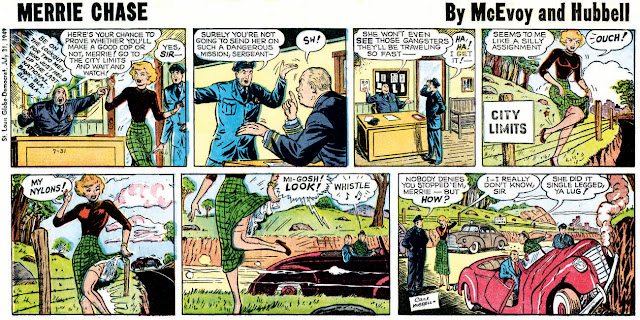 Here's a delightful strip about a lady cop. In the late 1940s, when Merrie Chase was offered to newspapers, the idea of a female police officer was, if not outright laughable, then certainly at least noteworthy. Although women had successfully penetrated many other traditionally male professions due to wartime labor shortages, law enforcement by and large wasn't one of them. Although there were women on police forces, the vast majority were basically deskbound secretaries. Here's a short history of women in policing.

Merrie Chase was written by Renny McEvoy and drawn by Carl Hubbell. McEvoy gained entrance to the comic-stripping fraternity through his stepfather, J.P. McEvoy, creator of Dixie Dugan. By the time he created Merrie Chase, Renny was already writing that famed strip under his father's credit. He was also in the early stages of a career as an actor, though he never really advanced from playing minor TV and movie parts. Carl Hubbell I know little about, except that he drew pretty darn well, and he was not a Hall of Fame pitcher. About all I can find is that he worked in comic books in the 1950s and 60s.

I think what I like best about Merrie Chase (okay, second best after the cheesecake) is that although the strip is definitely having fun with the idea of a female cop, Merrie often comes out on top in situations, and not just because of dumb luck (as in our top sample). McEvoy evidently was willing to take the idea of a female cop seriously, despite the strip being an obvious and convenient showcase for all sorts of crass chauvinistic gags. He points out that women can have an advantage over guys in some police situations, especially in undercover work, which is a subject of some of the daily continuities.

However, Merrie Chase, which debuted on July 31 1949, never caught on. Maybe it was the sort of strip that needed time to find an audience, maybe it needed a hungrier writer who was driven to make it  succeed. After just six months, Carl Hubbell was either fired or quit from the strip, and was replaced by Paul Reinman, by coincidence or not, another comic book guy. Reinman was a good cartoonist, but couldn't really duplicate Hubbell's facility with the curvaceous and cute heroine.

Just a little over a year into the run, on November 26 1950, the plug was pulled. Merrie Chase was replaced on the McNaught Syndicate roster by The Jackson Twins, a much more traditional 'girl strip' starring teenage twins.

Comments:
Renny McEvoy was the stepson of J. P., and by both his comments and the strip's style, he took over Dixie Dugan early on - c1932. I haven't updated my blog since August (health reasons), but the last blog there was on Renny and Dixie - including his showing up in the strip.

Ah, thanks for the correction about Renny being a stepson -- I wondered when I found a list of J.P.'s children and Renny wasn't listed.

As for Renny writing DD since 1932, do you recall where you read that? I don't doubt you're right, but I'd like a citation so I can update my records. Anxious to see any info on Renny, as there isn't much floating around the 'net about him.

I love the work of HUbbell, a sort of gentle Bill Elder style. He worked for several of Kubert and Maurer's titles in the fifties, where his style really fit. I believe his wife wrote hs comics by then. I have found and shown a lot of copies on my blog, including a local newspaper piece on Hubbell, but none as pretty as your samples! So clean, so sharp! Where did you get those?!

A direct link to my chat on Dixie
http://sangorshop.blogspot.com/2012/08/dixie-dugan-and-renny-mcevoy.html

I don't mention the source on my blog, but it's the St. Petersburg Times December 2, 1943 Page 9
http://news.google.com/newspapers?id=20ZPAAAAIBAJ&sjid=m04DAAAAIBAJ&pg=5932,2579871&dq=dixie+dugan+mcevoy+renny&hl=en Pardon these long links.

Renny McEvoy is my great grandfather, and I can attest to the fact that he did in fact write Dixie Dugan starting in 1932.

Another interesting factoid is that is grandson, Michael B. Anderson, is an Emmy award winning Writer, Director and Produce for the show The Simpsons. He won "Favorite Episode" for their 20 year anniversary as well.