Obscurity of the Day: Amy 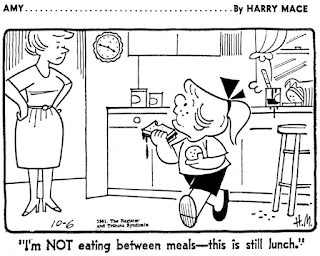 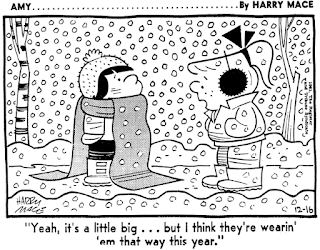 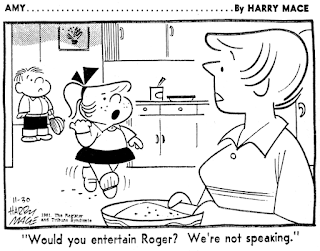 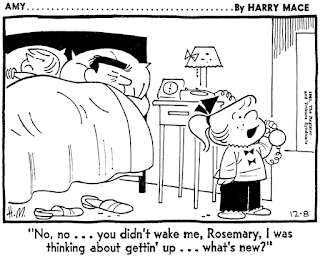 Harry Mace, who was a prolific magazine gag cartoonist in the 1950s, began to make a concerted switch to newspaper work as the magazine markets started to dry up. He hooked up with the Register & Tribune Syndicate in 1957, and did a kid panel titled Junior Grade for them. It didn't really seem to be going anywhere fast, and was dumped in 1960. However, Mace and R&T seemed to be set on the idea of making a kid panel work, and on September 25 1961, Mace was back with Amy, a daily gag panel about a sassy tomboy. Amy's personality was a mix of Dennis the Menace and Lucy from Peanuts -- comparisons that probably didn't hurt a bit in the feature's marketing. The feature suffered from an overabundance of weak gags in my opinion, but the crisp artwork and aura of other successful comic characters seems to have turned on enough newspaper editors to call itself at least a modest success. The panel debuted with a client list of a little under fifty papers.

Unfortunately for Mace, he was not going to bask in his success for long. After a brief illness of some kind, Mace died at the age of 41 in December 1963. That could have easily been the end of Amy, which was not setting the world on fire, except that Mace's close friend and neighbor, fellow gag cartoonist Jack Tippit, had been assisting on the feature. At first Tippit had supplied occasional gags, but when Mace got sick Tippit took over the entire production. Register & Tribune was so impressed with the perfect match between Mace's style and Tippit's that they saw no reason to drop the feature, and Jack Tippit's byline started appearing on the strip on January 27 1964.

Tippit, obviously seeing the same writing on the wall regarding the decline of the magazine gag market, readily accepted the assignment and continued Amy. He shepherded the feature to a thirty year run, never in a lot of papers, but enough to make the feature worth producing, ending sometime in 1991. By then the feature had outlasted it's own syndicate, and had been taken over by King Features for the final half-decade of its run.

Despite its long run, Amy was only once collected in book form, an Ace/Grosset & Dunlap paperback issued in 1978.

Comments:
The Register & Tribune syndicate was absorbed by the Hearst corporation in 1986, the biggest prize being The Family Circus. The former R&T titles were now under the banner of "Cowles Syndicate Inc." though King Features was the syndicator. The final AMY was 6/6/92.

Thanks very much for that definitive AMY end date, Mark! Re Cowles Syndicate, are you saying that R&T did that name change to signal that they were now having King handle the distribution? My understanding is that King bought Cowles for $4.2 million in 1986, a year after R&T changed names.

This is the sort of syndicate business minutiae that I just dote on!

In your book you have another Mace strip called Junior Grade, which predated Amy. I have a few on my blogand it isn't to bad. I also have a sries of names cartoons that I couldn't place for a Salt Lake City paper. It has the King Features logo and seems like it's part of a serie with several artists, except that on the days Mace doesn't appear there is no ther cartoon. Could it have been something like Bud Blake's series? In this case the titles are new every day, though. YOu can find it on my blog under the Harry Mace label.

The register & Tribune was owned by the Cowles family, which at one time also published LOOK. The change to the Cowles imprint from the Register & Tribune one took place long before the Hearst corporation bought the syndicate, in early 1985. The first "Family Circus" with the imprint of Cowles Syndicate Inc." was 25 February 1985.

Hi Mark --
I was aware of the R&T - Cowles name change in 1985, prior to the sale to King. What I thought you were indicating in your first ms. was that the name changed signaled that R&T's features were now being distributed by King (sort of like George Matthew Adams' Sundays way back when). I gather I misunderstood you.

Ger -- those Harry Mace cartoons look to be in the standard Laff-a-Day format, but I wasn't aware that King ever provided daily titles and credit slugs for them. So it sure looks like it could be a Harry Mace-only gag feature. Or, the editor of that paper REALLY REALLY loved Harry Mace's work, picked out the Laff-a-Days by Harry, and added a credit. Which seems pretty far-fetched.

Harry Mace was a friend of my parents when I was growing up in Redding, CT in the 1950s. He gave them a signed panel which shows a couple at the front door returning from an evening out, and the babysitter standing in the midst of the bombed-out living room is saying "I've decided something tonight, Mrs. Prindle...I don't think I'll ever get married." I remember that Harry's wife was named Peggy, and they had a daughter Janet.

Harry Mace was my father.

You might be interested to know that the original name for the panel was 'Phoebe' but the syndicate rep didn't like it. He said it remiinded him of a former girlfriend, so my dad changed it.

I'll be sending you an email shortly to clear up some of the mysteries that I've just learned are floating around and to offer you some clean clip sheets of both Amy and Junior Grade. Not being sure how often you check back for new postings, email seems safer for that.

Thank you for the info, Janet! Looking forward to any additional info you care to share.

The Art Wood Collection in the Library of Congress has 12 Mace original drawings. The last one is dated March 17, 1961.