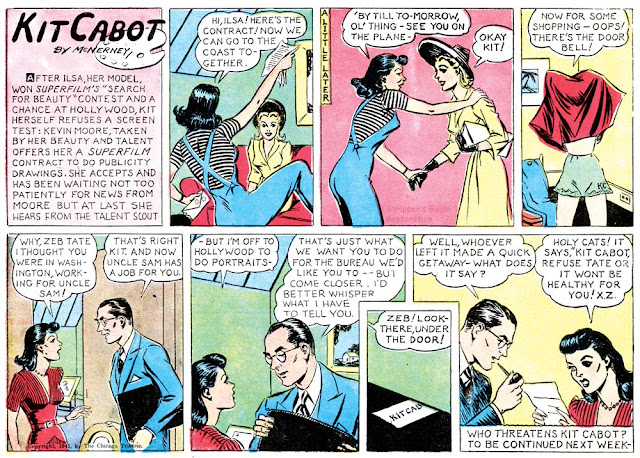 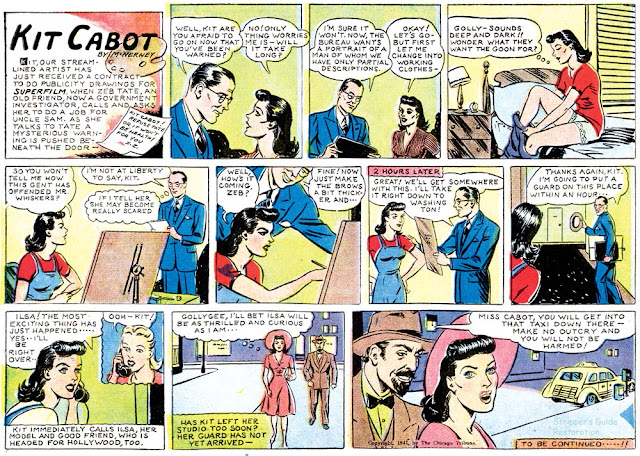 Kit Cabot may not have had the makings of the next blockbuster hit, but I'm sure intrigued and wish it had stuck around awhile. I ask you -- how can you go wrong by making your lovely heroine an artist who undresses on panel at least once per week?

Kit Cabot was added to the Chicago Tribune Comic Book section on June 8 1941. At first it might have seemed an odd choice, because the strip has a lot in common with Brenda Starr, with which it shared space in the Comic Book section. Both were strong female 'working girl' characters, and both always seems to have a moment to peel down to their skivvies in the middle of the action. However, after three weeks sharing space, Brenda was graduated from the Comic Book section into the regular comic section, making it obvious that Kit Cabot had been intended as her replacement here in the Comic Book when the elder strip went on to bigger and better things.

However, Kit Cabot didn't last long. The strip was dropped from the Comic Book on April 26 1942, less than a year later, when the section was downsized from 24 to 16 pages. Ah, all the undergarments we never got to see...

The strip was penned by someone named Gene McNerney, a name that means little to me. All I know is that he (?) also tried syndicating a couple features through the elusive Watkins Syndicate, neither of which have ever turned up in my research.

Comments:
gene mcnerney was my grandfather -a cartoonist for teh new yoprker and illustrator

Eugene McNerney was my father. To clarify a few things. He drew for the New York Daily News for many years, as well as the Saturday Evening Post, Ladies Home Journal,Colliers,the Trib,etc. Before joining the USMC the McNerney family moved to New Hope PA. We never lived in Chicago. His strip was syndicated out of Chicago. He joined the USMC as a Captain assigned to General Holland Smith's staff as a combat artist and served in the South Pacific.
He left the Marina Corps as a Major. Upon leaving the Marine Corps he went to work as a sketch artist for 20th Century Fox and Columbia. Upon his retirement he moved to Huntington Beach CA and for a few years taught art at Orange Coast College, as well as giving art lessons. Many of his portraits of Marine Generals are housed at the Marine Base in San Diego. Fo He was a painter as well as an illustrator and cartoonist.For further information: my email is 4nlehman@gmail.com