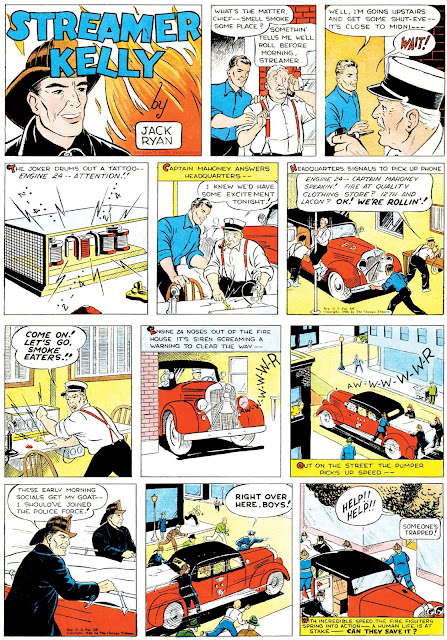 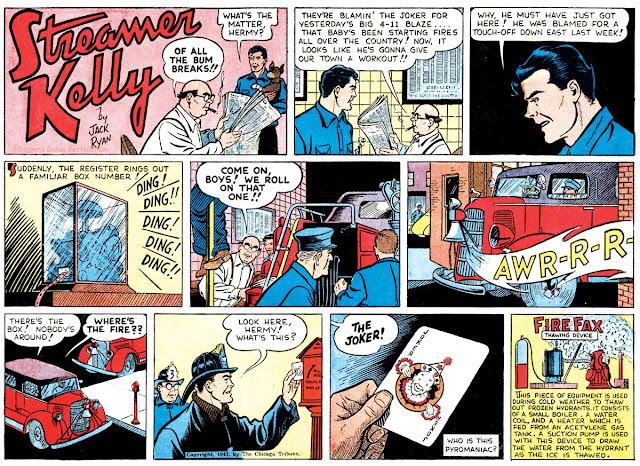 Today I suppose a strip titled Streamer Kelly would tell the saga of a multimedia website developer, but back on September 8 1940, when the strip debuted in the Chicago Tribune Comic Book section, a streamer was a fireman. The Sunday-only Streamer Kelly told tales from the firehouse for a solid run of seven years (with a big hole in the middle, which we'll get to momentarily).

This strip makes me wonder -- kids were (and are?) definitely fascinated by firemen, so why weren't there more features telling the tales of the profession? I guess I answered that question for myself when I read a big batch of Streamer Kelly strips in preparation for this post, and found that the most of the plots revolved around firebugs. When push comes to shove, I guess there's not all that many different plots available that involve firefighting. Oh well, so much for yet another of my million dollar ideas.

One of Streamer Kelly's firebugs is noteworthy, though, for their nom de guerre -- The Joker (see sample #2). The Batman's nemesis predates Streamer Kelly's villain by a good solid year, but still, kinda neat. Unfortunately, given that the creator, Jack Ryan, was also producing comic books in the early 1940s, I have the sinking feeling that he did not come up with the idea independently.

The Streamer Kelly strip had two separate runs. The first, in the Chicago Tribune Comic Book, survived after that section ended by graduating to the main comic section, but the flame was put out on October 31 1943.

This might have been because Jack Ryan was called into service, because after the war was over Streamer Kelly reappeared in the Chicago Tribune, starting April 7 1946. The strip ran there until December 31 1950. Considering that I have never seen the strip running in any other paper, I think it's safe to say that the Tribune was uncharacteristically liberal in affording it comic section space all that time.

PS -- the term 'joker' -- used in two different senses in our samples -- deserves explanation (well, at least I was confused). Turns out that the most popular municipal fire alarm system in the U.S., until the 1970s or so, was the Gamewell system. For reasons unknown it was known as the 'Gamewell Joker'. Okay, so maybe Jack Ryan did come up with his Joker character independently after all, taking a cue from the Gamewell device's name.

PPS -- the top sample has been reformatted for this blogpost -- originally the top and bottom halves appeared on separate pages of the Chicago Tribune Comic Book.

I recall how upset I was when Streamer Kelly disappeared from our Sunday Chicago Tribune without any notice--at least not any my 7-year-old eyes saw. SK was my favorite strip from when I could first read until its demise at the end of 1950. I asked various adults why it was gone, and nobody I found had even heard of it. I recall one story about a warehouse fire where the department had to bring in a fireboat, an idea I had never heard of. I remembered that in 1980 when a fire-fighter friend gave me and my family a tour of the two Seattle fireboats in 1980. They have now been retired. Thanks for your post about Ryan and his Streamer Kelly strip. It answered a lot of my questions from 63 years ago.