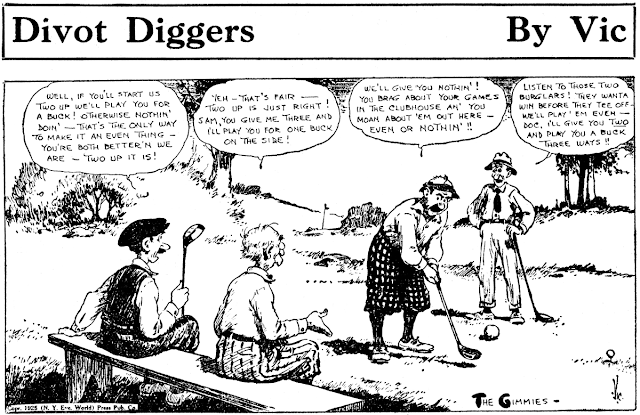 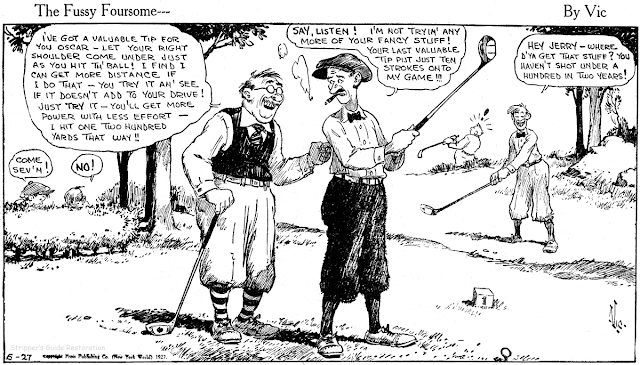 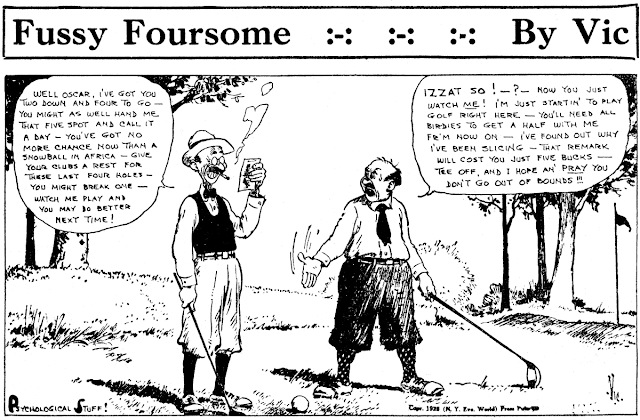 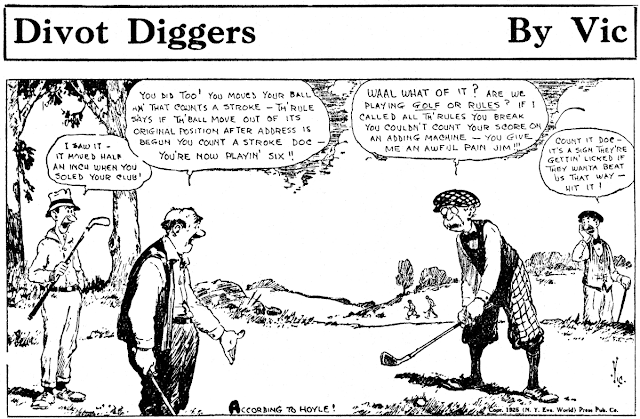 Alex Jay, a golf fan, tells me that the PGA Championship begins tomorrow, and so it's time to dig up another golfing strip. Fair enough, says I. Here's a little known strip, with a pretty familiar name, from the pen of Vic Forsythe.

Those of you who are at least semi-serious about your newspaper funnies probably looked askance at the title overhead. You scoff at the idea that Divot Diggers and Fussy Foursome are obscurities. Come, come, you say, those toppers to the popular Joe Jinks Sunday page are hardly obscure. Well, says I, you might be right, excepting of course that you're just plain wrong. Y'see, I'm not talking about the Joe Jinks toppers at all, but rather an earlier series by the same name, or rather names, as the later topper strips.

As is well known, cartoonists who were required to do Sunday toppers often took the easy way out and conserved on brain juice by resurrecting old series. For instance, George McManus revived Rosie's Beau as a topper, Swinnerton revived Mister Jack, Opper dug up the bones of Maud the mule, etc etc.

Vic Forsythe didn't have to hark back to some ancient series, however. His Divot Diggers and Fussy Foursome topper titles debuted before the "CANCELLED" stamp was dry on the last episode of the original series.

But I get ahead of myself. By 1924, when Vic's Joe Jinks (then still known as Joe's Car) was already doing quite well, he came up with an idea for a weekly cartoon panel about golf. Forsythe must have been a committed duffer himself, because his panels, titled variously Divot Diggers and Fussy Foursome, were about as dry to non-golfers as they must be hilarious to members of the little-white-ball-chasing fraternity. Very much like Joe Jinks, the panel was wordy in the extreme. Golfers no doubt ate it up, as did Forsythe's editor at his syndicate, Press Publishing.

You know the weekly panel must have been irresistible to any newspaper editor who was also a golfer. Those guys couldn't care less if anyone else read the long-winded panels -- they liked it, so they bought it. But I guess newspaper editors as a class don't get out on the links much, because the series did not sell very well. That sales flop wouldn't have been helped by the weekly frequency. Where does it go in the paper, and on what day of the week should it be run? These are the complex puzzles that unnerve many newspaper editors, and cause them to shy away from a series that presents them with cause for deep thought.

The series wrapped up after a respectable seven year run on April 26 1931. However, as mentioned earlier, both titles would soon be resurrected as toppers to Joe Jinks, where they would last another decade.