Obscurity of the Day: Jellybean Jones 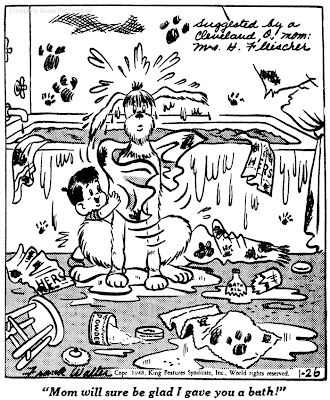 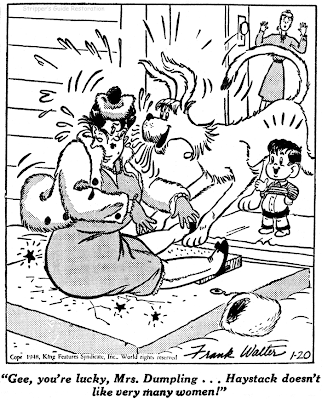 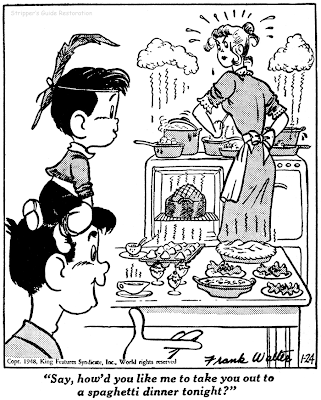 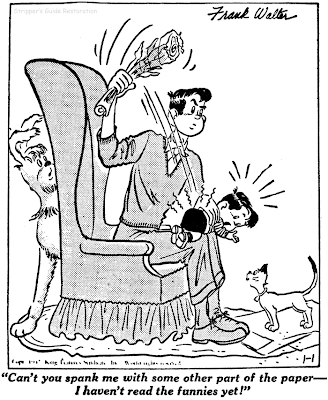 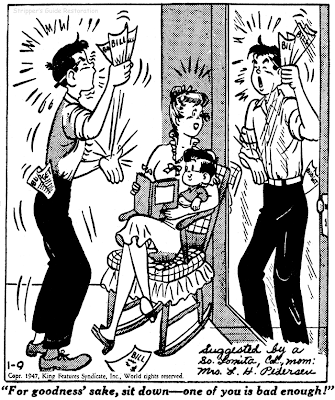 Here is a feature that gives us an excellent opportunity to discuss some of the qualities that separate the blockbuster features from the duds. Jellybean Jones, a panel series about a mischievous kid, pre-dates the very similar Dennis the Menace by five years. It began on March 4 1946, never took hold at many papers, and was cancelled after almost four years on January 14 1950.

Dennis the Menace, on the other hand,  hit newspapers one year after Jellybean Jones expired, took the newspaper world by storm and never looked back. The feature turned into a multimedia empire practically on a par with Peanuts.

Both panels are about a mischievous kid. So where did Jellybean Jones creator Frank Walter go wrong; what did he not do that Hank Ketcham did so very, very right?

The easy answer, of course, is that Ketcham was a genius, while Frank Walter was a mere mortal. Okay, fair enough -- that's a given. But what in particular attracted people to Dennis the Menace and not to Jellybean Jones, and what might the aspiring newspaper cartoonist  take away as lessons (assuming there are some left with that perhaps outmoded dream).

Here are a few of what I consider the glaring errors in the way that the Jellybean Jones feature was constructed. I think these should all have been dealt with before the feature was ever accepted for syndication, and I am frankly shocked that King Features was so blind as to not recognize the problems:

1. Character Design -- the star of the show seems to be pretty much right out of the "How to Cartoon" handbook. While Dennis is visually arresting and memorable, Jellybean Jones seems like a generic kid. The kid's design just screams 'I'm a cartoon kid, not different than the thousands of others you've seen.' Walter seems to have put as much thought into Jellybean's look as if he were drawing a one-off gag cartoon for a secondary market magazine. You can't look at Dennis, especially the early version of the design, and not recognize him as a little hell-raising bastard instantly. He doesn't look like any other cartoon kid ever before created, but there is some indefinable 'truth' in his design -- he seems real.

2. Lack of Focus -- in our five examples above, two of them focus specifically on the parents. That would be fine and dandy if the name of the strip were The Jones Family. But it isn't. The star of the show is Jellybean Jones, and he should never be a completely unnecessary extra character, just looking on from a corner of the panel. I would wager that in all the thousands upon thousands of Dennis the Menace panels that Ketcham did, a gag exclusively related to the adults appeared less than ten times. And I bet every one of those was submitted on deadline and out of desperation lacking a better idea.

3. Everyone is a Comedian -- this problem is exhibited by many features, and I don't understand why it is so commonly accepted in new features. It seems to me that you need a straight man in any feature -- someone who has their head screwed on right, someone with whom the reader can identify. Henry and Alice Mitchell are perfectly reasonable people who react like we would to Dennis' shenanigans (apart from whaling the tar out of the little brat). We can identify with them. The entire Jones family, on the other hand, is out there flinging one-liners like Henny Youngman, and there's nobody around to take the pie in the face, or get that wonderfully stormy and rueful "What did I ever do to deserve this" look of Henry Mitchell's. Worse yet, in Jellybean Jones the pie-thrower one day can be the straight man the next, and then switch off again the next day. Characters with consistent personalities are the bedrock on which gags are built.

Well, this post is turning out to be rather long, but unfortunately for you I'm not quite done yet. Before I close we must consider this person 'Frank Walter'. Everything about Jellybean Jones, from the art style to the gags, points to this being a production of the husband and wife team of Jerry and Linda Walter (creators of Susie Q. Smith, also from King Features). I dutifully did some web searching looking for a cartoonist by the name of Frank Walter with no luck, but I did find this newspaper article about Jerry Walter which states rather matter-of-factly that he and wife Linda created Jellybean Jones. Why they chose a pen-name for this second feature is unknown to me.

An interesting entry, to be sure. However, as a parent myself in today's world, I can find humor and identify with the characters and the jokes quite well. I think, given the right venue, this could be a big hit today!

Great analysis. I am reposting it in my Dutch comic artists group.