Obscurity of the Day: The Brownies Abroad 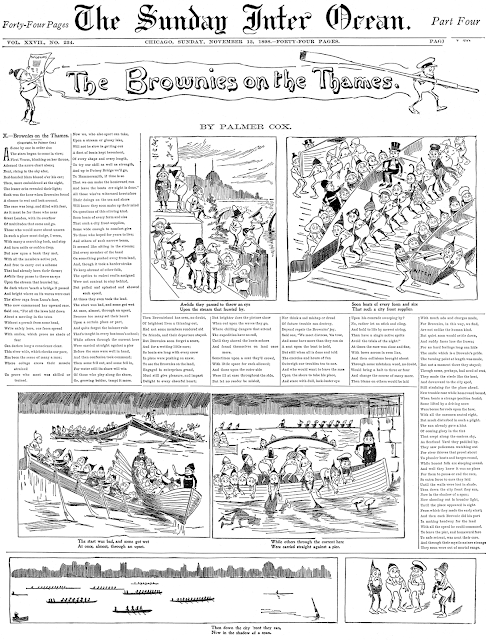 The Chicago Inter Ocean ushered in the age of multi-color newspaper printing in 1892, well before those Johnny-come-latelys in New York City, but they fell on hard times color-wise after the Columbian Exposition of 1893. Halfway through 1894 the color section of the paper was dropped, and that was the end of quite an important run. Not only did the Inter Ocean print the first color drawings and photos,but they also printed the first color newspaper comic strip, the first comic character series and quite probably other firsts that don't come to my mind at the moment.*

One of their less glorious firsts was that they were also the first to misappropriate a comic character. In early 1894 cartoonist/technician Charles Saalburg began a series in the color section featuring the Brownies, those stupendously popular characters of the late 1800s created by Palmer Cox. Apparently Mr. Cox was not consulted about this endeavor, because it wasn't long before the Brownie characters vanished and were replaced by a similar but not too similar group of impish characters, the Ting-Lings. Although I have no proof that the Brownies characters were used without permission, the fact that Cox received no credit, the drawings were done in-house, and the quick disappearance leave that as the obvious conclusion.

All that is preamble for the series we're actually discussing today, The Brownies Abroad. In 1898, just four years after the copyright infringement debacle, the Chicago Inter Ocean became one of the few newspapers to print this Palmer Cox series, which was offered in a run of twenty weekly installments.

The Brownies Abroad was soon after published in book form by The Century Company, but if you were an Inter Ocean reader, you got the whole book's worth free with your Sunday papers from September 11 1898 through January 11 1899.

For the record, though this series is awfully text-heavy to be considered a comic strip, I'm giving it a pass for its historical interest.

* These firsts are of course for color printing that was produced on the high-speed newspaper presses. Newspapers occasionally offered color items before this, but they were produced weeks or months ahead on low-speed color presses and later added into the newspaper as inserts.

Comments:
No idea if the series appeared elsewhere in the US, but the Toronto Daily Mail and Empire certainly published it: https://news.google.com/newspapers?nid=36&dat=18981119&id=YS4BAAAAIBAJ&sjid=uSgDAAAAIBAJ&pg=1961,1162057&hl=en as did the St John Daily Sun from New Brunswick https://news.google.com/newspapers?nid=37&dat=18981029&id=cnU1AAAAIBAJ&sjid=OykDAAAAIBAJ&pg=3258,2010361&hl=en

Thank you for those links Francis! I've amended the post.