Obscurities of the Day: Spot-Light Sketches and Meanderings of Minnie 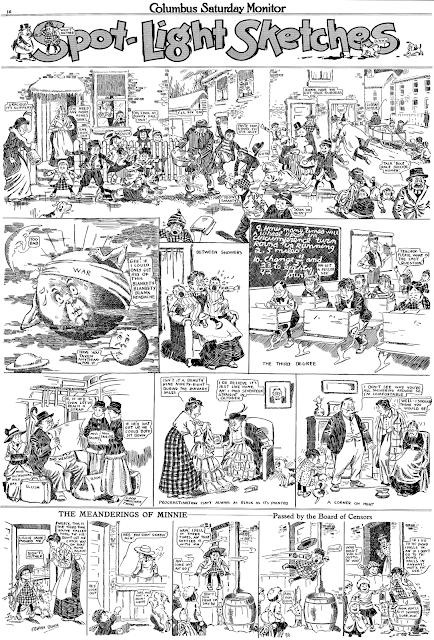 Edwina Dumm made her lasting mark on the world of newspaper strips with Cap Stubbs and Tippie, a feature that ran for an incredible forty-nine years (or fifty or even sixty years according to some accounts, but I can't find it running any longer than 1918-66).

Before her big break on the national scene she worked for the Columbus Monitor, a weekly newspaper that debuted in 1915, with Dumm lending a dose of graphic excitement right from the start on August 28 of that year. She began by producing a full page for each weekly issue, titled Spot-Light Sketches. Since Dumm was the only cartoonist in the paper at the time, she decided to fill every possible role; the page included editorial cartoons, social cartoons, single-panel gag cartoons, and comic strips. As a sad commentary on the times, Dumm originally didn't take credit for the impressive page, signing it "By Monitor", accompanied by a 'self-portrait' sketch of a male cartoonist! I guess this was not the era in which a woman cartoonist felt completely comfortable taking credit for her work, unless it involved romance, cute kids and/or cherubs.

On December 4, having produced the page for over three months, evidently Dumm felt she had proven herself as a competent cartoonist, wrong gender or not, and "By Monitor" was dropped in favor of her name.

On February 19 1916 the newspaper did a revamp, and the various cartoons of Spot-Light Sketches were now distributed throughout the weekly issues, putting an effective end to the feature. Meanderings of Minnie continued as a standalone. Then in July, the Monitor decided to go to a daily schedule, and Spot-Light Sketches was resurrected for their new Sunday edition. However, the Sunday edition only lasted a mere two weeks before it was deemed a sales failure, and the Monitor contented itself with a 6-days per week schedule from then on.For some reason, Dumm consigned not only Spot-Light Sketches to file 13, but also Meanderings of Minnie, ending both features with the issue of July 23. One could easily make the assumption that Dumm didn't feel up to a daily schedule, but this was certainly not true, as she was reportedly a remarkably fast artist. Dumm left the paper at this point, but returned for a short stint in 1917 right before the Monitor went belly-up.

Thanks to the late Cole Johnson for the sample.

Comments:
Hi there! Could you please share your source for the information about Meanderings of Minnie and What Bothers Minnie? Many thanks.

This is based on my own research of the Monitor.

Thanks! Is there a particular way that you would like to be cited in my research? Also, I would be very interested in learning more about your research on the Monitor. Would you be open to corresponding over email?

There is a standard format for citing blog posts; check Wikipedia for the format. And you're welcome to email questions, but please review the "emailing the stripper" post referenced on the sidebar.