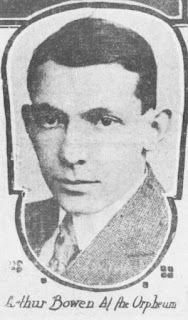 Arthur Laurence “Art” Bowen was born in Sleepy Eye, Minnesota, on August 2, 1881. Bowen’s birth information is in the Minnesota, Births and Christenings Index at Ancestry.com, which has a family tree with his full name.

The 1900 U.S. Federal Census said the Bowen family resided in Minneapolis, Minnesota, at 1317 Fourth Avenue South. Bowen was the second of three children and his father was a newspaper publisher.

In the early 1900s, Bowen went to Chicago to study at the Art Institute. The Minneapolis Journal (Minnesota), July 3, 1902, noted Bowen’s Christmas plans: “Arthur Bowen, a student at the Chicago Art Institute, is spending his vacation with his mother, Mrs. J. B. Bowen, 64 Eleventh street S.”

American Newspaper Comics (2012) nominated Bowen as a possible ID for the artist “Bow Wow” who produced the Beelzebub Boys and Uncle Tom in 1902.

Bowen filled in for C.F. Batchelder’s panel cartoons in the Chicago Daily News. For the Daily News, Bowen produce the Spotty Twins which ran for a year starting January 18, 1905. His next strip, Spotlight Steve in Vaudeville, started August 3, 1911 and ended eleven months later. For the McClure Syndicate, Bowen drew Always Take Mother’s Advice, Bub—He’s Always to Blame, and What Happens to the Herrings. All three began in 1912.


The Chicago Journal cartoonist, Mr. Arthur Bowen, will give an entertainment at Brownell School building, 65th St. and Perry ave., on the evening of Friday, January 29th. If you are looking for an interesting entertainment, pay 25 cents for a ticket and go see how he “makes chalk talk.” Proceeds to to Parents’ Club, whose aim is to assist the school.


A chalk talk and musicale will be given at the Brownell school, 65th St. and Perry ave., this evening. Cartoonist Arthur Bowen will give his best illustrated talk.


In spite of the severe weather Mr. Arthur Bowen, cartoonist, found a large number eager to hear his lecture on Friday evening at Brownell school. The chalk talk was both entertaining and instructive and many a boy left the assembly room with a strong desire to be a newspaper artist.

The “Singing Cartoonist” was noted in The Independent, December 10, 1910: “Arthur Bowen, the singing cartoonist, is a versatile entertainer and a clever crayon artist, and his combination of black and white art, with songs, is most attractive.” The San Francisco Call, March 31, 1912, wrote: “Art Bowen, a singing cartoonist, whose comic sketches, ‘Spotlight ’ are now running in the New York World, will sing several songs, illustrating each with cartoons to suit the words.” The Courier (Harrisburg, Pennsylvania), November 17, 1912, had this report:

Art Bowen Singing Cartoonist
It is one accomplishment to be a cartoonist and another to be a vocalist, but Art Bowen, who is booked to appear on this week's bill is both. out for a whole evening's entertainment. In "Song Revue" vaudeville has .what might be termed its most elaborate production. This act without a doubt is the largest offering from a scenic view point that variety holds. He can draw more clever and laugh able things in about the fifteen minutes he is on view than most of his rivals and all the while entertains with his good baritone voice, which is a host in himself. He can write and heard in numbers that correspond in some respects to the subjects he is drawing. Art Bowen is sure to make render a popular song with as great effect as anyone the stage boasts of, it.

Bowen has not been found in the 1910 census. At the time he was touring the country.