Obscurity of the Day: Spotlight Steve in Vaudeville 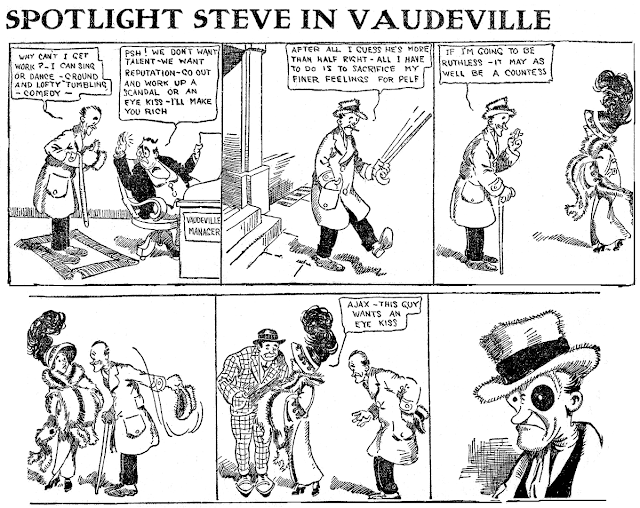 Spotlight Steve in Vaudeville was a weekday strip in the New York Evening World from August 3 1911 to July 6 1912, Art Bowen's only series for the Pulitzer organization. As usual, Bowen provides nice eye-catching art. In this series he manages better gags than usual, perhaps because vaudeville was a subject near and dear to his heart, as he was also a performer, drawing caricatures and singing.

Regarding the sample strip above, the term "eye kiss" is literally what it says, a kiss on the eye(lid). The term was popularized in the public mind due to a $50,000 breach of promise suit between a pair of lovers in 1911. During the trial it came out that the young fellow had a penchant for giving his gal 'eye kisses' and signing his love letters with an eye followed by the letter K. She in turn found that the fellow's eye-kissing habit, um, revved her motor efficiently, you might say. Unfortunately it turned out that eye kisses, while delightful, were not enough to make her go through with the marriage. The case was unusual in that typically it was men being sued for breach of promise, and this case was the opposite -- the lady, as you might guess, was a well-loaded heiress. The young swain was unsuccessful in his attempt to gain restitution.