Obscurity of the Day: Horrorscope 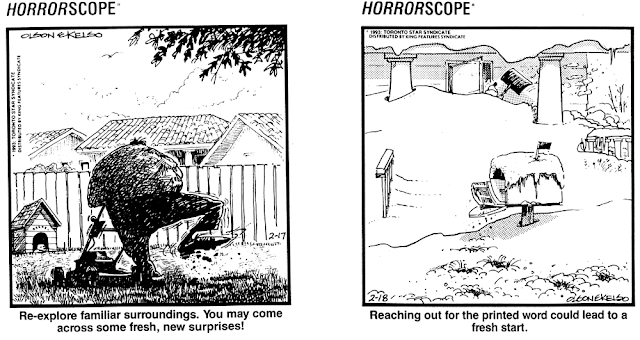 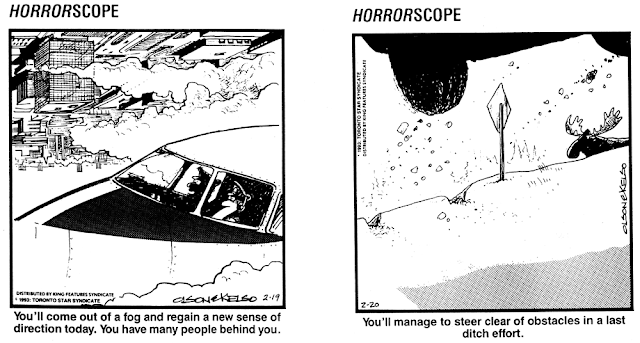 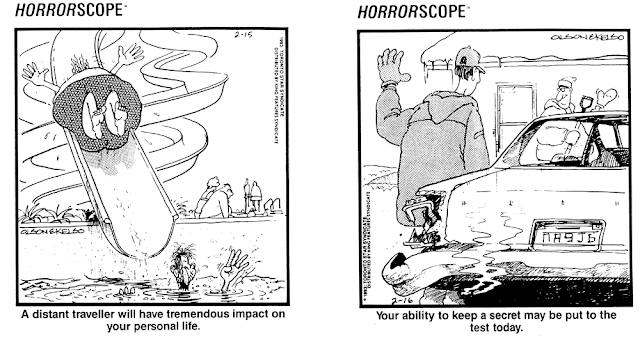 Winnipeg, Manitoba-based writer Susan Kelso came up with an intriguing cartoon idea. What if your daily horoscope did actually come true, but the result was very much different than what you envisaged when reading it. She liked the idea so much that, without knowing anything about newspaper syndication, she talked artist Eric Olson into a partnership to create and market Horrorscope.

The feature's rollout certainly didn't set any circulation records, but evidently there were enough clients to please the creators and syndicate. At least two reprint books were issued early in the life of the feature, a self-titled collection and More Bad News.

After a five year stint Eric Olson decided to leave the feature, and another Manitoban, Adam Rickner, was brought on to take his place. Rickner lasted three years, and Carol Kemp then became the third artist on Horrorscope.

In 2000, Susan Kelso dropped out temporarily for some reason, and Kemp was credited with both art and writing for awhile. Soon Kelso was back, and the feature ran without any further creative defections until 2006, when it seems to have been dropped from syndication and from its home paper, the Toronto Star.

A couple oddities to note -- first, the feature was consistently advertised to have a Sunday version; I've never seen a true Sunday of Horroscope, but I have seen on a 1993 King Features proof sheet that one week's worth of the feature seemed to comprise a total of seven daily-style panels. Very unusual, to say the least.

Second, in trolling around the web for information about Horrorscope, I was surprised to find that there was another daily panel by that same name that ran from 1986-89 in the San Bernadino County Sun. That one was by a fellow named John Weeks. You can check it out on newspapers.com if you are intrigued.

Comments:
Man, I haven't thought about "Horrorscope" in years. When I lived in Japan, the Daily Yomiuri (an English-language newspaper published by Yomiuri Shimbun) ran this panel every Sunday. I believe they ran the "Sunday" panel, which was in the same black and white format as the Monday to Saturday panels.

I remember Carol Kemp's art the most.

It was just mentioned on RACS that Adam Rickner died last year.