Obscurity of the Day: Naughty Ned 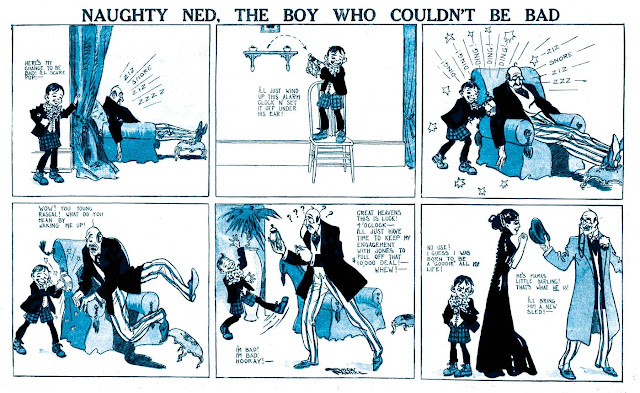 When I was prepping Naughty Ned to become an Obscurity of the Day, I thought I'd just be commenting on the interesting little switcheroo this strip plays on that boring old comic strip mainstay, the rotten little prank-pulling brat. In Naughty Ned, y'see, the kid wants desperately to be a nasty li'l bugger, but just can't seem to pull it off properly. Talk about an underachiever!

I was going to talk about that, but then I idly typed the creator's name into Google, and things got more interesting. Turns out that Munson Paddock, the creator of Naughty Ned and a short list of other okay but not greatly memorable strips of the late 1900s, has a bit of a fan club among the Golden Age comic book enthusiasts. Seems that Paddock was still cartooning 30-some years later, and his comic book work, especially the sci-fi stuff, has attracted interest.

Well, that's kind of neat, but then I find, if we are to believe these websites, that Paddock went by a laundry list of aliases as well. One of the sites, in fact, claims that Paddock was a woman -- Cecelia Munson Paddock. That seems to be a minority opinion, but another of the cited aliases also perked up my ears. Supposedly Walter Frehm, aka Walter Frame, is also a pseudonym of Mr. or Ms. Munson Paddock. Well, now hold on just a gosh darn second. I think Mr. Frehm, who was a member in good standing of the NCS, would like to keep his status as a real person.

Given all this hyperbolic biographing of Munson Paddock, I think I'll go back to stating what I do know. And that ain't much. But I can tell you that Mr. or Ms. Paddock's Naughty Ned, which is the only strip series s/he did for the Philadelphia North American, ran from March 4 to June 20 1909. That's my story, and I'm sticking to it.

Comments:
For what it's worth, there's a Munson Paddock, occupation artist, living in Manhattan in the 1910 census, according to ancestry.com. Born January 22, 1886 in Racine, Wisconsin The 1920 census lists him still as living in New York, and married to Margurite Paddock. I also seem him in the 1930 census, but without the wife. His 1942 draft card has him living in Bergen, New Jersey, and unemployed.

I should note, by the way, that there's also a Social Security record for him, indicating he was living as late as June, 1963.

Sorry for the serial comments: The World War I draft card lists him as married to Margurite, and lists him as a free lance commercial draughtsman. Blue eyes, brown hair, tall and of medium build, as of 1918.

A public tree on ancestry.com has him dying in 1971, no place listed.

I'm sure Alex will straighten everything out
but...Frehm creating The Green Mask and then him and others using the Walter Frame pseudonym on the feature probably got some
jumbled over the years.
D.D.Degg