Obscurity of the Day: Popular Pilots 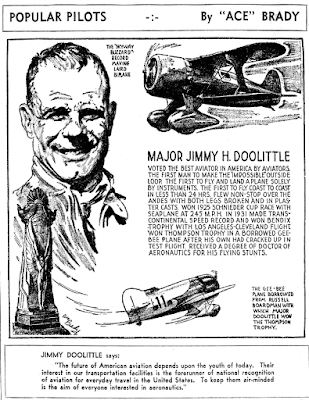 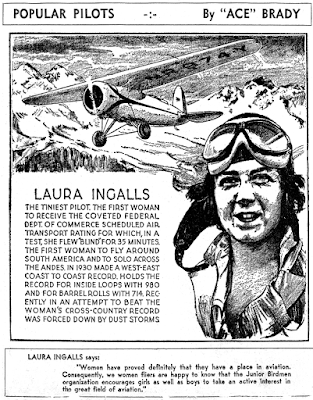 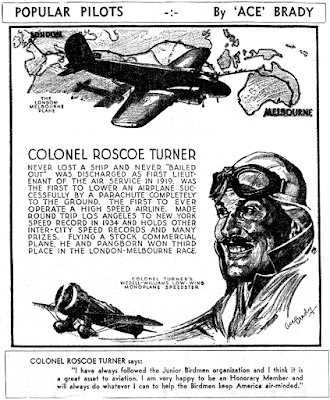 We've discussed Hearst's Junior Birdmen weekly aviation pages before, and here's another of the cartoon elements of those pages. Popular Pilots ran on the pages from April 28 to sometime in July August 28 1935, a very short run. The panel offered up not only capsule biographies of famous aviators, but quotes attributed to them, in which the Junior Birdmen are invariably said to be the best thing for American youth since the invention of the Baby Ruth.

'Ace' Brady, who signs the panels, is an enigma. Many of the Junior Birdmen features were credited to famous aviators, and I guessed that was the case here. But I find no senior birdmen who went by that moniker. I'm also not aware of any cartoonists named Brady who would be likely suspects for penning this feature.

Comments:
Checking the FultonHistory site I found the panel appearing in a couple August editions (18th and 25th) of the Albany Times-Union.
While those retained the title line with the "by 'Ace' Brady" credit, the panels were signed by Jon L. Blummer.
From the same site I got the September 1, 1935 issue of the Syracuse American which had an introduction to the forthcoming Air Conquests. That intro said that Air Conquests "will be drawn by the famous artist who so ably portrayed the activities [of pilots] published on this page known as 'Popular Pilots'."
So I'm starting to think that Ace Brady is Jon L. Blummer (of Hop Harrigan fame). Apparently there was some scandal in the family in the '20s so he may have used the Brady penname before settling on Jon L. Blummer.
D.D.Degg

Hi DD --
Sounds like Jon Blummer's our guy. But I'd like to verify that the art style on my samples and the later ones you found match up. I've been beating my head against the Fulton wall for a few hours now, and I just cannot tease those pages you refer to out of that darn website. I even tried a mass download of Syracuse American to no avail. PLEASE can you post links to these pages?

Hope all those links are right and will work. A Fulton search of Popular Pilots as an exact phrase brought up the results.
D.D.Degg

Thanks very much for the links DD. I must confess that I did not think to try the internal search on Fulton's site, as I've never had it work in the past. I was doing site searches using Google.

Okay, I'm convinced Blummer did both the credited and uncredited panels. The Kingsford Smith panel is a dead ringer.