Obscurity of the Day: Terry 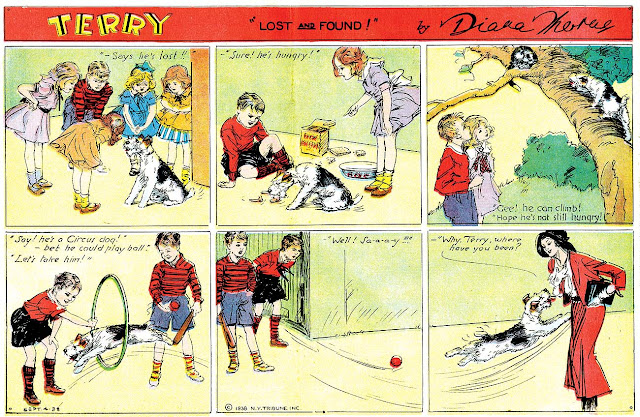 In the 1930s Diana Thorne was becoming very well-regarded as an accomplished animal artist. Her favorite subjects were dogs, and she drew them for books, magazine covers, even taking commissions to make portraits of the dogs of the rich and famous. She was especially well-known for her childrens books, which she produced in great numbers.

Because of her increasing fame, it's not certain whether she approached the New York Herald-Tribune, or they approached her, to create a Sunday comic strip series. But one way or the other, she did create Terry, a Sunday-only strip about a dog (a terrier I presume).

Generally speaking, Thorne did not participate in the writing duties of her children's books, so I'm guessing there might have been an uncredited writer on Terry, but that also is unknown. What I do know is that the strip did not catch on (a common problem for the New York Herald-Tribune, which seems to have had a really ineffective marketing department), and Thorne probably decided pretty quickly that the strip was not worth her valuable time. Terry ran from March 5 1938 to February 25 1939, indicating that Thorne and the Herald-Tribune were perfectly fine with parting ways at the conclusion of a one-year contract.

For much more information on Diana Thorne, see this website.