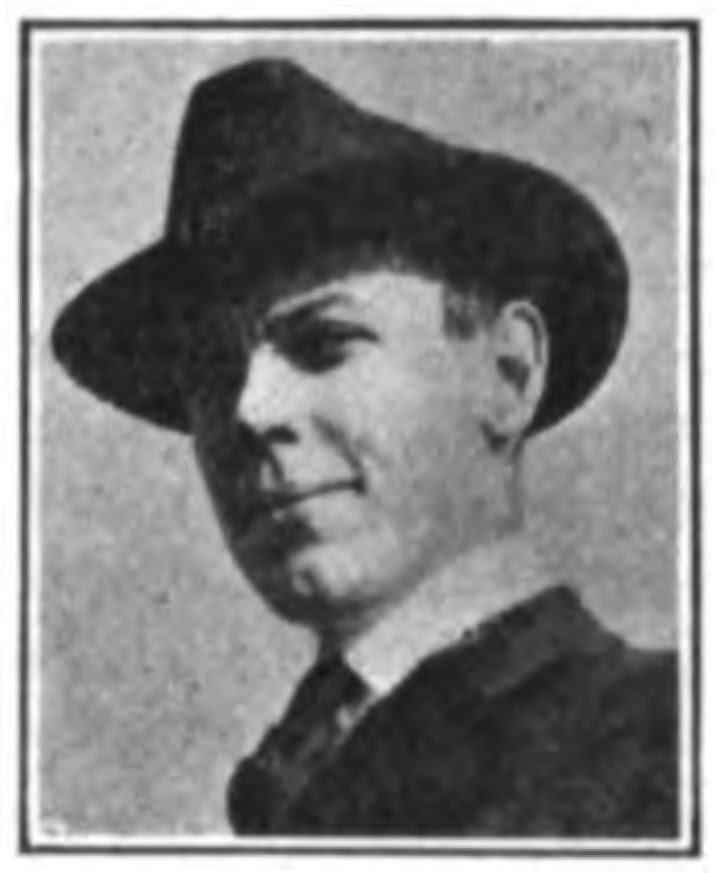 Harold Edward “Hal” Probasco was born in Binghamton, New York, on July 2, 1895, according to his World War I draft card. In the 1900 U.S. Federal Census, Probasco was the only child of Gurdon, a nurse, and Anna. They resided in Binghamton at 9 Milford Street. The same address was recorded in the 1905 New York state census and 1910 national census.

In 1910, Probasco was a newsboy with a daily paper. A few years later, he came under the guidance of Eugene “Zim” Zimmerman.

Probasco signed his World War I draft card on June 5, 1917. The card said he resided in Manhattan, New York City at 328 West 57 Street, and was an advertising artist employed at Fidelity & Casualty Company, 92 Liberty Street, New York City. He was described as tall and slender with gray eyes and brown hair.

Owego, N. Y., July 26.—Harold E. Probasco of New York City, formerly of Oswego, recently obtained an engagement as a cartoonist with the Central Press Association, of Cleveland, Ohio, one of the largest newspaper syndicates in this country. His work is now appearing in the newspapers of more than 50 cities in the United States. Mr. Probasco’s headquarters are in New York City, where he has an office in the Pulitzer building in Park Row. Some of his work has appeared in the Elmira Star-Gazette and has been noted by his many friends in this village, who expressed highly complimentary opinions concerning it.

About three years ago Mr. Probasco went to New York City with the intention of “breaking” into the “cartoonist” field there. He had few acquaintances in the city and he was absolutely without friends in positions of influence. He did carry, however, in addition to a bunch of clever pen and ink drawings, letters of introduction from Eugene Zimmerman, of Horseheads, the “Zim” of nation-wide fame. Mr. Probasco had received some instruction from Mr. Zimmerman. Their acquaintance began a year or two before, while Mr. Probasco was living at Hiawatha. He plastered the old ferry boat, run at that time by the late Mrs. Effa Ann Barton, with several samples of his drawings. While on a motor trip Mr. Zimmerman saw these drawings, and made inquiries which led to a meeting between the veteran and the youngster. Mr. Zimmerman entertained Mr. Probasco at his studio and then offered to give him free instruction, which offer he quickly accepted and from which he greatly profited. 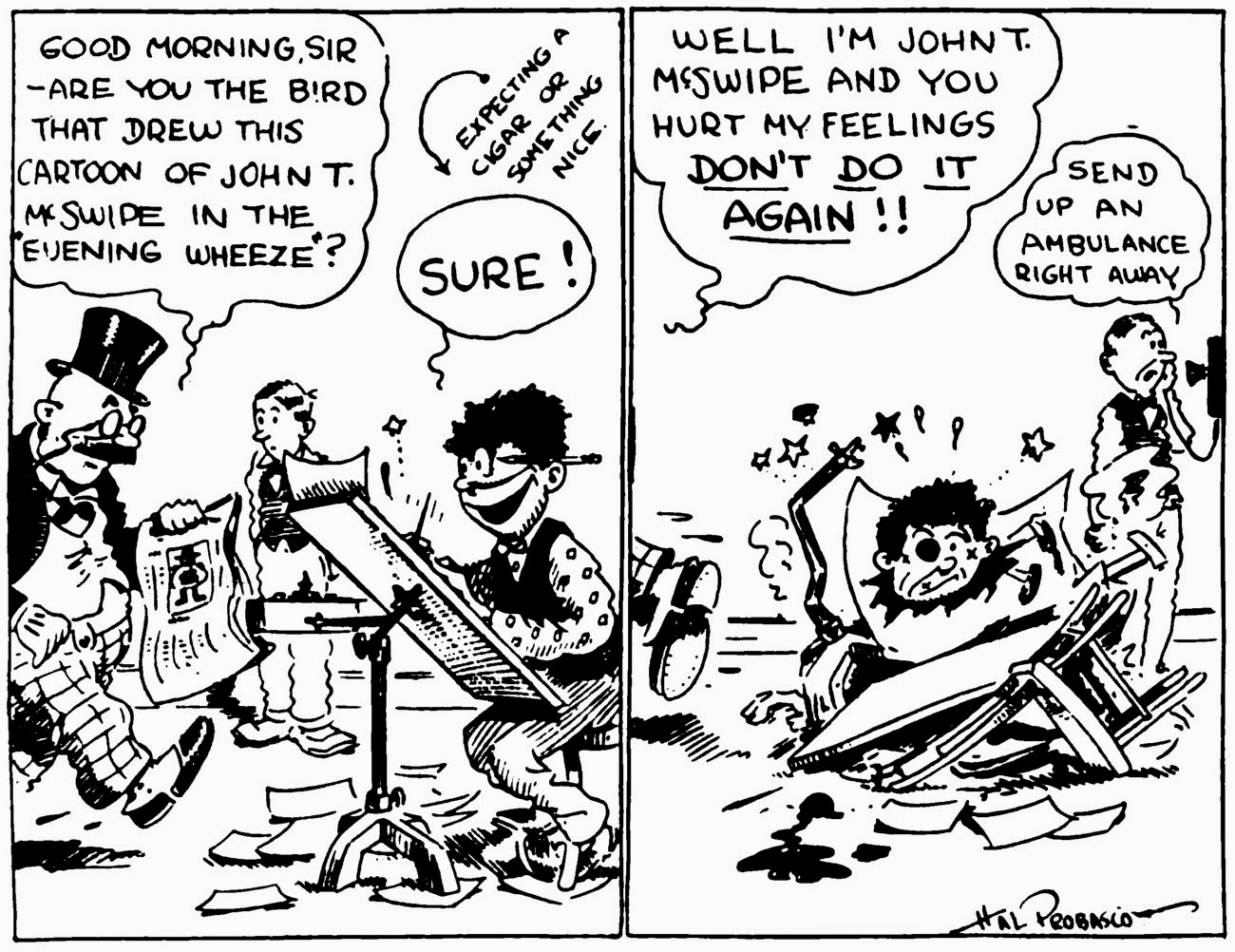 Probasco has not yet been found in the 1920 census.

Young Cartoonist, Native of Oswego and Product of Binghamton Schools, Had Made Excellent Progress with Drawings

Harold E. Probasco, a cartoonist, native of Oswego and distinctive product of Binghamton schools, who had been winning name and fame with pen and ink in the Middle West, died last Sunday morning after an illness of two weeks duration from inflammatory rheumatism, which fatally attacked the heart at his home in Cleveland, Oh. He had been in failing health for many weeks.
Harold Probasco was the son of Gordon C. Probasco, for years resident of 9 Milford street, this city. His father for many years was an attendant at the Binghamton State Hospital and the family was prominent among residents of the East Side. His father’s death occurred about three or four years ago, just when fame was coming to his talented son.

The young cartoonist was in a large sense, self-made. He discovered his own natural talents as a cartoonist, and also developed an excellent sense of proportion of facts, and handled them in cartoon form. When he was only a little more than 15 years of age—and that was about 12 years ago—his work took on the firmer touch of maturity. He was still a student in the public schools, and is remembered for his vigorous young life and his talents as a student. While some of his work found publication in the local press he sought broader fields afar, and soon had won the friendship of Zimmerman “Zim” a native of nearby Horseheads, N.Y., and thereby gained broader vision. “Zim” is the chief artist of “Judge” the comic weekly. As a result of his new ideals Mr. Probasco turned to the larger cities and began to carve a name for himself.

He finally scored success in two new series of productions that drew the public eye—“Terrible Tessie” and “That’s Different.” He located in Cleveland, Ohio, where he made his home. Of recent months he had been specializing in sport cartoons and had established himself among the leaders in that type of drawings when he was taken ill. Many of his cartoons have appeared, from time to time, in the columns of The Binghamton Press.

Mr. Probasco was with the Cleveland branch of the Central Press Association of New York city, and upon his wedding day, Oct. 27 [sic], last, the head of the concern was present and promised him a position in New York city this spring.
He was born 28 years ago, on July 2, 1895, at Oswego, Tioga county, N. Y. Last October he was married to Miss Helen Byington, who survives him; also his mother, Mrs. Anna Archibald of Owego, formerly of this city.

The funeral will be held at 2:30 o’clock Thursday afternoon at the home of his mother in Owego, N.Y., and burial will take place in that village.

On April 25th, the Binghamton Press published a summary of Probasco’s death and a photograph. 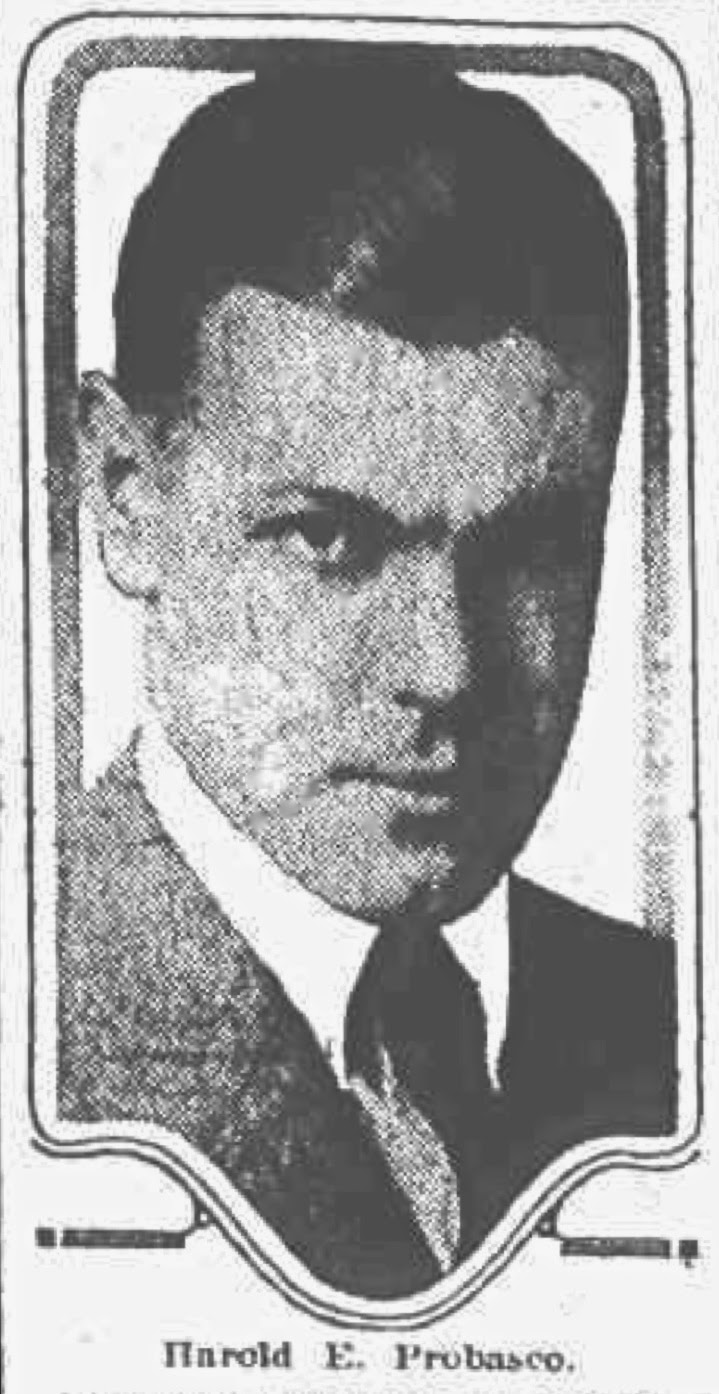