Obscurities of the Day: Terrible Tessie and That's Different 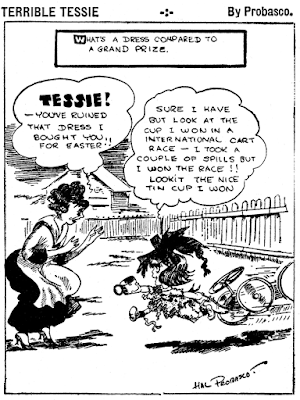 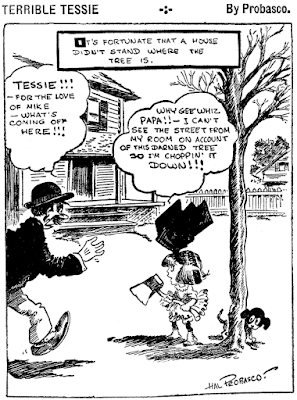 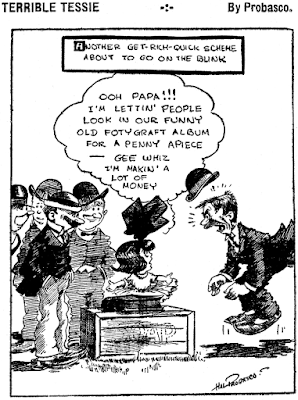 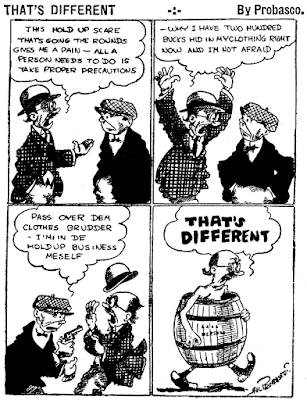 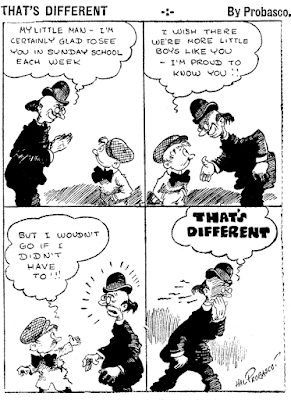 A promising young cartoonist named Hal Probasco came up with a unique, if not tremendously original, idea in newspaper comics in 1919. Apparently recognizing the high mortality rate of new comic series, he decided not to put all his eggs in one basket when he got his big chance. When the Central Press Association offered him a whack at syndication, he created not one but two features, and they were to appear on alternating days. The first (which actually ran a full week at the outset as the only title) was That's Different, a tepid strip in which some unexpected thing happens, and someone ends the strip by uttering the big gag line "That's Different". Hilarious, yeah, I know.

Just one week in, Probasco was already realizing that two things could happen, neither of them good. Either readers would get sick of this weak concept in pretty short order, or they'd like it so much that Probasco would be condemned to thinking up six of these dumb gags every week, perhaps (gasp!) forever. So, starting the second week,  Probasco decided that he could handle three That's Different gags each week without courting madness, and added a second feature titled Terrible Tessie to run the other three days. Terrible Tessie was a better idea, but still not terribly original. The titular little girl is a little hellion who constantly gets in trouble, but Probasco paints her as unintentionally so -- more Dennis the Menace than Katzenjammer Kid. Terrible Tessie was by far the better feature, but for some reason Probasco stuck with both throughout the three year run.

As best I can tell, the running dates for the features break down thus: That's Different began on June 9 1919, and last appeared April 29 1921. Terrible Tessie (a week late, remember) began June 17 1919 and ended April 30 1921. Few papers ran the feature(s) with perfect consistency, and I see a lot of the strips running late, but triangulation between several papers gives me these tentative dates for the 'official' run.

Comments:
What is the large, irregularly shaped black object that appears above Tessie's head in all three of the above panels supposed to be?

It's a ginormous hair ribbon.