Obscurity of the Day: Akwas 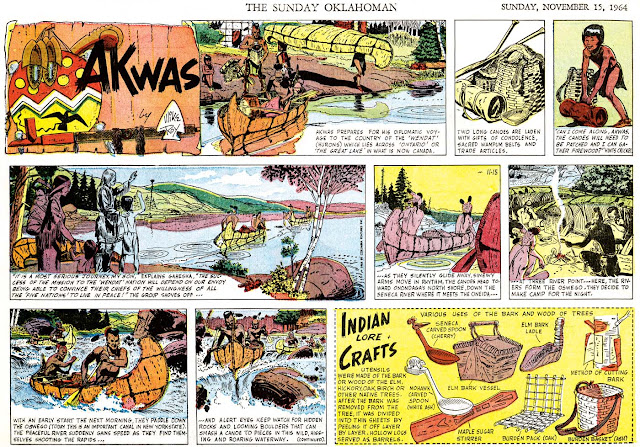 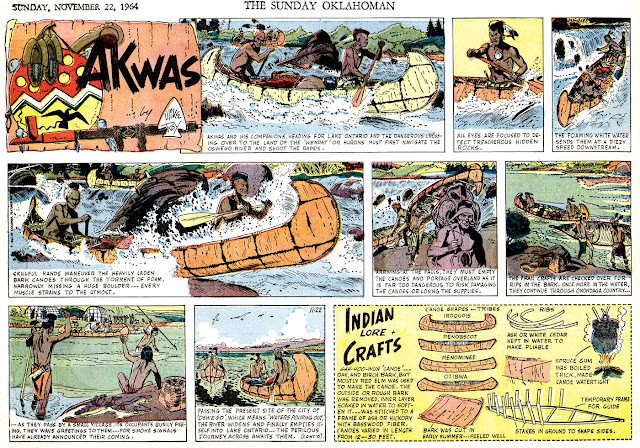 The Columbia Newspaper Syndicate introduced a succession of well-crafted features in the mid-1950s to early 1960s, many even featuring popular licensed characters, yet couldn't seem to make anything stick. Perhaps their fees were too high, or newspaper editors weren't keen on taking material from a young and untested syndicate, but whatever the reason, a lot of pretty interesting features languished in obscurity.

As far as I can tell, Columbia's last attempt to syndicate a new strip was with the Native American adventure strip Akwas. Akwas was a well-researched quality production, taking queues for story-telling style from Hal Foster's Prince Valiant. This was no 'horse opera' silliness, but a realistic tale of an Iroquois brave in pre-Columbian times.

The production was helmed by Mike Roy, who was a Native American himself. He had a long career in both comic books and newspaper strips, but Akwas was certainly a project that was near and dear to his heart, and it must have been crushing for him that it couldn't seem to establish much of a foothold in newspapers.

The Sunday-only strip began on June 7 1964, and evidently a few high-profile newspaper clients, like The Oklahoman and the Cleveland Plain Dealer, were not enough to put it on a paying basis. In the strips of January 1965 Roy started to look a little desperate, pandering for readership. He had Akwas get captured by a rival tribe, where he was put through a long series of gruesome tortures over the span of several Sundays. Although I have never seen any later strips than January, one report I found on the internet claimed that Roy even tried giving Akwas super powers at the tail end of the run, though I'm a little skeptical of that.

As I said, I've not seen any strips later than January. However, Rick Norwood in Comics Review said that the last Sunday was published on March 27 1965, two months shy of a one-year run. As was typical for Columbia, the strip continued to be offered in the E&P yearbooks until 1972, but no new material was created and as far as I know no paper took them up on running the strip in reprints.

Comments:
I wonder if any effort was made to market this as a book or even a classroom product. An accurate historical view of Native Americans would have been a hotter ticket just a few years down the line.

You should have seen the later Akwas; I sent them to you in March -- http://www.mediafire.com/download/k7k7le76k5tq5fl/Akwas_Rev_1.rar