Obscurity of the Day: Stuttering Sammy 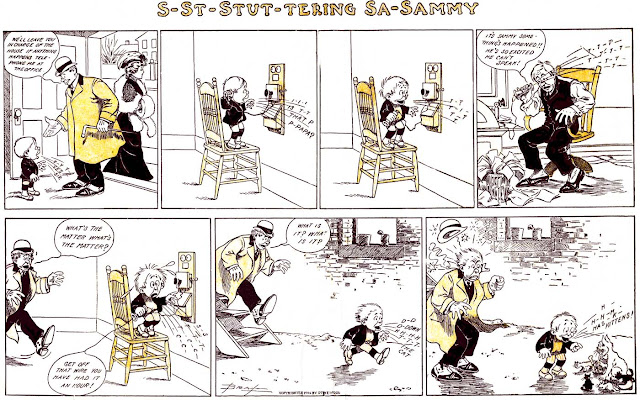 What is a poor turn-of-the-century newspaper cartoonist to do once all the good ethnic groups have been taken, and you can no longer get away with doing a 'me-too' strip making fun of the accents and foibles of the Irish, Germans, Swedes, Italians, blacks, Asians, etc? Maybe you come up with an idea that's genuinely humorous and doesn't make fun of someone based on their skin color or national origin?

Nah. John R. Bray's solution to that tough problem was to look to other conditions that can be ridiculed. Hey, how about stuttering? Why that's absolutely hilarious! Thus was Stuttering Sammy, or as it was often written in the heading, S-St-Stut-tering Sa-Sammy, born in the McClure Sunday comic section of June 17 1906. The gags were exactly what you might expect -- Sammy needs to tell something important (or not important, as in the sample above) but can't get it out in time. Mayhem ensues.

Although I condemn Mr. Bray for picking on stutterers, I must admit that he actually tried to redeem himself on the issue. Starting with the episode of May 19 1907, he had Sammy realize that he could manage to get out his important messages if he would sing them --  this is actually a pretty common solution for stutterers to work around their affliction. The strip was retitled Singing Sammy, and the gag became that little Sammy had to belt out a song in order to communicate.

Apparently this gag wasn't nearly as effective as the stuttering material, because Bray ended the series shortly after (or his one-year contract for producing the strip ran out). The final episode was run on June 23 1907.

Thanks to Cole Johnson for the sample strip.

Comments:
Mocking people's differences seems to have been a keystone of late 19th / early 20th century popular culture. A number of old songs picked on stutterers. The only one to become famous was "K-K-K-Katy" recorded in 1918 by Billy Murray. The record includes a sketch in which a stuttering soldier tries to romance his girlfriend while his army buddies taunt him. It was a huge hit (#3 on the charts!) and was later covered by Porky Pig.

Apparently "Stuttering" comedians were a longstanding tradition on the music hall/vaudeville houses for a long time. Joey Frisco was a top star a hundred years ago famous for his stuttering singing and joking. If you're an old film fan you may recall Roscoe Ates and Tom Dugan, who did stuttering acts for many years, though both dropped it when it became passé. I guess the last of this cohort was Porky Pig.

The stuttering song form was revived (a tiny bit) by Roger Daltrey on "My Generation". Love the song, but could never understand the reason for the stuttering.

Allan, I know that a few years have passed since you posted this comment, but I can explain Roger Daltrey's stuttering on "My Generation." The Who's manager, Kit Lambert, suggested to Roger that he stutter to sound like a British kid on speed. Daltrey told Uncut magazine October 2001: "Kit Lambert came up to me and said 'STUTTER!' I said 'What?' He said 'Stutter the words – it makes it sound like you're pilled'... It was always in there, it was always suggested with the 'f-f-fade' but the rest of it was improvised."