Obscurity of the Day: Tom and his Little Brother Jerry 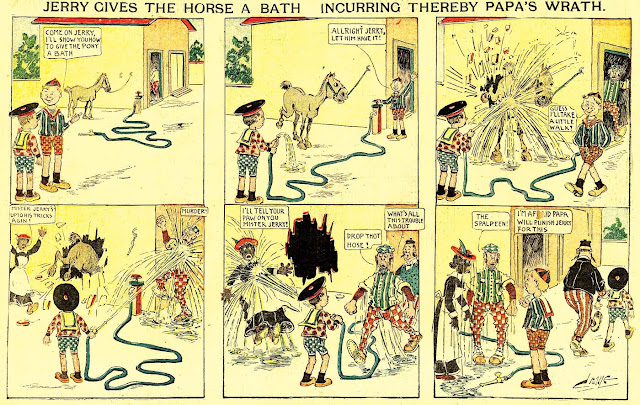 In 1904 cartoonist Frank Crane was producing two well-known and already long-running Sunday comics for the Philadelphia North American, Muggsy and Willie Westinghouse Edison Smith. So what prompted him, I wonder, to produce a series for the nascent and struggling World Color Printing outfit?

Whatever the reason, his entry for WCP, Tom and his Little Brother Jerry, was certainly not a strip that figured to be a hit. Crane was one of those endlessly repetitive fellows who would milk the same gag year in and year out, and the gag here -- an older brother delights in getting his little brother in trouble -- wasn't exactly a gangbuster laugh-producer to begin with. But once Crane was set in motion, like one of those plastic birds that drinks from a cup, it was hard to get him to stop. He ended up producing the strip from May 8 to November 6 1904, an absolute eternity by the standards of the early World Color section, which evolved constantly.

By the way, for whatever reason Tom seldom got headline billing after the first month or so of the strip, which led me in my book to list "Tom and his Little Brother Jerry" and "Jerry" as two separate strips by mistake.

Thanks to Cole Johnson for the strip scan.

Oh, and if you're wondering about 'spalpeen'? Dictionary says it is Irish slang for a rascal.

Comments:
Say what you will about his tired old gag, but you have to love his fashion sense! What a spalpeen.