Obscurity of the Day: That's Frieda 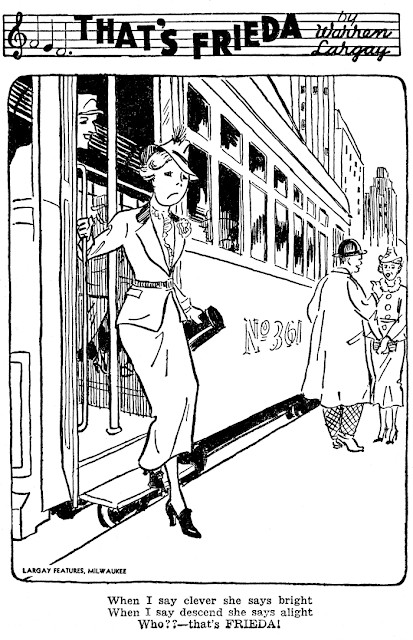 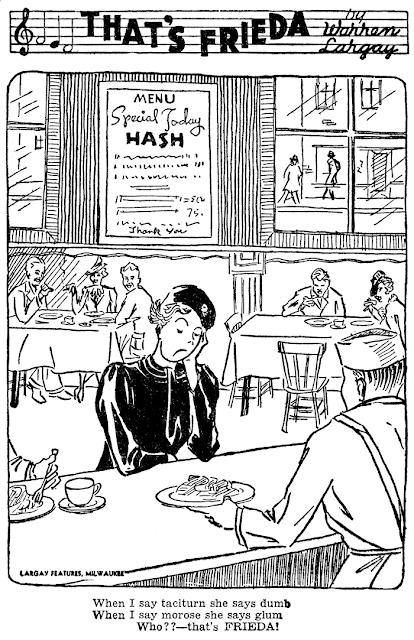 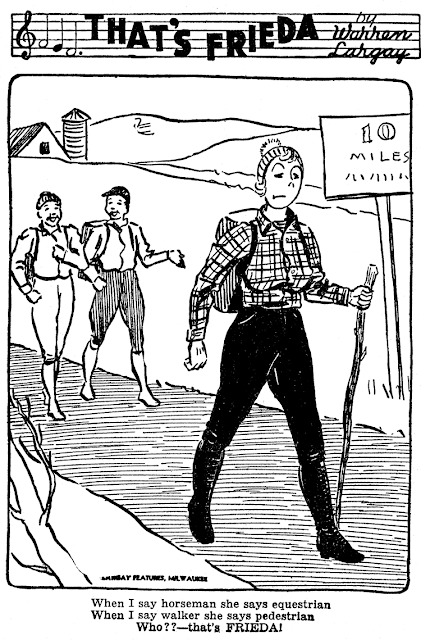 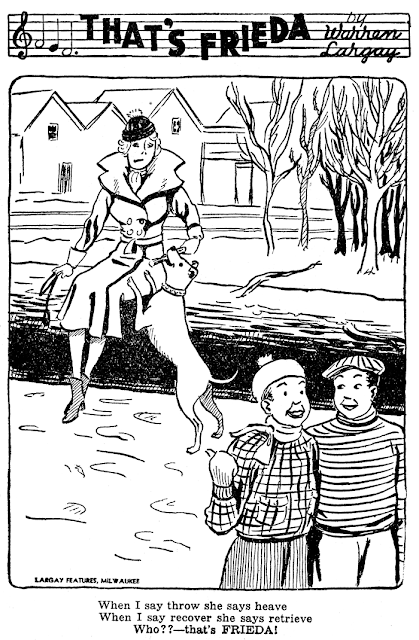 I think of the typical newspaper features editor as a person who's seen it all a million times, and rejects 99% of the prospective features that cross the transom with hardly a second's thought. But then I see a feature like That's Frieda, and I begin to wonder if my conception is all wrong.

I can just image Warren Largay walking in to see the features editor at the Milwaukee Journal, explaining that he has a feature that's entirely new and different from anything before seen, and it's going to be a big, big hit for some lucky paper. "Y'see, it's a feature that educates and entertains at the same time. I'm real sneaky about the education part; I teach readers the meanings of words by giving their synonyms. Like I pair 'equestrian' with a simpler term 'horseman', see? But it's not just that, because each one is told in a lilting musical verse. And I've got this great character, Frieda, who knows all these synonyms and drives people batty using them all the time. She's a real sourpuss and everyone laughs at her behind her back. She's a million laughs, right? So in each panel you get a vocabulary lesson, a song, and a hilarious cartoon featuring my character, Frieda."

The features editor I have in mind had ushered Warren out of his office about half-way through that pitch. But, miraculouly, the powers that be at the Milwaukee Journal said they'd give it a try. Maybe Frieda said the magic word Gratuitous, as in Free, and that won the editor over. That's Frieda debuted there as a daily on November 30 1936.

Strangely, though, the panel did not immediately inspire fan clubs. The Journal thought better of their rash decision after just three weeks, and That's Frieda last graced their pages on December 18.

But our story isn't over. Largay then went to a competing paper, the Milwaukee Leader, and talked them into running That's Frieda. Maybe Frieda once again flashed her big vocabulary, mentioning the term Unrecompensed, as in No Charge. I don't have definite running dates for That's Frieda in the Leader, but it definitely appeared there for at least three months, January through March 1937.

As far as I know, that's it for Frieda. Most likely after having people laugh behind her back for four months, she walked out onto an ice floe in Lake Michigan and said "Goodbye Brutish, as in Cruel, World". I don't know if Warren Largay made any other forays into newspaper cartooning; while That's Frieda was patently awful, in fairness he was a perfectly passable cartoonist and I do hope he tried again.