Obscurity of the Day: Good and Bad Cats / Puzzling Problems for Moden Mothers 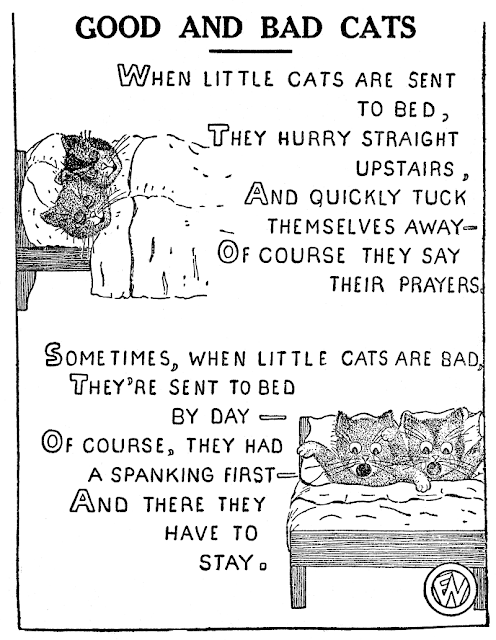 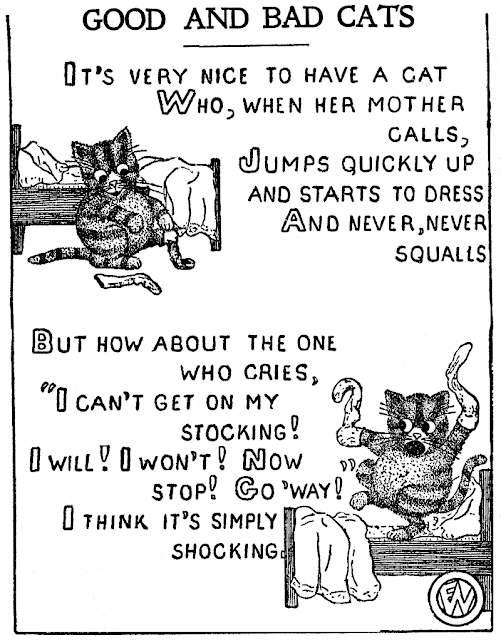 A while back we discussed the very short-lived News Syndicate, which offered a weekly page for children in late 1910 to early 1911. Captain Toodles was certainly the most attractive comic they offered, but they did include a second one. That was Good and Bad Cats by Frederick White, also sometimes titled Puzzling Problems for Modern Mothers (these ones are more of a comic strip format, but the good vs. bad cat concept is still the same).

The series is passive-aggressive parenting at its finest. Most installments point out the difference between good little kitties -- those that never cause mama any trouble -- and bad kitties who can't seem to get with the program and leave mama in blissful peace. "Here junior, look at that bad kitty-cat, and how he has trouble putting on his socks. Now won't you be a good kitty and learn to put on your socks without mama's help? Cause you're really cutting into my me-time, ya brat."

While Captain Toodles only ran a paltry six times, Good and Bad Cats managed something like eight to ten installments (I'm unsure because I still haven't found a newspaper that printed this page reliably every week). This feature was probably also reprinted from Good Housekeeping, as was Captain Toodles. The feature was adapted into a book in 1911 with some additional material included, but it all seems to be reprinted -- an assumption I make since White signs each panel/page as if it were standing on its own.

Good and Bad Cats debuted in its newspaper run as an untitled feature on the children's page for November 6 1910. Gaining a title the next week, it ran sporadically on the weekly sheets almost until the end of the page itself; the last installment seems to have run on March 19 1911.