Obscurity of the Day: The Foxy Mice 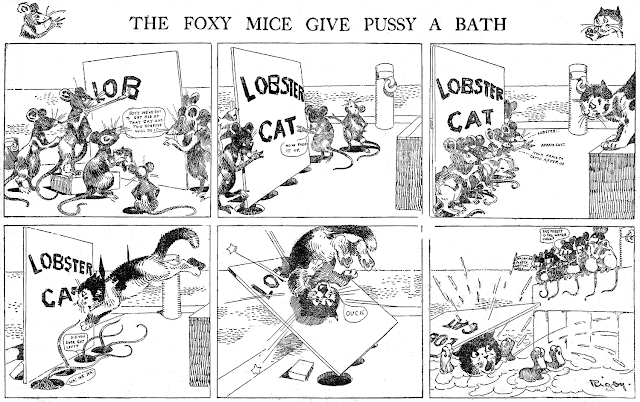 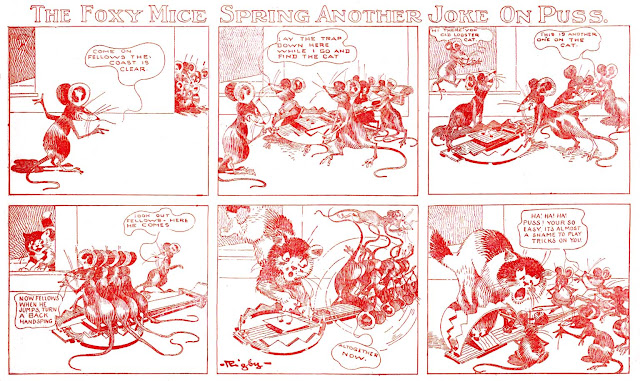 Clarence Rigby, who worked for quite a few syndicates in the 1900s, took a stopover at the McClure camp twice; once in 1901 where he was present at the inauguration of the new syndicated Sunday section, and then a second stint in 1903 to early 1904. In that second stint he produced Trials of a Little Mother and today's obscurity, The Foxy Mice.

Rigby shows a real gift for drawing cartoon animals in this strip, which sports some of the nicest art I've seen by him. Since Rigby took approximately 3.7 seconds to come up with the gags in this strip about mice taking revenge on their nemesis, I guess that left him lots of extra time to do an extra nice job on the art.

I am left with one question, though. Is a "lobster cat" a thing? It was used as a slur against the cat in both of these strips. Slang dictionary comes up dry, and a search for the term in 1900-1910 newspapers comes up with nary a hit. If Rigby made up his own bit of slanguage here, I wonder what he meant by it. That the cat had big claws?

The Foxy Mice ran in McClure sections from August 23 1903 to July 24 1904; the later ones were run well after Rigby had defected over to World Color Printing. Thanks to Cole Johnson for the sample scans.

Comments:
The ultimate slang authority is Jonathon Green, who gives (here): "lobster n.¹ ... 2.(a) [mid-19C+] (US) a slow-witted, awkward or gullible person; a general term of abuse; esp. of a socially inept or foolish person."

Sure- "Lobster" is very often seen as a popular epithet in circa 1900 comics and stories. It sort of faded awy fast, you don't see it anymore by the 1920s.

SLANG TERM "LOBSTER" IS AN ANCIENT ONE
According to the latest edition of Webster's dictionary, one meaning of "lobster" is "a gullible, awkward, bungling, or undesirable fellow." This meaning is supposed by most persons to be a modern development olf slang. However, "lobster*? was a favorite term of abuse among Englishmen of Queen Elizabeth's day. Some students think it c probably was applied first to men< with red faces. As signifying a soldier the term "lobster" is as old as Cromwell's day. Lord Clarendon, historian of the civil war in England, explains that it^was applied to the roundhead cuirassiers "because of the bright iron shells with which th/iy were covered." Afterwards British soldiers in their red uniforms were called "lobsters." Then came another development. The soldier in the red coat became a "boiled lobster," while the policeman" in blue was, of course, an "unboiled" or "raw lobster." Again, "to boil a lobster" was for a man to enlist in the army and put on a red coat.

The Term "Lobster " was common in the U.S. from about the last ten years of the 18th century to about 1930. I am familiar with its use in the so called "Coon" songs of that time span. I apologize for using that racist term,but I could not make myself clear without using it. A song titled "My C--- is a Lobster" was very popular at this time. Again,I apologize for the racist terms and attitudes. The use of the term "Lobster" in the same way in comics and music shows it must have been pretty common.