Obscurity of the Day: The Jollys' Bull Pup 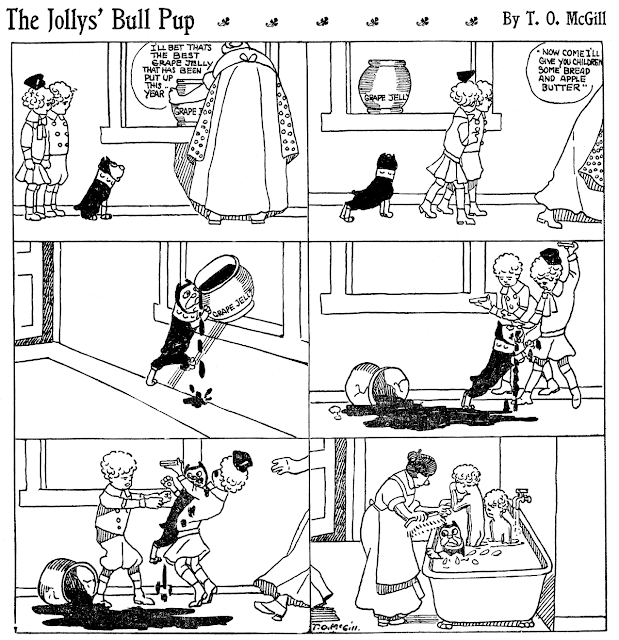 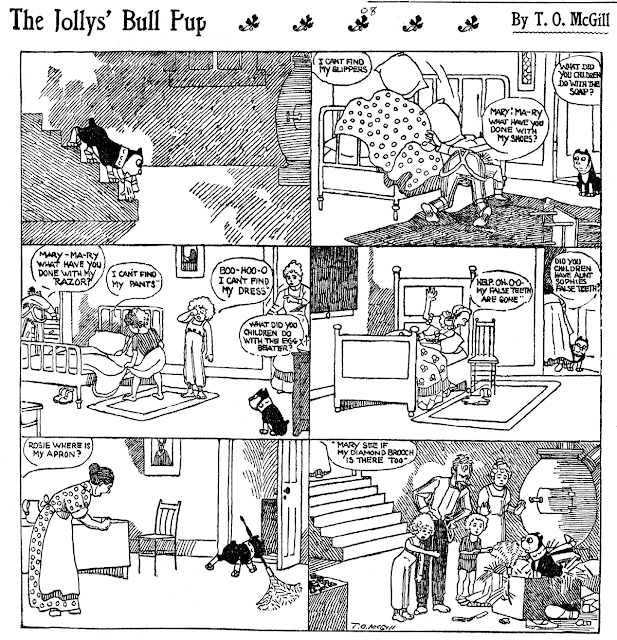 T. O. McGill is known to have worked for the New York Evening World at least 1903-1911, and perhaps much longer. The only bit of biographical data I've been able to find on him is that he was named as manager of their art department in 1908. Except for that one little mote of knowledge, all the evidence I can find for his existence are the comics he produced for the Evening World. He created eleven series in that nine year period, and the only one that ran more than a handful of times was The Jollys' Bull Pup. so he must have been primarily active in other art duties for the paper,  and comic strips were just an occasional sideline. Not to worry, though, as Alex Jay has turned up quite a bit of material on him, which we'll be acquainted with tomorrow.

McGill's style is a bit reminiscent of the Evening World's star cartoonist of the time, Maurice Ketten, and the fellow he in turn emulated, T. E. Powers over in the Hearst camp. McGill's artwork is spare, angular and uses a flattened perspective that harkens back to woodcuts. Anatomy is definitely not his strong suit. And yet, there's something about his very low-key work that really appeals to me. Maybe it is how this purely functional, unadorned art style so perfectly complements his gags, which are very dry indeed. Take the second example above; a different cartoonist would make each panel all about the slapstick of people looking for their lost items. While McGill gives a nod to that, the humor he prefers to catch is in the impassive face of the bull pup viewing his handiwork with neither joy nor malice. The pup can't even really draw the connection between what he did and what has resulted. He's simply found an interesting pastime in collecting items and bringing them to the basement, completely unaware that this will have any effect on the humans. The humor is quiet but feels very true ... or perhaps I read too much into the work. McGill certainly produced more than his fair share of dopey not-even-really-gags like the top example.

Comments:
Funny,Mad Magazine ran an article "When This Nudity Trend Hits the Comics" in the late 70s and here you found a comic that printed a bare backside way back in 1909/08.

For what it's worth, the 1910 U.S. census lists a Thomas O. McGill, newspaper artist, 41 years of age, born in Pennsylvania, married for 10 years to a woman named Elizabeth, father Canadian-born, mother Pennsylvania-born, and living at the Hotel Belleclaire at 2173 Broadway. The search itself turns up Thomas D. McGill.

His passport application on ancestry.com indicates he was born in Mifflin, Pennsylvania on or about February 4, 1869. As of 1913, he was apparently a "secretary." Elizabeth is listed as his wife's name. He intended to travel in (pre-Revolutionary) Russia, for a brief visit.

Ancestry also notes a Thomas Owen McGill, born February 4, 1869, died November 30, 1947, buried at the Crown Hill Cemetery in Wheat Ridge, Jefferson Co. [that's near Denver], Colorado. That suggests it might be profitable to check Denver newspapers around that date to see if there was an obituary.

Sorry -- might have pulled the trigger too soon, based on the curious coincidence of two Thomas McGills being born on February 4, 1869. The 1869-1947 guy was supposedly born in West Vail, and died in Indiana.

There's a T.O. McGill living in Silver Bow Township, Butte City, Silver Bow County, MT in the 1900 census. Occupation, journalist, married to Elizabeth, born February, 1869, so I think this is the same guy that's in the 1900 census. At this point, the couple was married ca. 1 year, suggesting an 1899 marriage.