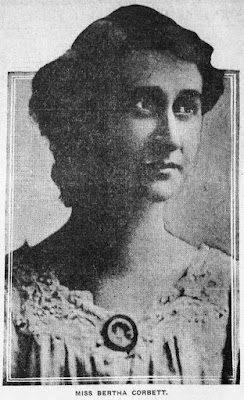 Bertha L. Corbett was born on February 8, 1872, in Denver, Colorado according to Woman’s Who’s Who of America (1914). Bertha’s father, Waldo, was listed in the Corbett, Hoye and Co.’s Annual City Directory City of Denver from 1876 to 1879. In the book History of Arkansas Valley Colorado 1881, Mr. Corbett was mentioned as a member of the Knights of Honor in Leadville, Colorado. Sometime later, the family moved to Minnesota.

In the 1895 Minnesota State Census, Bertha was the oldest of three siblings. Her mother’s name was the initials C.E. The family lived in Minneapolis.

The American Art Annual (1915) said Bertha studied with Douglas Volk at the Minneapolis School of Fine Arts, and Howard Pyle at Drexel Institute.

According to the 1900 United States Federal Census, the family lived in Minneapolis at 3404 Chicago Avenue. Her mother had died between the state and federal censuses; her father was a sign painter. 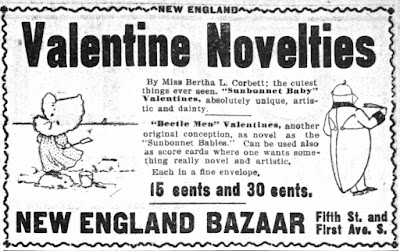 
...The Sunbonnet Babies really grew out of a group of children I saw playing in the sand. I drew a picture, the original Sunbonnet Baby, as it afterward proved. My fellow artists examined it critically and professed to like it. I fell quite in love with it myself and at once set to work to draw more….

…They came out in a book bearing their names in June 189[illegible] accompanied by little verses of explanation. Then the dainty maidens began to appear on blotters, valentines, Christmas cards and calendars, and now they are coming out in a primer, which Rand & McNally will publish soon.

A different account of her Sunbonnet Babies origin was given in the Kalamazoo Gazette-News (Michigan) on June 29, 1902.


…[Bertha] told of a visit to the theatre with a friend who, after watching her sketch this and that actor's face, remarked: “It is all in the face, isn’t it? There would be no expression or meaning in a picture if you left out the face?” Miss Corbett after a moment's thought sketched for her a little child tugging his wagon loaded with autumn leaves in which no face appeared and yet the picture told its story.

From that time the idea grew and the little sunbonnet people have grown and developed as healthy children will, until the oldest are 4 years of age.

Miss Corbett has collected a number of her earlier children late a little volume which has been published. She is now working on a Sunbonnet Baby Primer for Rand & McNally of Chicago, the text for which is being written by Miss Eulalie Grover….

A book which won the heart of all was the Sunbonnet Children with four leaved cloves over their shoulders, which Miss Corbett got out about Christmas time, four years ago…. 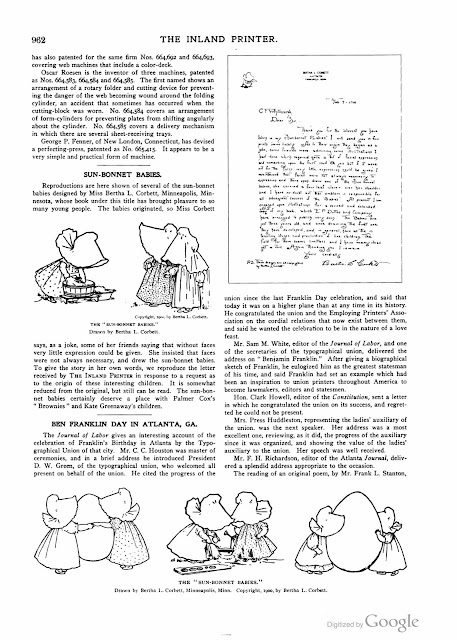 The Sunbonnet Babies’ Book was published in 1902.

Bertha’s Chicago studio was mentioned in the Minneapolis Journal on October 22, 1905.


Miss Corbett has an attractive studio in the Fine Arts building with some other young women in art crafts, but she uses the place now rather as business headquarters than as a workshop, for her work has taken an entirely new turn and now the babies and boys are being exhibited in chalk talks by their creator.

On September 20, 1906 the Minneapolis Journal reported her venture into advertising, “At present she is associated with R.F. Outcault of ‘Buster Brown’ fame, and together they evolve ideas which are to be set afloat in the advertising field.”

The Evening World (New York) published an ad, on May 31, 1907, touting the success of its Sunday art supplements.


The Sunbonnet Babies made a great hit when the Sunday World gave them as illustrations of a series of art lessons to New York City readers. It has now been decided to give the set to out-of-town readers.

Each picture in colors. Just the thing for framing or passepartouting. Get the set. Order from newsdealer in advance. The Lovers Next Sunday. [illustration of sunbonnet baby and overall boy kissing]

Perhaps the Evening World’s sunbonnet series prompted Corbett to develop her comic strip, The Sunbonnet Babies, which debuted in the Boston Globe on December 8, 1907. The series ended June 28, 1908.

The Los Angeles Herald, January 2, 1908, reported Bertha’s visit while on her way to Japan.

Bertha was counted twice in the 1910 census. She was a roomer in Chicago at 4541 Prairie Avenue; her occupation was artist at a studio. And she was counted as a member of her father’s household in Minneapolis at 203 14th Street.

The American Art Annuals of 1915 and 1917 said Bertha was a resident of Topanga, California.

Bertha was profiled and photographed in the May 1917 issue of Sunset. 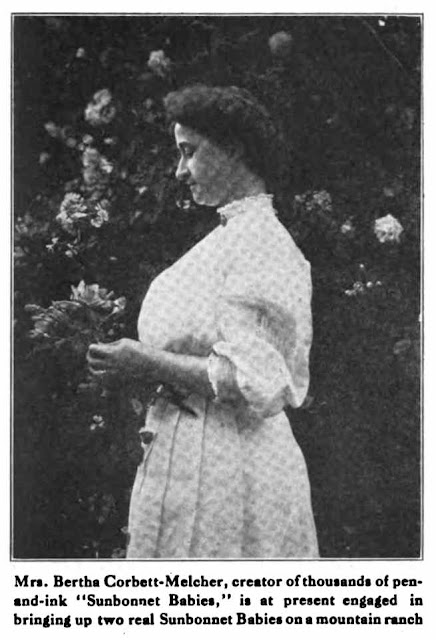 Musical Courier, August 26, 1920, announced Bertha and her husband were members of the Nordskog Studios faculty.

Social Progress, April 1922, published Bertha’s illustration for “How the Rabbit Got His Long Ears”.

In 1920 Bertha, her husband and two daughters lived in Calabasas, California. The husband and wife were artists at a studio. The family remained in Calabasas in the 1930 census; George was an artist and Bertha was an illustrator, both independent.

According to the 1940 census, Bertha was divorced and residing at 365 Norwich Drive in Beverly Hills, California, the home of her daughter, Ruth, who was married to C.J. and had two daughters.