Obscurity of the Day: Our Own Movies 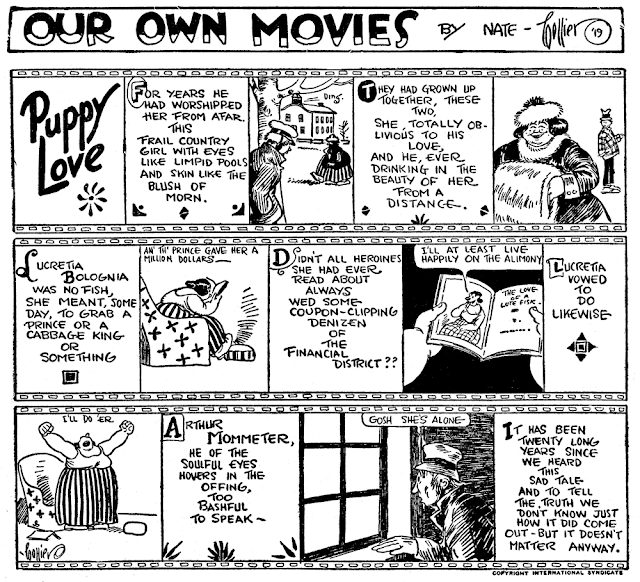 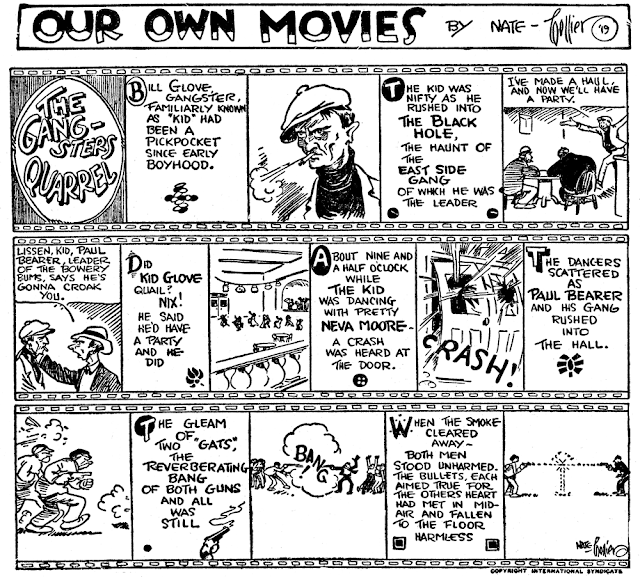 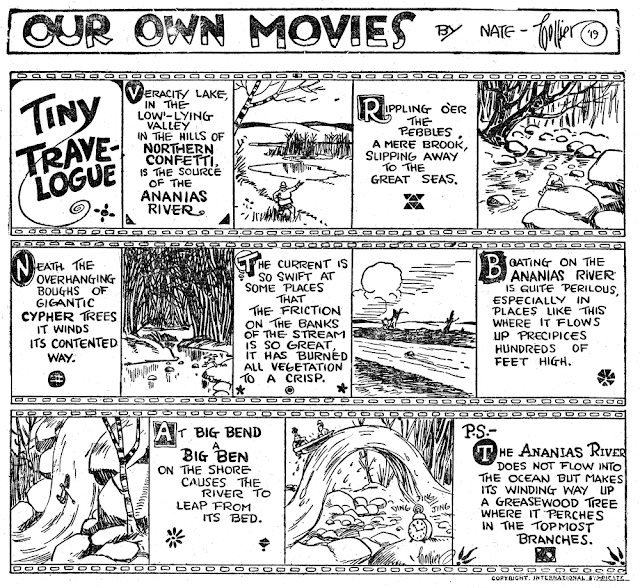 I'm ambivalent about posting today's obscurity, Our Own Movies, because I have a great affinity and respect for the work of Nate Collier. This series unfortunately affords me few opportunities for compliments.

Our Own Movies seems to have debuted on November 3 1919*, syndicated by Baltimore's International Syndicate. International was an important early syndicate twenty years earlier, but by 1919 they were just getting by with some second-rate material that they sold to smaller papers. Nate Collier was a perfect fit for them because he was always on the prowl for another outlet for his constantly drawing pen, and he wasn't precious about who signed his checks.

Collier was creative enough that he didn't need to resort to plagiarism, but for some reason he offered International a bald-faced copy of Ed Wheelan's Minute Movies**, less the most original aspect of Wheelan's creation, the recurring 'actor troupe'. For my own happiness, I'm going to assume that International ordered him to produce this me-too strip.

When first offered, the strip was designed so that it could run as a very thin page-width strip, like Bert Link's A Reel of Nonsense.  However, I have yet to find a paper that ran it that way. The strip was also offered formatted as a three-column three-tiered square (as seen above). This succeeded in making the captions sometimes refer to a drawing on a different tier, making the strips a bit confusing to readers. Nevertheless, this was the format everyone seemed to pick.

By early 1920, the strip was reformatted to fit in the standard six-column comic strip format of the day, and now looked exactly like Minute Movies by switching to its two-tiered format. By then Collier was beginning to offer continuities, also like you-know-who.

The strip was actually running in a goodly number of papers (by International Syndicate standards), when it disappeared on August 28 1920***, not even a full year into the run. My bet is that International stiffed Collier and he flew the coop, but that's just a guess. No harm done, though, since it was not doing Collier's resume any good to be producing copycat material for an over-the-hill syndicate.


* Source: Ottawa Journal
** Actually, it was still titled Midegt Movies in 1919. The Minute Movies moniker would not come until 1921.
*** Source: Salina Evening Journal

Comments:
Like you I have always enjoyed Nate Collier.
Unlike you I greatly enjoyed the Our Own Movies series, at least the samples you provided.
The art (of course), the script, the lettering - it all worked for me.
The love story with the enigmatic ending, the gangster "film" with all the slang, and the fairy tale about the Ananias River; all of them wonderful. And completely different.
If he kept up the variety on the done-in-one installments I would have hated the change to serial format.
Since "there is nothing new under the sun" Nate nicking someone else's device doesn't bother me.
Looking forward to Alex's profile of Collier (I hope).

This feature was seen in the Rome (NY) Sentinel until 8 September 1920. That was a Wednesday, so perhaps INS stuff was not precisely to appear on assigned dates. Would you call them a "boilerplate" syndicate?

Hi Mark -
Quite a few International clients ran stuff late and out of order, so in order to figure end dates I tend to limit myself to papers that ran them for a good long while on a consistent daily basis. Is that true of the Rome paper? Maybe you could give me the topics of the last few and I'll cross-check it with the Salina paper. Thanks, Allan

Hello Allan-
The final five strips in the Rome Sentinel;

23 August 1920: Part one of the saga of Rupert Spoofus and Elinore DeBumski and their rocky romance.

3 September: Two pith-helmeted guys stand surveying different landscapes in successive panels, including "Aloha Land", the Sahara and a glacier field, then resolving in the penultimate frame Nate himself shaking hands with "You", (a short chap in a derby) and finally, a smiling sun as readers are bid goodbye. Nate puts next to his signature "With a Fond Farewell."

8 September: "Jack Dannels" berates his maid, though we were led to believe he was an unhenpecked husband yelling at his wife. Next to Nate's signature he adds,"Watch For My Stuff in ""life" and "Judge."

The Rome Sentinel started running them on 22 March 1920.
So maybe they did run them out of order, certainly they mixed up the last two, and sometimes they skipped a day.