Obscurity of the Day: Those Girls 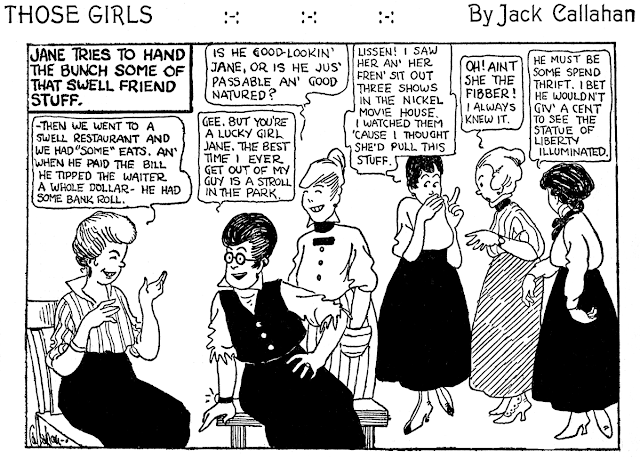 The mid-teens were the last waning days for what we here at Stripper's Guide term "weekday features". Weekday features are those that appear in daily format but don't appear six days per week. A weekday feature might manage up to 3, 4 or even 5 times per week, or it might show up just a few times per month, but it was the norm back when cartoonists were under a loose enough rein that they could flit around from feature to feature more or less as they felt the creative urge upon them.

Jack Callahan had a daily spot in the New York Evening World, and in 1916 he most often used that for his panel WhenYou Were a Boy. Every once in a while, though, he felt the urge to draw a bunch of catty gals, and he titled those panels Those Girls. The panel isn't at all memorable; I think they all had names, and they seemed to work at a department store, but that's about all I can say. Callahan didn't put much effort into Those Girls, but it is, I suppose, notable as one of the late examples of the "weekday feature."

Those Girls appeared in the Evening World from June 20 to September 20 1916.

Comments:
Hello Alan-
I notice there is no copyright line on this one, so would I see this in syndication, alternating with the When You Were A Boy panel, or was it only in the Evening World? Also, I'm guessing the crack wise about the statue of liberty indicates this episode is after 30 July, when the deadly Black Tom explosions shattered the lights in Lady Liberty's torch, among other devastations.

Had never heard of the Black Tom explosion. Very interesting! As far as I know, since both features constituted one daily, they both would have been made available to syndicate clients. I don't have access to the files right now, but I think this sample came from a client paper, not the NYEW. --Allan