Obscurity of the Day: Mr. Hankinson 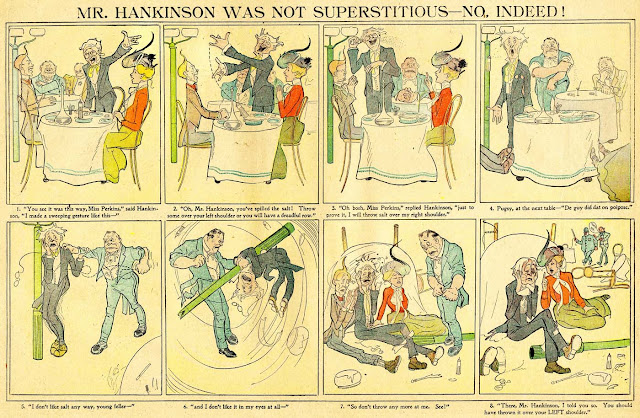 Here's an historic obscurity, Mister Hankinson by famed illustrator John R. Neill. Although Neill's career is the subject of quite a bit of scholarship, there seems to be no mention of this feature, which was his first newspaper comic strip.


* It could have also run on October 6 and/or October 20, as those sections may be incomplete on the microfilm that I indexed.

Comments:
I have the notes on the North American I made when I did a breakdown on it many years ago. As far as I can Tell, the sections for 6 & 20 October 1901 were complete, they have as much material as the weeks surrounding them. I notice that in those two weeks Neill is represented by one shots. But I have Mr.Hankinson as a two shot (and two other two-shot series) indexed under the name of Thomas Neill:

have I befouled by scholarship with erroneous misinformation?

Hi Mark --
Sorry for the slow response; I've been travelling.

I don't think I was intentionally omitting one-shots on that index, so I'm at a loss how we're not matching up. Might those Neill strips you're referring to have appeared outside the section? I could certainly have missed that.

That early in the NA's history, they had no extra cartoon pages for a magzine section like the Inky did, or anything like that. In fact I don't think they ever did. This is from the North American microfiles at the Philadelphia Free Library.
Here's my complete breakdowns for the dates in question:

6 October 1901
Why Bims Lost the Election by Walt McDougall
Reputations Made By Accident are as Good As any Other Kind by Tho. R. Neill
Unknown Perils of Carrying a Cane by Tho. R. Neill
untitled spot gag by Penfield
Shirkers Sometimes get Their Just Deserts by Tho. R. Neill

20 October 1901
Don't Be Too Familiar with Strange Babies by Walt McDougall
The Venerable Dr.Bear Vaccinates the Entire Zoo by "Sore Arms"
untitled spot art by McDougall
Kidnapping made Difficult by Maybell
The Up-To-Date Insurance Man by Jean Mohr

1 December 1901
How Schnitzer Recovered his Pretzel-with interest by McDougall
Sauntering Sam Discovers the Cause of His Insomnia and Works a Quick Cure by George Herriman
The Flipp Boys Try To Play Circus With Fatty Felix by McDougall
Muggsy Wants To Be Bad, But Fate is Against Him by Crane
Ye Strange Adventures of Ye Two Knights Of Ye Round Table (UNSIGNED, but my guess at the time was Neill)

8 December 1901
Santa Claus: "Hang These Newfangled Automatic Toys, Anyhow" by McDougall
A Stolen Ride With Santa Claus- Little Johnny's Terrible Dream by Haver
untitled spot art by Marcus A. Ide
Ye Strange Adventures Of Ye Two Knights of Ye Round Table (UNSIGNED, looks like Neill)
Muggsy Again Tries To Be Bad but Luck Is Against Him by Crane
Modest Old Santa Claus Gets A Shock (UNSIGNED, looks like Neill)

29 June 1902
The Village Of Romance, The Village Of The Real Estate Advertisement, and The Village as It Usually Is by McDougall
This Little Pig Went On a Rampage by Elliot
How Uncle Si Lost His Fourth Of July Dinner by Geo. Hopf
An Exciting Chase In Feline Town After The Puss That Stole The Bottle Of Milk by Tho. R. Neill
The Cruise Of the Good Airship "Skyrocket" by Kahles (Gets shot down with firecracker)
Why Mr. Bondclipper Tired of His New Panama Hat by Jean Mohr
Fatty Felix, The Flipp Boys And the Bees by McDougall
Sallie Slick And Her Suprising Aunt Amelia by Jean Mohr (An independence day firecracker spells out "Sallie")

6 July 1902
Uncle Hiram's Frantic Efforts to Escape The Automobile Fiend by McDougall
A Thrilling Rescue On The Briny Deep When Hope Had Fled by T.S. Allen
The Cruise Of the Good Airship "Skyrocket" by Kahles (Farmer traps him in barn with dogs)
The Beezlebub Boys and Their Uncle Tom by "Bow Wow"
Drowsy Dick In The Navy- His Heroic Action Saves the Admiral's Life by Chas. Reese
A Naughty Puss on Trial In Feline Town by Tho. R. Neill
Fatty Felix and the Flipp Boys in the Orchard by McDougall
Sallie Slick and her Suprising Aunt Amelia by Jean Mohr (She tricks Amelia from a window during Edward VII's coronation)

It occurs to me that as the name of the famous artist John R. Neill might be a little too close to "Tho. R. Neill", I may have misinterpreted a hard to read signature, and "Tho." could actually be "Jno."

I haven't a guess who "Sore Arms" and "Bow Wow" might have been.