Obscurity of the Day: Stuff and Nonsense 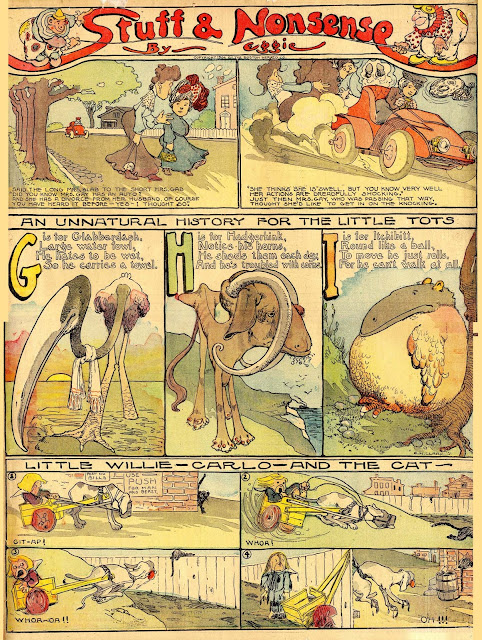 E. N. "Eggie" Clark only has two short-lived series to his name, but wow, they are real beauts. Here is his first series, titled Stuff and Nonsense, that was produced for the Boston Herald from March 6 to June 12 1904. Each episode had two recurring features, Little Willie and An Unnatural History for the Little Tots, plus some extras.

I know nothing about Mr. Clark, though one can probably safely assume that he was a Boston resident at this time. His later series was produced out of Pittsburgh, so he wasn't tied inextricably to the city.

Comments:
Certainly no Alex Jay, but...
Clark seems to have been quite a successful magazine illustrator and cover artist:

The Library of Congress has one cartoon by Egbert Norman Clark published in the Buffalo Courier-Express in 1918: https://www.loc.gov/pictures/collection/acd/item/2016679640/ (the tiff file is completely accessible for downloading). I also have:

Around 1930, he moved to Utica, New York. There, in the 1930s, he painted 11 murals depicting Mohawk Valley history. While the Utica Mutual Insurance Company, paid him to paint eight, the other three were created under the Public Works Art Project of the Works Progress Administration. He developed an interest in local history and published his own history magazine, The Upstate Monthly between 1940 and 1942. He died in Utica, New York, on November 16, 1942.