Obscurity of the Day: Dad in Kidland 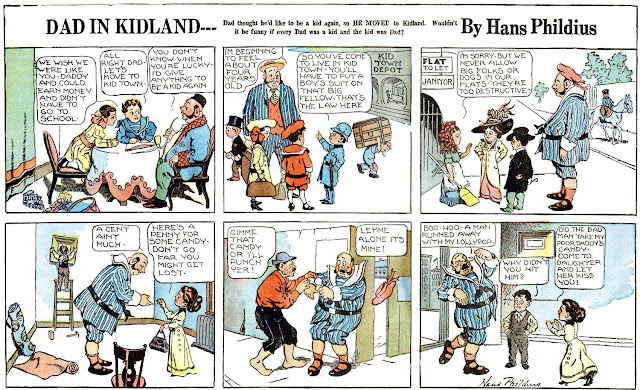 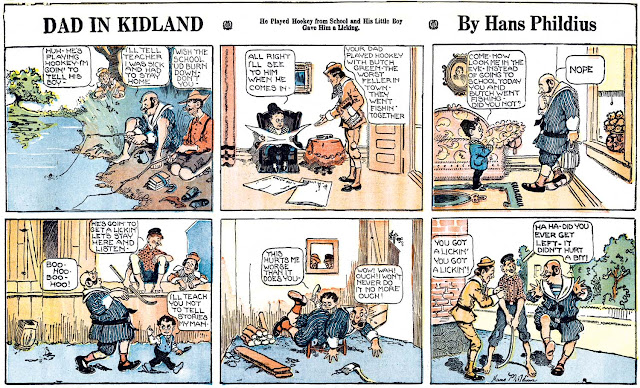 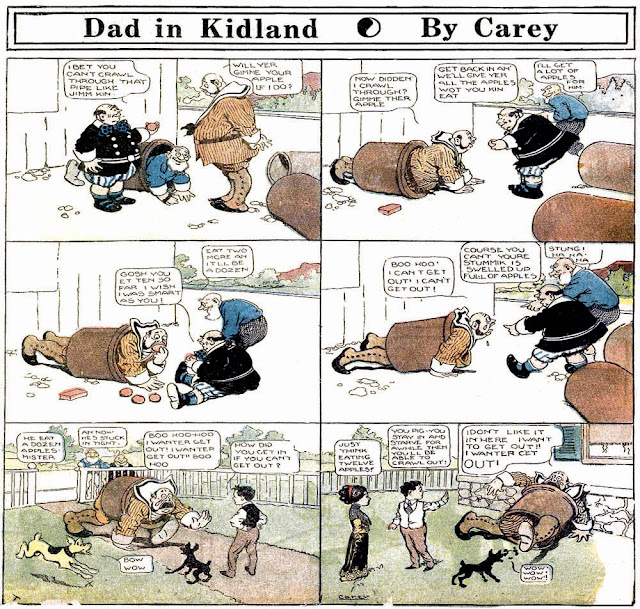 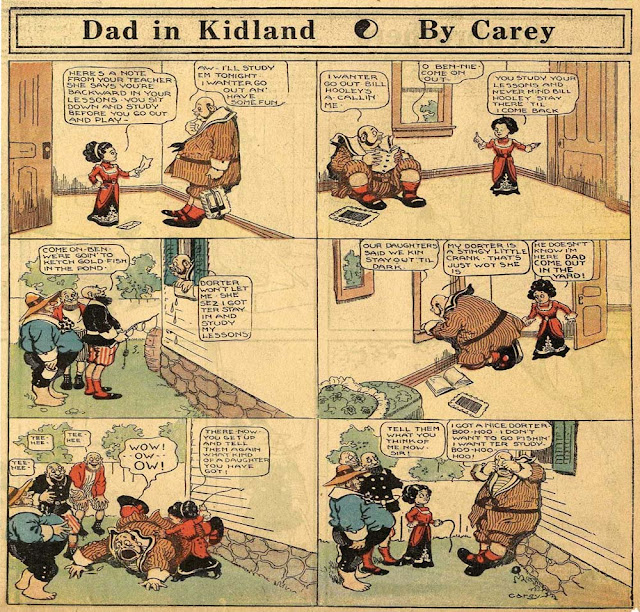 The idea behind Dad in Kidland is a good one: what if the roles were reversed between parents and children? In the first strip of the series (top image), Dad decides he'd enjoy being a kid again, and so the family moves to Kidland, where kids act like adults and adults vice versa.

This strip was no springboard to explore sociological and psychological issues between parent and child. The whole gag here is that an adult is dressed up in a Buster Brown outfit and acts like a bratty, rambunctious and mischievous kid, and his kids try to keep him in line. The whole strip is really just a visual gag, but it is a pretty good one. Father Ben's appearance and manner is so well handled that the strip is worth reading just for the fun of seeing a portly, mutton-chopped middle age man behaving like a kid.

Dad in Kidland debuted in the Sunday section of the New York World on May 7 1911*, and was initially credited to Hans Phildius. Mr. Phildius only signed the strip for the first five installments, and was then replaced by Ed Carey** (see bottom two samples).

It has long been my presumption that Phildius is a pseudonym for Carey, because the styles of the Phildius strips and those of Carey are pretty much indistinguishable, and Phildius has no other known art credits. Why would Carey adopt a pen name? My guess was that he was still in the employment of the New York Evening Telegram at the time, and as soon as his obligation to them was completed he was free to take credit.The only problem with that scenario is that your typical pen name is made up. While 'Hans Phildius' sounds to me like a made-up name, I just Googled it and actually found a single hit that indicated there was indeed a Hans Phildius living in New York in 1899. So did Mr. Phildius actually draw the first episodes of Dad in Kidland, or did Ed Carey choose his name to hide behind for some reason? That is a mystery I cannot solve. Alex Jay, on the other hand, can and did. See his Ink-Slinger Profile tomorrow.

Thanks to Cole Johnson for the bottom two sample scans. If you like Dad in Kidland, you'll find pretty much the whole run over on Barnacle Press to enjoy.

* Source: Ken Barker's New York World index in StripScene #14.
** Carey did not sign the strip until September 10, but the unsigned strips between Phildius and this are presumably Carey's work.
*** Source: Detroit Free Press.

Comments:
Hello Allan-
My take is that, though there might have been an actual man with that name, "Hans Phildius" would seem like a play on "Handful", part of a common or once common phrase describing overactive tots, "He/She's a handful".
I'm sure you've run across odd names of real people, and being a collector or such diverse civilizational debris from the past as post cards and magazines,I found the names on the addresses included Miss Anna Tiger, Mr. Odo Mounts, Ursula Hyde, Tillie Somebody, and Dewitt Daisey.