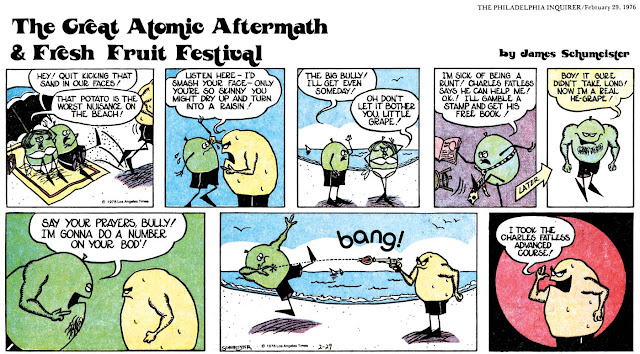 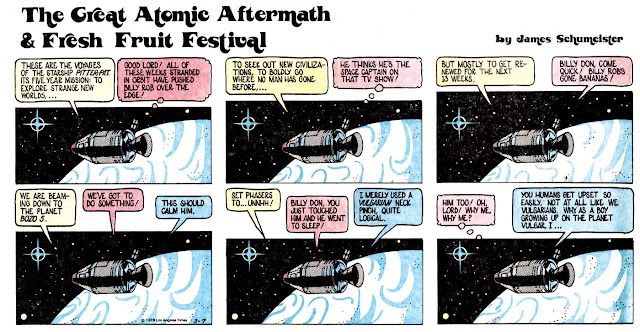 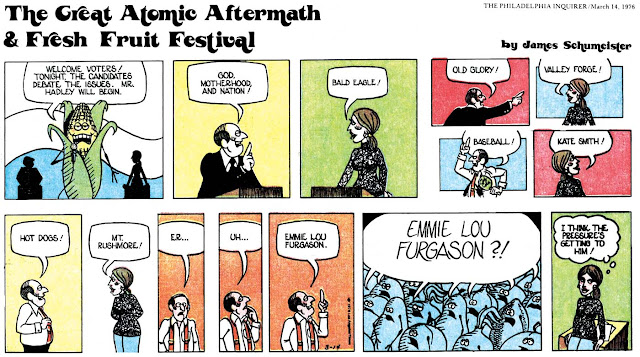 It might have sounded like the name of a bad jazz fusion group, but The Great Atomic Aftermath and Fresh Fruit Festival was actually a newspaper comic strip that debuted on January 5 1976*. The strip was penned by James Schumeister and was distributed by the LA Times Syndicate.

The odd title was actually a fairly spot-on indication of the strip's subject. Earth has just gone through World War III and the only survivor seems to be Fred, who climbs out of a bomb shelter. He's joined by another fellow and a woman, and they soon find that they are not alone at all but are entering a world now populated by atomic mutants in the form of giant talking fruits and vegetables. The cataclysmic setting and rather dopey inhabitants are used by Schumeister to comment on current society, and the humor was sharp enough to make for a fairly entertaining and even occasionally thought-provoking strip.

The daily strip apparently found enough clients that a Sunday was quickly added, apparently debuting on February 15 1976**. However, clients started jumping ship early on as the strip became weirder and the humor more conceptual and quirky. Schumeister was asking readers to follow him into more and more eccentric material before they'd even gotten a chance to get acquainted with the strip, and apparently they weren't ready to be led there.

The latest Sunday I've been able to find is May 7***, while the daily struggled on at least until July 24***. After barely more than a half year, though, the rebirth of the world came to an end. Schumeister would soon get another chance on the comics page with the strip Levy's Law, which was considerably more accessible material, and it would last six years.