Obscurity of the Day: Masterpieces of Great Literature 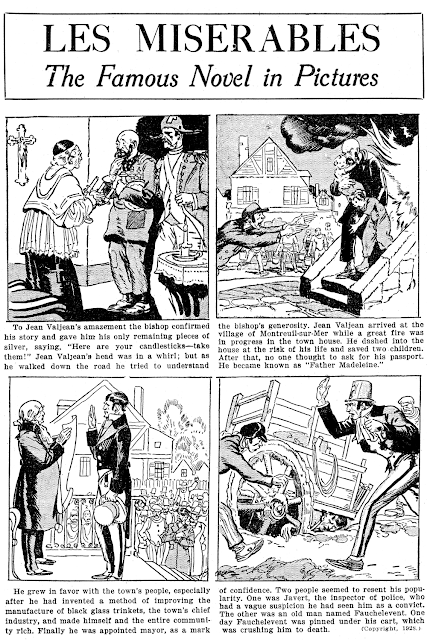 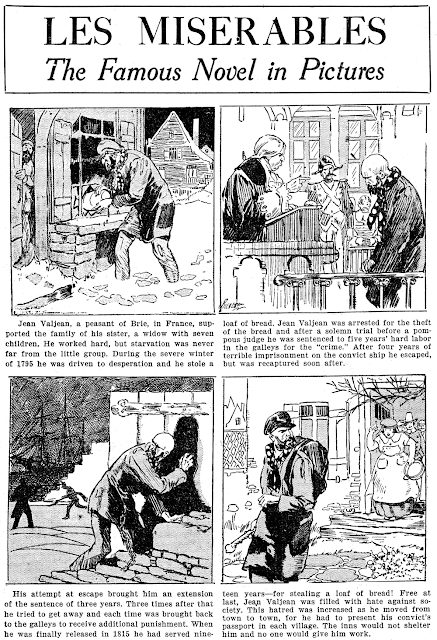 In 1927, King Features came out with a lot of short run daily strips with literary and biographical subjects. Although it is impossible to place them all into a single coherent series (and they don't seem to have been offered that way), one subset was definitely advertised and sold under the umbrella title of Masterpieces of Great Literature. In this series, all but one adaptation was summarized in the rather ridiculous space of a mere six daily strips.

I've managed to find a total of eight adaptations, which seem to have been run in whatever order the subscribing paper felt like. Both papers I've seen these in* ran the series from May to July 1927, but both skipped an adaptation or two, so it is impossible to assign definite start and end dates.

In the Toronto Star, W. Paul Pim was credited on the masthead throughout the series. I'm guessing that means he wrote the adaptations, but that is just a guess. He also signed the art on one adaptation, but given that Pim wasn't much of an artist, I find it hard to believe he really produced the sumptuous art for which he was taking credit.

Here are the adaptions and the artists who signed them:

* Toronto Star and Harrrisburg Evening News, plus an unknown paper that ran the strips at the rate of two per week in a Sunday edition

Comments:
Hello Allan-
You say this is a mid-1927 series, yet one of the two samples offered it has a 1928 copyright, and you say it's King Features, but if so, it's not apparent from the copyright line seen; "(Copyright 1928)."
The KFS and other minor Hearst syndicates like "Premier" would be more plainly marked. Would I miss my guess if my guess was that this was an independently owned project that might have been distributed by KFS?

Hi Mark --
In the 1927 Harrisburg paper run the copyright slug is to King Features. The samples I used above are from an unknown paper that ran them very late and in the weird setup of two strips in a magazine section each Sunday. Why that paper bothered to remove the old slugs and add a 1928 copyright line is one of those things you'd love to ask of an editor --- do you guys really have THAT much free time?

That's interesting they were in a Sunday Mag section. That, and considering these are such short "runs" per story,may suggest they were intended for whatever equivallant we had then for the "weekly service" package.
It would seem a rather pathetic answer to some of the then new trend of serious continuity strips.

That "unknown paper that ran the strips at the rate of two per week in a Sunday edition" was likely the Des Moines Register in 1928. But they ran an abridged version. For instance, in 1927, bith the Three Musketeers and Rip Van Winkle ran 6 days of 4 panels each, for a total of 24 panels. In the Register, it only ran 20 panels, 10 per week in 2 tiers. The text was complete, however. But they still carry a "King Features, 1927" copyright.