Max Wilford Newberry was born on July 13, 1868, in Rochester, Michigan, according to the Michigan, Births and Christenings Index at Ancestry.com. His father was Francis D. Newbury and a family tree said his mother was Fannie Ellsworth Stone. Newberry was baptized in Oakland, Michigan.

In the 1870 U.S. Federal Census, Max and his parents resided in Union, Michigan, where his father was a school teacher.

The 1880 census said Newberry was the oldest of four children. The family of six lived on Washington Street in Coldwater, Michigan.

Information about Newberry’s education and art training has not been found.

In the 1880s Newberry moved to Chicago, Illinois. The Daily Inter Ocean (Chicago, Illinois), March 20, 1890, published an article about the stockholders of the 1892 World’s Exposition and listed Newberry’s investment of twenty dollars.

The Chicago, Illinois, Voter Registration, at Ancestry.com, said Newberry was registered in 1892.

The 1896 California Voter Register, at Ancestry.com, said Newberry was in San Francisco, California. The Los Angeles Herald (California), April 24, 1896, noted the newspaper people, who registered at the press headquarters in the Hollenbeck hotel, including Newberry of the San Francisco Chronicle. The Los Angeles Herald reported Newberry and his wife stayed at the Hollenbeck in December 1896.


With the Herald’s special expedition to the Klondike gold region aboard and followed by the shouts and good wishes of five thousand persons, the steamer Excelsior sailed from San Francisco for St. Michael on July 28. She carried one hundred and ten passengers, among whom were Mr. John D. Gillivray, a mining expert employed by the Herald to personally investigate and write of the wealth of the Northwest, and Mr. Max Newberry, an artist and writer, also a member of the Herald’s special expedition. …


Below are some of Newberry’s drawings. 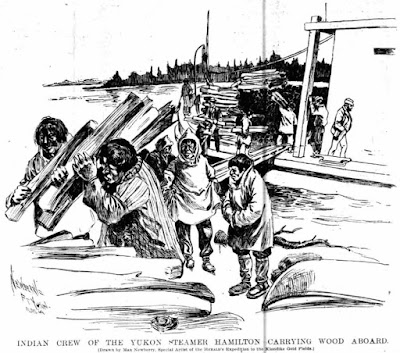 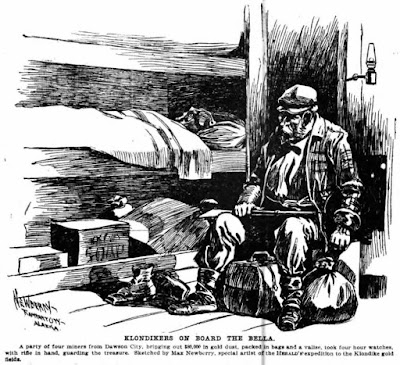 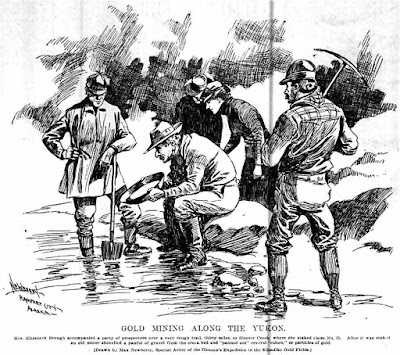 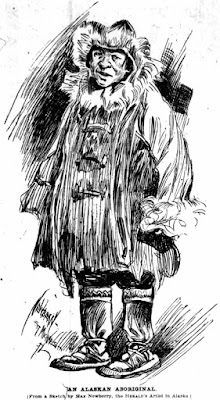 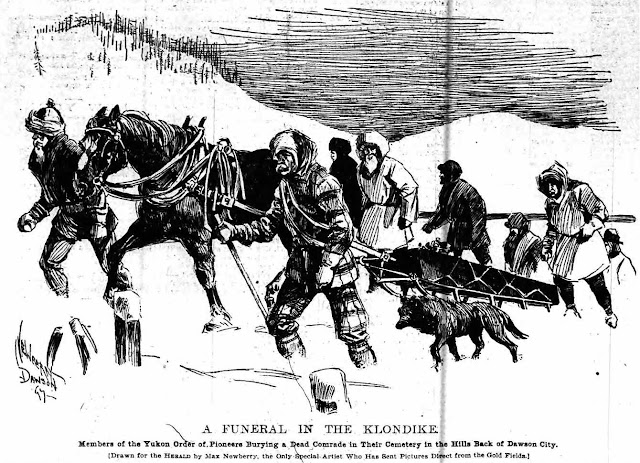 The New York Herald, January 6, 1898, explained how documents were sent to the newspaper.


From Klondike in a Can.
Despatches and Pictures for the Herald Come Through Safely.

The Herald to-day prints a picture of a tin can which came all the way from Dawson City over the pass to Juneau, and by registered mail to the Herald in New York. The can, which contained despatches, sketches and photographs, is about twelve inches long and two inches in diameter.

John D. McGillivray and Max Newberry, the Herald’s correspondent and artist respectively in the Klondike, adopted this means to protect their despatches and pictures from the snow and rain while on the way to Juneau. The can was made by a tinsmith in Dawson City, and the letters and sketches were put inside. Then the tinsmith soldered the can so tight that water could not get in.

The can was given to an Indian courier, or runner, who carried it over the trail to Juneau, six hundred miles distant.

The Herald’s correspondent in Juneau received the can from the courier and sent it by registered mail to the Herald.

The cut will show evidence of the rough treatment the can received on its way out. When the tin envelope was opened with a can opener in the Herald’s office its contents were found to be in as good condition as when they left Dawson City. 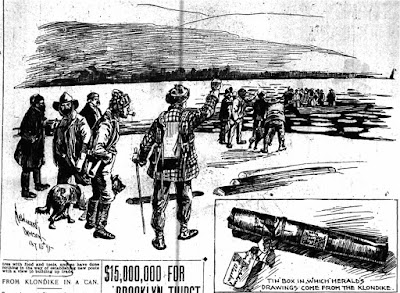 The Oregonian (Portland, Oregon), April 2, 1898, said “Max W. Newberry, the newspaper artist, who was sent to Dawson last fall by the New York Herald, has sold his claim, No. 97 above discovery, on Bonanza Creek, for $5000.”

Below are some of the San Francisco Chronicle drawings by Newberry from August and September 1898. 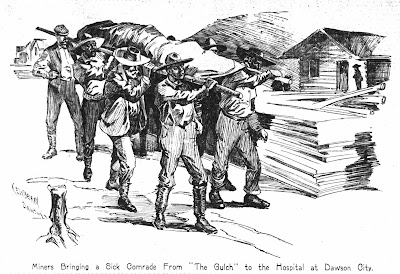 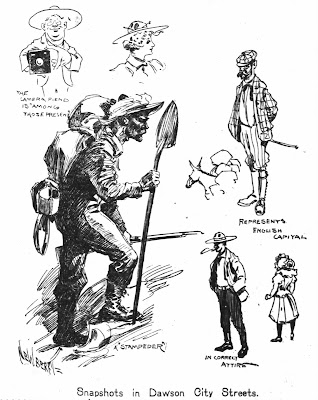 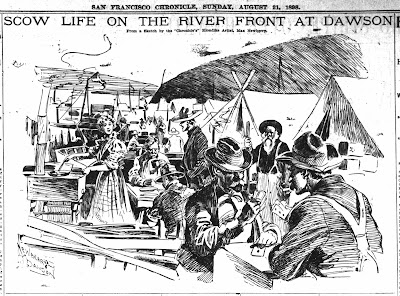 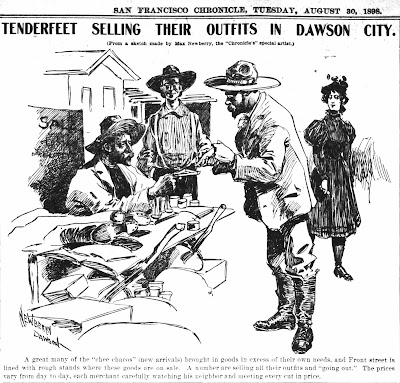 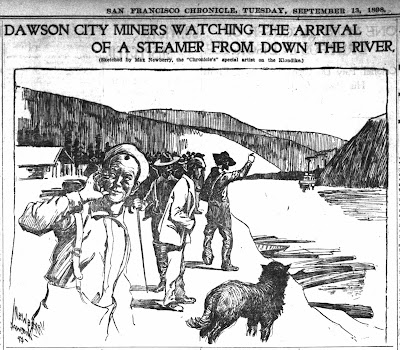 Who of The Journal readers has not noticed at the lower right hand corner of the handsomest illustrations that appear in the Examiner the familiar signature, “Newberry.” Max W. Newberry is the man who used the pencil that produced those pictures and the hand that held the pencil with all firmness trembled a trifle last evening when he went to the county clerk’s office in this city and signed the application for a marriage license.

Mr. Newberry is chief of the art department of that paper and rather than be joshed by the boys on the Examiner, all of whom are paid up subscribers of The Journal, he came to Reno to wed Elizabeth Hay Wiley, a fair San Franciscan. Mr. and Mrs. Newberry will spend today in this city and leave for San Francisco this evening, where the fly couple will be met at the ferry by Count dePeanut’s swine band.

Mr. Newberry was taken somewhat by surprise last night when a Journal representative asked him to make a drawing of himself and bride for publication this morning.


At some point Newberry moved to Boston, Massachusetts, where he headed up the art department of the Boston Herald. Boston city directories from 1908 to 1910 listed his address as “80 Summer boards at Scituate”.

The Newspaper Feature Service produced a long-running series of romantic cartoons, by several artists, beginning in 1913. Newberry contributed at least one drawing in 1915.

Chicago was Newberry’s home, at 4760 Lake Park Avenue, in the 1920 census. The whereabouts of his family is not known.

Newberry was living alone in 1930 census. The illustrator was lodging at 37 Madison Avenue in Manhattan, New York City.

Newberry found work in his childhood home town of Coldwater, Michigan. He was living with his brother, Roy, the managing editor Daily Reporter newspaper. Also in the household was their mother. Their names and address, 11 East Chicago, were found in Coldwater directories from 1932 to 1936.


Max W. Newberry, 69, for several years associated with Hearst newspapers as a commercial artist, died of a heart attack at his home here Friday night. Surviving him are his widow, Fay, a daughter, Mrs. Robert Foster, the former Barbara Newberry of the Ziegfield [sic] Follies, of London, England; his mother, Mrs. Fannie Newberry of Coldwater; a sister, Mrs. Grace Kitchel, one of the owners of the Coldwater Daily Reporter, and two brothers, Roy Newberry of Coldwater and Perry, of Carmel, Calif. Funeral services will be Tuesday.


Newberry was laid to rest at Oak Grove Cemetery.