We spent many posts earlier this year analyzing and indexing the multiple Sunday magazine cover series offered by the Hearst organization. That experience may have left you thinking that those folks at Hearst sure did have a strong streak of romance in their souls. After all, that was by far the most common theme of their magazine covers.

The more prosaic truth, though, is that those Hearst folks were all about making money. They discovered a truth about romantic illustrations that translated to dollar signs. Women of all ages love romance, so that translates to happy readers who feel they're being well-served. Men can appreciate romantic illustrations for the beautiful women who are the usual subjects, and that makes them happy, too. They don't see themselves as the intended target, but that doesn't mean they can't steal an appreciative glance. The only ones left out in the cold are little boys, and they're too busy reading the Sunday funnies to care.

Hearst's understanding of newspaper audiences didn't always necessarily translate into big sales. It isn't an easy task to convince a cigar-chomping features editor that there is value to constant doses of romance in the paper. But enough editors did bite, and found the material a good selling feature for their papers, to keep the syndicate pushing romantic illustrations out the door every Sunday in various guises for years.

Today we're going to begin a series on another romance option offered by Hearst. If editors found that Sunday romance helped  to sell papers, why ignore the rest of the week? Much like the multiple parallel Sunday magazine series Hearst offered, they also sold several different flavors of weekday romance content.

Hearst directed Moses Koenigsberg to create the Newspaper Feature Service syndicate in 1913, and one of their earliest features seems to have been a daily magazine page (as it was often titled on mastheads). Typical contents were homemaking and fashion columns, a story for the kiddies, and on some days, a large cartoon with romantic theme.

I've known about this feature for many moons, but it always resisted my urge to properly index. The cartoons often seemed to appear on semi-random days, and I was never sure if I was seeing the complete output of the syndicate. Many papers did not run the full page of material, or rejiggered it to add advertisements. What point is there to indexing the material if I might be missing significant parts of it?

I long assumed that the romantic cartoon was a feature unto itself, and so I believed that if a newspaper didn't print it consistently a certain number of times per week then I had to be missing something. My recent hiatus from the blog gave me the headroom I wanted to explore that problem, and that's when I finally realized that the feature NFS was selling was a daily magazine page, not a romantic cartoon. The cartoon was merely one optional element of an entire page.

That was a bittersweet discovery, because although it meant I didn't have to expect a consistent publication schedule for cartoons, it also meant that if I couldn't find a newspaper that consistently ran the full page every day I'd never know if the cartoon index was complete. It turned out that for a good percentage of the life of that page I indeed could not pin down a newspaper that printed the page on a consistent basis and with no cuts. I also discovered that since the magazine page consisted of evergreen material, newspapers often ran it late, evidenced by seeing the same cartoons running on divergent dates in various papers.

I decided to soldier on, however, keeping in mind that an imperfect index to this very interesting series is better than no index at all. What's interesting about it to me is that while there were a number of artists who put in years of consistent production on these cartoons, many others would pop up for a short stretch here and there, and the complete roster of cartoonists/illustrators is very long and eclectic.

I plan in coming posts to display at least one sample for each artist who worked on the feature. Because my files of this material are so spotty, I'll be pulling the lion's share of the samples from online newspaper sources. I know that's not ideal, but we beggars can't be choosers. 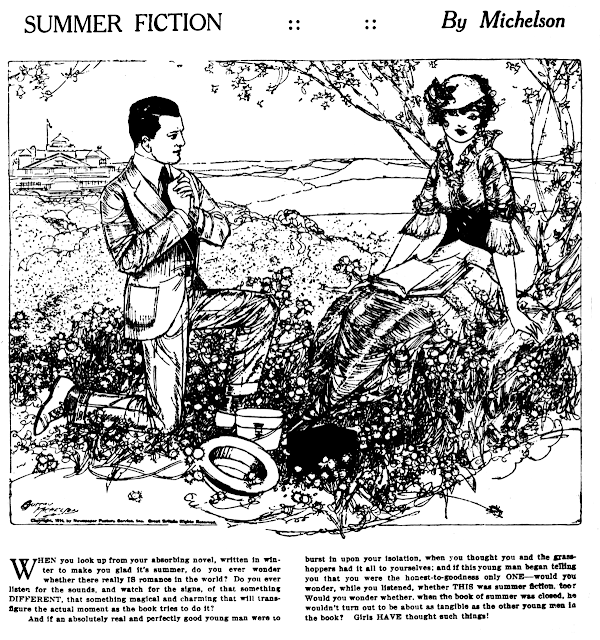 No newspaper available online that I know of offers a better start date than the one I found many years ago in the microfilm of the Philadelphia Evening Telegraph. Back then I wasn't nearly as clued in to the subtleties of this series, but I did index it during its 2+ year run there. Unfortunately, all but a small portion of that index has since been lost and all I have are the start and end dates for the artists of those early years. Therefore I can say that the feature there began on December 8 1913, and ran quite consistently three times per week on the magazine page (see below for the two months of Telegraph index that I can still find).

The series began and ran for the first seven months with only one contributing artist,  Gustav Michelson (GM in the calendar index below). While droves of female artists copied the wispy, frilly style made  famous by Nell Brinkley, it is unusual to find a male artist who did so. Michelson was one such anomaly. His cartoons also followed the Brinkley method in that he would write a paragraph or two about romance to go with them. We'll see this approach over and over from other artist contributors in coming posts. Whether the artists themselves actually penned these paragraphs seems doubtful, though. My guess is that they were contracted to illustrate paragraphs written by someone else, but that person was never credited.However, my money would be on NFS staffer Winifred Black, who seemed to specialize in matters of romance elsewhere on the daily magazine page.


Back to the matter of sources: online I found that the Indianapolis Star, which didn't run the series for long, did run it on the same regular basis as the Telegraph in February and March, except they were already sputtering out by the end of the second month. I was able to go back to the old Telegraph index for April, where we continue the regular appearances. That's it for the Telegraph unfortunately. Searching once again for a good online source, I found that the Muncie Star runs the panel VERY frequently in May and June, on one occasion five times in a single week! They sputter out at the end of June, though, so I have to resort to the Baltimore Sun for July, which only ran the panel once or twice a week. Maybe Michelson was enjoying a summer vacation, or maybe the Sun elected not to use all the supplied cartoons.

Starting in August, the Washington Times offers me the best indexing for the rest of the year. They are the first paper to use all or most of the daily magazine page, even including a masthead. As you can see by the index, though, the regular number and days of the week that once prevailed for the romance cartoon are no more; is the Times running the feature as received and complete? Unknown. Is the syndicate editor of the magazine page now using the romantic cartoons with no schedule at all?  It appears that the cartoons run when there is space, and that's about the full extent of the schedule, or lack thereof.


August also signals an important first when Annette Bradshaw makes her appearance (her start date from the Telegraph is August 25). Throughout Bradshaw's many years on the feature she would do double duty as both cartoonist and fashion illustrator. After her first few cartoons, Bradshaw decided to run them under a consistent name, Feminine Foibles (which would change to Feminisms in later years). She was the first artist in the long history of the feature to be allowed such a personal touch, and the only other artist was Marie Marot, who continued Feminisms on Bradshaw's departure.

Bradshaw was also unusual in that she did straight gag cartoons, old-fashioned 'he said - she said' types mostly. Most other artists did those lovey-dovey captions and paragraphs that put the accent on romance as opposed to humor. 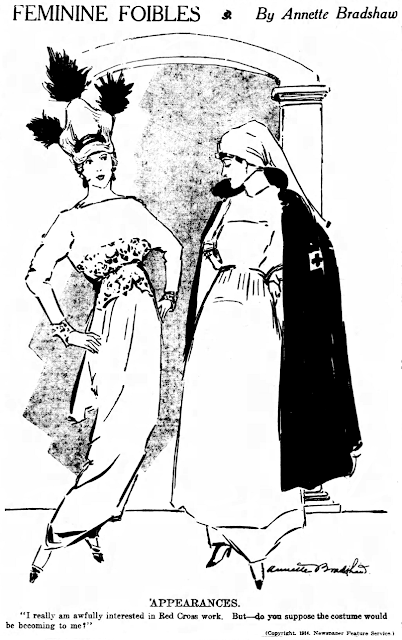 In the index below I indicate Bradshaw as AB until she starts working under the Feminine Foibles title, when I switch to FF.