Obscurity of the Day: Karl and Fritz 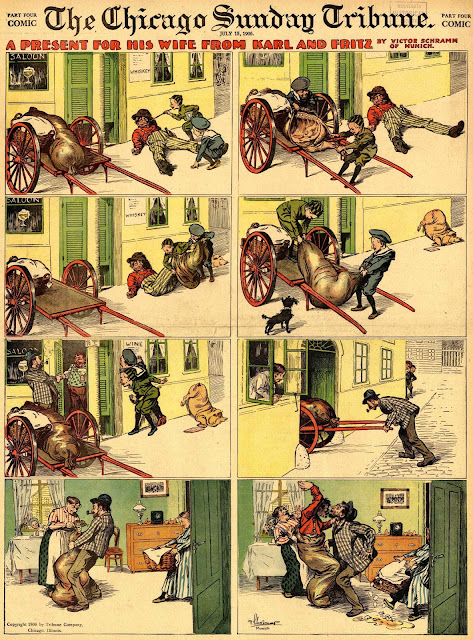 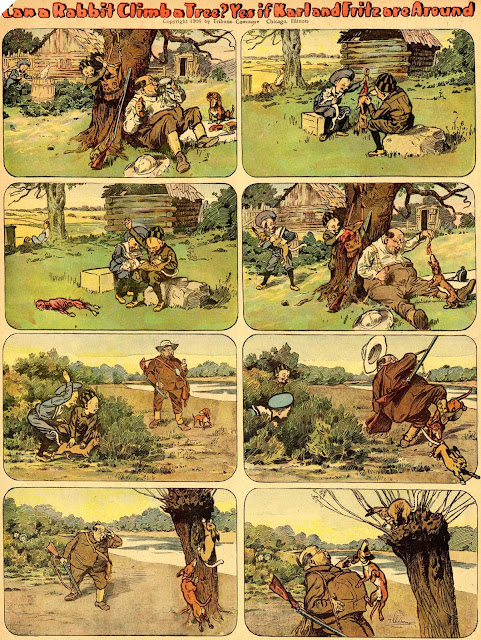 The Chicago Tribune went for German cartoonists in a big way in 1906-07, and my impression is that some of them were brought over to Chicago while others submitted material from their homeland. My guess is that Victor Schramm is one of the latter type, especially since he consistently adds 'Munich' after his signature.

Schramm created only one series for the Tribune, but what a memorable one it was. Karl and Fritz is about yet another pair of rotten kids who play pranks --- okay, so that part is a real yawn -- but wow are these some memorably stomach-turning pranks.

I've only seen a handful of strips, but each one outdoes the last for pushing the envelope of good taste. I'll not say more than that, but leave it to you to discover the depravities of Schramm's weird mind. After you've checked these out, head on over to Barnacle Press for more.

As usual with these Germans in the Tribune, determining the full runs of their strips is made harder because in most Tribune microfilm the Feininger pages are missing, and the other Germans are often inhabiting the other side. With the help of Cole Johnson, who had a pretty good collection of miraculously unpilfered sections, it seems as if Karl and Fritz ran June 3 to December 2 1906. Cole also supplied the sample scans.

Comments:
?? Did people buy whole sides of beef back then?

Hello Allan-
Cole had indeed, a rare run of untouched Chi' Trib, you'll note that they came from a bound run (which I disembounded myself) from the Minnesota Historical Society, which you'll also note is rubber stamped on the cover of the first example. They really loved stamping that on the cover of every last section of every edition, daily and Sunday.
I don't know as the Germans came over to do the Trib stuff, I was of the belief that Schram, Horina,Fieninger, et al. were churning them out back in Der Faderland at the same time they were all working at one of the German cartoon mags. I think it was either Simplicissimus or Kladderadich. Can't recall. Cole would've- he had a pile of them right into the end of the end of WWII, when they weren't so funny any more. Teutonic humor then or back in 1906, is an acquired taste.

Sure, you could buy a side of Beef then; you can finish off one at a single sitting, if you're hungry enough- and provided you're eighteen feet tall.


Why those little bastards! Sewing a drunken man up in a side of beef is one thing, but sewing a poor Cat up in a rabbit skin, ach! Enough iss too much!

Horina, for one, definitely came to the US for the Tribune. See Alex Jay's Ink-Slinger Profile: