Obscurity of the Day: Obliging Oliver 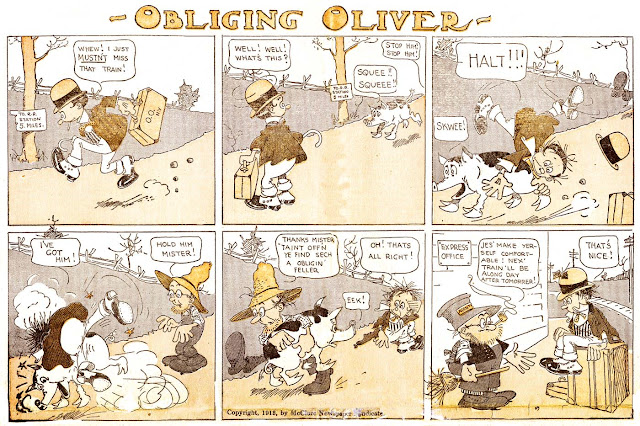 Pat Sullivan would in 1919 hit the jackpot as creator of the animated cartoon phenomenon Felix the Cat, but the Australian would start off his US career in newspaper comics. After a promising but short stint in heady company at the New York World, he was demoted to working for the McClure Syndicate. There his job seems to have been to either assist or perhaps just learn to copy the work of William F. Marriner, who was undependable because of his battle with demon alcohol. In Obliging Oliver, Sullivan was obviously training himself to ape Marriner's style. The strip began on May 11 1913 with rather crude artwork, but as the series goes on the Marriner influence takes over until by the end date of April 5 1914 you can't tell Sullivan's work from that of Marriner.

That was a good thing, because it was in 1914 that Marriner died, and it seems to have been Pat Sullivan who was assigned the task of continuing the one quasi-hit McClure had left, Sambo and his Funny Noises, with Sullivan now so adept at the Marriner style that one would be hard pressed to say when the actual switch takes place.