Ray Burns was born Raymond Howard Bernstein on April 21, 1924, in the Bronx, New York City, according to the New York, New York, Birth Index at Ancestry.com. His middle name was recorded on his Social Security application which said his surname was changed from Bernstein to Burns in April 1941.

Burns’ parents were Mortimer Bernstein and Harriet Baum, who married on January 7, 1923 in the Bronx. The 1925 New York state census recorded the trio in the Bronx at 54 Evelyn Place. Burns’ father was a jewelry salesman. At some point they moved.

In the 1930 U.S. Federal Census, Burns, his parents and brother, Mortimer Jr., were residents of Stamford, Connecticut, at 44 Culloden Road. Burns’ father was general manager of a jewelry store.

The 1940 census listed the family in Stamford at 19 Merell Avenue. 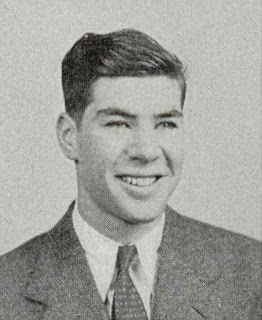 On June 30, 1942 Burns signed his World War II draft card. He lived with his parents at 31 Pellom Place in Stamford, where he was employed at the Electric Specialty Company. His description was five feet eight inches, 150 pounds, with blue eyes and brown hair.

The Wilton Bulletin (Connecticut), November 11, 1970, profiled Burns who talked about his art training and war service.


“I had no training per se except a few life classes and lectures. Because of my early interest in comic strips I wanted to be a cartoonist,” he said. “In 1942 I was out of high school but any future was obscured by the war. A trade school in Stamford and a crash night course to help get into defense work so I worked with lathes and grinders and in the summer in a machine shop and I hated it. I decided to hell with it and joined the Navy.”


He served on a destroyer in the Mediterranean and the Pacific as a second class signalman.


“… I was in on the invasion of North Africa and the Anzio thing and I was in France for quite a time. When I got out I wanted to go to art school and applied to Pratt but I didn’t go. I worked at home practicing drawing and comic strips. Alex Raymond who did the Flash Cordon and Rip Kirby strips lived in Stamford and I went to see him with some of my things. He was one of the most beautiful people I’ve ever known He advised me and really helped me.”

The Stamford Advocate, December 21, 1949, published a profile of Alex Raymond and said


… The entire strip is drawn by Raymond, and after he has roughed in the balloons containing dialogue and made the decisions on setting, an assistant, Ray Burns, a Stamford man, handles the lettering and background sketching. Raymond considers Burns to be one of the best lettering men in the comic business.


Burns was called to serve in the Korean War. The Department of Veterans Affairs said Burns served from December 4, 1950 to March 17, 1952. Burns went back to Raymond and resumed work on Rip Kirby. During this time Burns also met Frank Beck and Gus Edson and did work for them. American Newspaper Comics said Rip Kirby began March 4, 1946. Raymond died in a car crash in 1956 and his last strip appeared September 29, 1956. John Prentice took over the strip.

Stamford city directories from 1949 to 1956 listed Burns as an artist. His address was 31 Pellom Place then, in 1955, it was off Davenport Ridge Road. In the March 31, 1982, Wilton Bulletin column, “Twenty Five Years Ago” for March 27,1957, it said “Raymond H. Burns, an illustrator, and his wife, a dramtic [sic] soprano, and their two sons moved from Stamford to a house on Warncke Road.”

Burns returned to comics in the 1990s when he helped his friend, Jack Berrill, on his strip, Gil Thorp. The Wilton Bulletin said “When Mr. Berrill’s health began to fail in the early 1990’s, Mr. Burns helped draw the strip for two years. After Mr. Berrill died in 1996, Mr. Burns continued the comic, working with writer Jerry Jenkins to prolong the strip, which began in 1958.” American Newspaper Comics said Burns’ last Gil Thorp strip appeared January 6, 2001. The series continued with other artists and writers.


“Jack was constantly on the lookout for ideas to use,” said longtime friend Orlando Busino, a Ridgefield resident who has done the lettering in Gil Thorp for the past eight years. “He was always interested in the personal problems of high school students. He came up with a lot of topics from talking to his wife, Veronica (a teacher at Brookfield High School).”

“It (Gil Thorp) has quite a cult following, said Ray Burns of Wilton, who has done the drawing for the last year. “There are a lot of fans out there.”

Burns, Busino and two other Ridgefielders—Ed Plaut and Jerry Marcus—are among a group of local writers and cartoonists who regularly have lunch together on Thursdays at Nick’s Restaurant in Danbury. Berrill was one of the organizers of the weekly lunch, which has been taking place for more than 25 years. At last week’s gathering, the group toasted Berrill and kept a chair open for him.

“I can’t think of any man who would be more missed by his friends and family,” said Plaut “That tells you what kind of a person he was.”

“At our Thursday afternoon luncheons it was always Jack who held our attention,” said Marcus, the creator of the comic strip Trudy. “He was soft spoken, and when he spoke.


Burns passed away on November 23, 2000, in Norwalk, Connecticut. He was survived by his wife, Doris, daughter, Jane, and sons, John and David. He was laid to rest at the Fairfield Memorial Park in Stamford.

(Burns should not be confused with the Raye Burns School of Cartooning which was formed around 1930.)

Comments:
A bit of synchronicity. Mae Von Egidy (neé Mary Boyd) recently passed away and her obituary claimed she too was an assistant to Alex Raymond.
"She was a talented artist and worked for Alex Raymond in her younger years painting backgrounds for the Rip Kirby and Flash Gordon comic strips."
http://www.dailycartoonist.com/index.php/2020/05/07/mary-von-egidy-rip/
No dates, but she was certainly the right age and in the right area to assist Raymond. Maybe her help on Rip Kirby ended when Burns came around? Or maybe she was recalled when Burns went to Korea?