Obscurity of the Day: Farmer Judkins 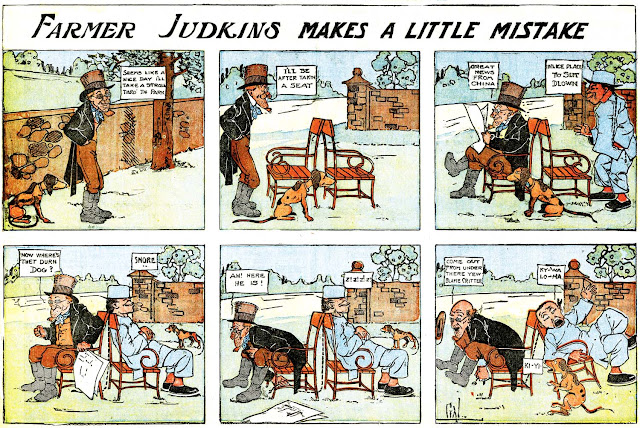 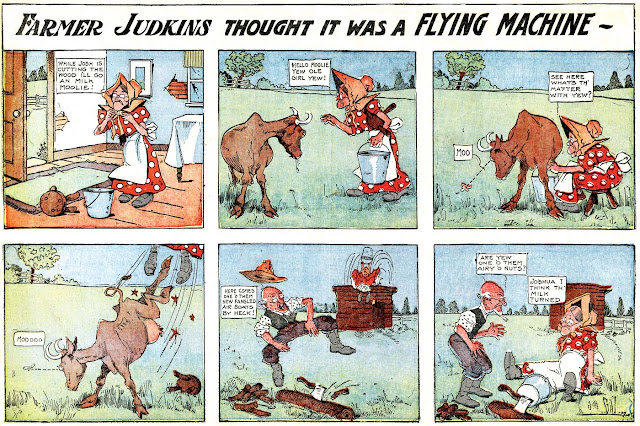 Jack "GAL" Gallagher came up with lots of series for the Philadelphia Inquirer in the 1900s, then later specialized in taking over strips for cartoonists who parted ways with the newspaper.

Here is a series from the first part of his career, Farmer Judkins. It's your typical hayseed farmer strip, though as usual for GAL he was cribbing gags from any and all sources, so you have strips like the top one that really don't have any real connection to the character. GAL wasn't the greatest cartoonist ever, but he did have a flair for portraying physical humor; he does a great job getting everything he can out of the weak gags in the strips above.

Farmer Judkins appeared in the Philadelphia Inquirer Sunday sections from May 5 to December 22 1907, but it was one of those strips that ran longer in their syndicated section -- latest I've found outside the Inquirer is May 24 1908, in the St. Louis Globe-Democrat.

Comments:
I think a problem with the Inquirer was that somewhere along mid decade,(1900's) they offered an extra page of comics, that didn't appear in the Inky itself, and might appear on the back of the Mag section in client papers. They weren't exclusive extra page series either. When Cole was recording the sections in the Globe-Democrat, he'd find odd extra installments of series like Big Scalper or Percy Vere.
The big disappointment was that the micro files of the G-D didn't bother recording these worthless comic pages most of the time, and the little edge visable from whatever page preceeded them, proved this was intentional. About 1915, the entire comic section is passed over too.

Farmer Judkins is a pretty lousy strip, all right. In fact, I can't even follow or figure out the supposed joke in the top one (about the park). I cannot tell what the people are doing, or why. I can even less understand, if that's possible, what the dog is doing, or where it moves to and what it's problem is in the last panel. No cartoonist wants to be called incomprehensible (I believe). I think Gallagher's problem may have been is that he didn't know whether or not he was incomprehensible, and didn't care. The second strip was maybe 1% more coherent. What a couple of loser strips.

Hi Katherine -- the joke, and I'm sure you'll be rolling on the floor once you see it, is that Judkins mistakes the Asian gent's long thin braid for the leash of the dog and yanks on him pretty badly. Har-di-har-har.

I knew that braid had a name, but had to Google it. It was called a queue or cue.

"Gal" was a lousy cartoonist, but was a real workhorse for the Inquirer.