Obscurity of the Day: Rowdy Dow at Killjoy College 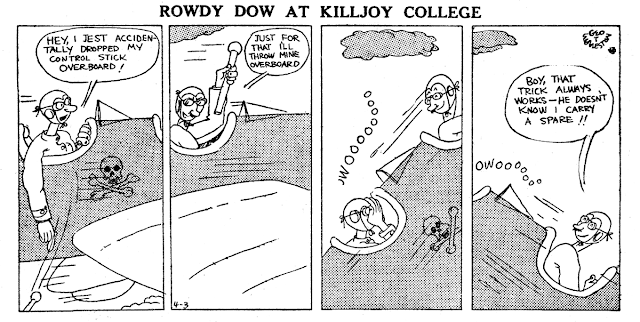 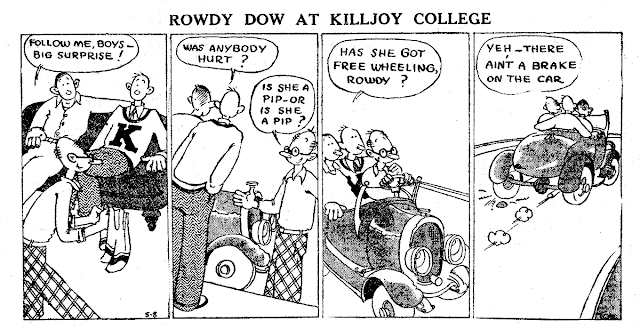 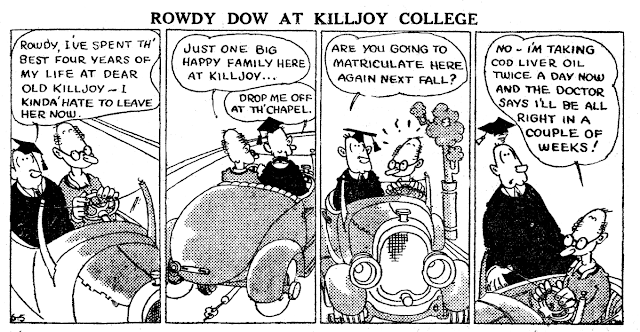 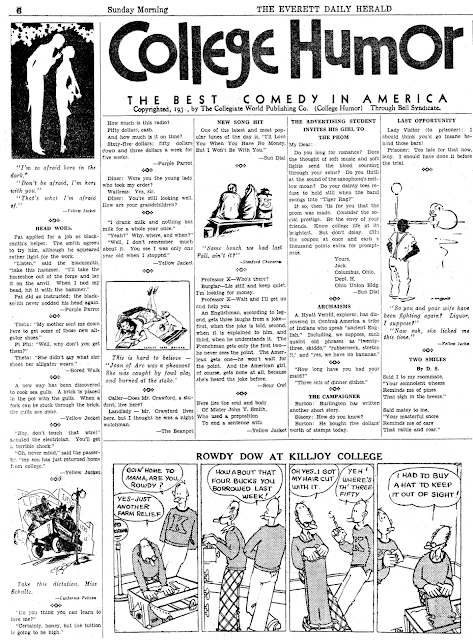 There was a time when just about any college worth its salt had both a newspaper and a humor magazine. The most famous of the humor mags is probably the Harvard Lampoon, which began in 1876, but the form has continued well into modern times. Some are still around and even thriving, though mostly as digital versions, like The Onion out of the University of Wisconsin.

Back in 1920, some smart cookie realized that there might be good money in a newsstand magazine that collected the best material from these magazines together. That entrepreneurial publisher, whose name I cannot seem to find, started Collegiate World, which was soon renamed College Humor. The magazine sold well, especially once they started supplementing the reprints with some more professional level material, including a big dollop of lecherous stuff about college coeds.

Around 1929 College Humor partnered with Bell Syndicate to create a weekly newspaper half-page of gags and cartoons culled from the magazine's archives. The feature sold respectably well, despite being a half-page of what I would call pretty weak material, mostly painfully bad gags.

In 1931, the feature's editor decided that a comic strip about college life would be just the thing to brighten up the half-page. Thus was born Rowdy Dow at Killjoy College, which debuted on January 4 1931, and was initially drawn by George T. Eggleston. Eggleston would go on to magazine cartooning, and then the editorship of several prominent magazines. Alex Jay, who will profile him tomorrow, says he was also serving in an editorial capacity at College Humor, so it is a good bet that these strips were also being run in the magazine, though I haven't seen them.

Eggleston could draw well enough, but his gags for this feature were certainly no classics. After about 15 months he gave up the strip in favor of greener pastures. He was replaced on April 10 1932 by someone who signed himself just "Tom." Tom did a decent job of maintaining the art style, but his gags were even more torturously bad. There was little mourning when he left the feature after just three months, his last episode appearing on July 17.

On the 24th a substitute signing himself G. Hayes (probably Geoff) came aboard for a single episode, then the next week someone signing themselves G.D. took a whack at the strip. On August 7 a new permanent creator appeared, a fellow who signed himself "Dan-'l". Dan'l was a pretty poor cartoonist, and his gags were worse than his art.

Dan'l kept plugging away, though, and his tenure ended after 15 months only because the half-page College Humor feature seems to have been cancelled. It ended on November 12 1933.

Thanks to Cole Johnson, who supplied most of the samples above (top one is Eggleston's last strip, then  two by "Tom," and one by "Dan-'l", followed by a sample of the full College Humor feature, this one with a "Tom" strip).