Obscurity of the Day: Three Squares 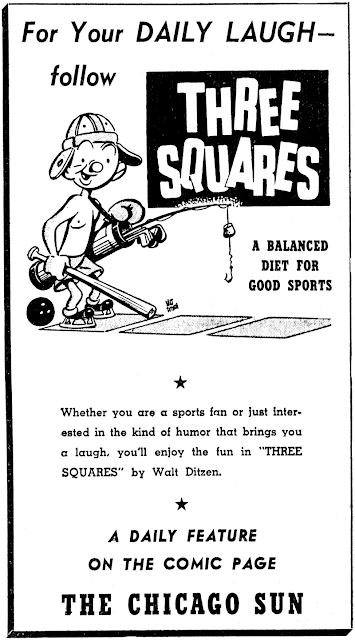 I'm a big fan of cartoonist Walt Ditzen. His sinuous smooth penwork and instantly recognizable bottle-shaped characters graced the strip Fan Fare for over two and a half decades. The strip is about sports, which isn't really my thing, but my gosh that art just makes my eyeballs so very happy.

Ditzen came by his interest in sports honestly; 6' 4" and powerfully built, he barnstormed with a travelling semi-pro basketball team for awhile until an injury sidelined him. He settled in Chicago and became an artist for the National Safety Council during the war years. After the war he took some strip ideas to the Chicago Sun; they must have been impressed by him because he was offered the position of comics editor. One of his first jobs was to try to market his sports humor strip. Having seen firsthand what is important to editors, he came up with a small 3-column format which could be run horizontally or vertically. Rather than play upon the sports aspect of the new strip, Ditzen appealed to editors even with the title, Three Squares. It had nothing to do with the sports theme but accentuated his marketing come-on that the strip could fit just about anywhere.

Three Squares didn't sell well, but in the newspaper world there were plenty of editors who weren't fans of Marshall Fields' Chicago Sun, so that could have been the problem. There were just enough clients to launch the strip on June 3 1946*. Most client papers placed the strip on their sports pages, where the subject matter was sure to find an appreciative audience. Ditzen figured out pretty quickly that readers particularly liked his strip when the gags were about sports they themselves engaged in --  bowling, golf, fishing and such -- and Ditzen served the audience loyally.

Unhappy with his small client list, Ditzen tried to figure out another angle. He came up with the idea of offering the strip in two formats -- Three Squares would continue as is, but he'd add a fourth panel to each day's strip and market that as Fan Fare (thankfully not Four Squares!). Papers could then run either version, responding to daily space constraints. The Three Squares name would not officially continue, but client papers being as lazy as they are, the name lived on with many of those early clients.

He did not come up with this idea on his own. Doing the practically unthinkable, he'd been shopping Three Squares around to other syndicates. He found an interested suitor at the John F. Dille Company, and he probably cooked up this idea with them. Although Fan Fare did in fact debut under the imprint of the Chicago Sun on September 29 1947**, Ditzen already had one foot out the door. He announced publicly in Editor & Publisher that the strip would be moving in December. What is unrecorded is how long it took Marshall Field to plant a boot on his backside -- for all I know he remained the comics editor for Field for years afterward (anyone know?).

The 'drop panel' employed with Fan Fare didn't last long. In fact, it may have already been dumped by the time Dille's syndicate slug began appearing on the strip December 22 1947.