Lawrence Lariar was born Lawrence Rosenblum on December 25, 1908, in Brooklyn, New York. His birth date was recorded on his World War II draft, Connecticut death certificate (transcribed at Ancestry.com) and at the Social Security Death Index. However, three documents have 24 as the birth day: his New York City birth certificate (Ancestry.com) and 1929 and 1936 passenger lists. Lariar’s parents were Marcy Rosenblum, an English emigrant, and Ella Poll, a New Yorker, who married on February 28, 1906 in Manhattan. Lariar’s birth surname was noted in Contemporary Authors (1975) and in The Armchair Detective, Winter or Spring 1982.

Lariar has not yet been found in the 1910 U.S. Federal Census. The 1915 New York State census enumerator misheard Lariar’s first name and wrote Florence. Lariar, his parents and two siblings resided in Brooklyn at 227 East 26th Street. Lariar’s father was a builder. The address was the same in the 1920 census.

Lariar’s father passed away July 19, 1924, according to his death certificate at Ancestry.com.


Lariar’s training began in the New York School of Fine and Applied Art. For the first six months he was on commercial illustration, then switched to cartooning. After graduation he started out with two buddies, Jack Arthur, now a school teacher in the New York system, and Adolph Schus, now a designer in fabric house.

The trio set up a cartoon agency in a flat in the 80’s in New York, sold vignettes to College Life, for which the editor wrote two-line captions. They also got in America's Humor magazine, primarily because it couldn’t pay as much as Life or Judge, says Lariar. Arthur, the oldest of the three (he was 21) would contact various outlets and say he represented a dozen different artists, which Lariar, Arthur and Schus tried to prove. One of their “artists” was named Baron de Shebago, who drew a full page of zanies.

In 1927, Lariar went to Paris on a scholarship to the school of dynamic symmetry. [Contemporary Authors said he studied at the Academie Julien.] He was accompanied by Arthur. Later, the third musketeer, Schus, joined them. They went into the same routine in Paris, and did a big business with British magazines and Fleetway House, then one of the big magazine publishing houses of the world. Much of their work was for The Looker-On, which folded but paid off—fortunately for the sake of their fares back home. They did work, too, for Boulevardier, a Paris publication operated by Erskine Gwynn, an American.

The trio caromed back to New York in October, 1929 [Lariar’s return was on September 10 according to a passenger list at Ancestry.com], a few days after the boom had burst.

“To make a living, we did everything,” says Lariar. “We had a service for printers, drew cartoons for calendars, played messenger and did some of the first work for the slicks.”

Flushed with success, they then embarked on a venture that sank them. In Paris, Lariar had picked up a book reproducing the etchings of a Rembrandt exposition. The plates were excellent, and they had sold many of them to friends back home without any other effort than razoring them out of the book. Reproduction by a photographic process was expensive, and they moved in trade as slowly as coal buckets from a hardware merchant’s shelves in the summer time. …

Lariar has not yet been found in the 1930 census. Contemporary Authors said he commercial advertising artist from 1930 to 1933, then a freelance illustrator and political cartoonist in 1933. Editor & Publisher said “Lariar rented offices on 45th Street where he turned to strip cartooning, drew some of the first comic books in 1933, and for Stuart Shaftell’s Young America created ‘Inspector Keene of Scotland Yard.’”


Lariar was credited as “Lawrence La Riar” in 1934 issues of Collier’s Magazine.

In 1936 the couple traveled to Europe. They returned to New York on October 16, 1936. The passenger list said their home was in Lindenhurst, Long Island, New York. That same year saw the publication of the first volume of Who’s Who in American Art which included Lariar (spelled La Riar) whose home address was 150 Ocean Avenue in Brooklyn, and office at 56 West 45th Street. The entry said his cartoons appeared in Collier’s, Saturday Evening Post, Judge, Life, Country Gentleman, Young America, American Magazine, New York American, and Everybody’s (London).


In 1935, Brooklyn-born Lawrence Lariar married his agent, Susan Mayer [sic] of Brooklyn. They have two children. Lariar says his wife was one of the first cartoon agents in the magazine gag panel field, and was a gag creator on her own. He took the Walt Disney aptitude test in 1938. … 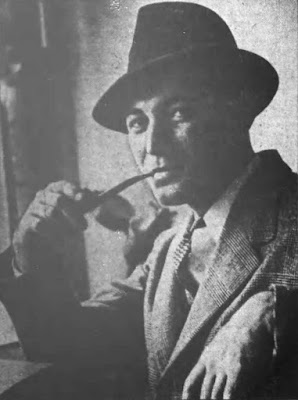 
Lawrence Lariar of Wynsum avenue, Merrick, whose humorous cartoons in Esquire, Colliers, Saturday Evening Post, American and many other publications are “tops” as laugh producers, has gone to Hollywood.

He will forsake his drawing board for the typewriter when he joins the staff of Walt Disney productions in the story department.

Although he is only 30, Lariar is near the top in his profession and has been for several years. When his name was added to “Who’s Who in America” in 1937, the ultimate listing medium for those who have arrived, he was the first comic artist to be listed in that book.

While he has been cartooning for seven years as a free lance, poking fun at politics and administrations with his funny characters, he is no stranger to writing, and he feels that in joining Walt Disney, he is heading one step nearer the top of the ladder.

For Lariar believes that Disney has only started his career in motion pictures. Lariar has written fiction and he hopes to write more for Disney productions, but with the difference, that instead of seeing his work only in print, he will see his characters in action on the screen. …

Lariar returned to New York and wrote Cartooning for Everybody which was published by Crown Publishers in 1941. In Drawn to Life: 20 Golden Years of Disney Master Classes, Volume 2 (2009), Walt Stanchfield wrote


In his book, Cartooning for Everybody, Lawrence Lariar astutely counseled, “Sketching is sketching. It involves a model, usually, whether the model is a buxom nude or an old tomato can. It is copying, after a fashion. The cartoonist, when he sketches, is going through a process of study. He concentrates upon the model, plumbs its movement, bulk, the ‘guts’ of the thing he’s after. He puts into his drawing (though it may be as big as your thumbnail) all his experience. He simplifies. He plays with his line. He experiments. He isn’t concerned with anatomy, chiaroscuro, or the symmetry of ‘flowing line.’ There’s nothing highbrow about his approach to the sketch pad. He is drawing because he likes to draw!”


Contemporary Authors said Lariar was cartoon editor at Liberty Magazine from 1941 to 1948.

Lariar wrote many books. He used the pseudonyms Adam Knight, Michael Lawrence and Michael Stark on his fiction works. The Man With the Lumpy Nose crime novel was published in 1944 and featured cartoonist-detective Homer and his fellow artists of the Comic Arts Club. The book won the Red Badge Mystery Award of a thousand dollars.

Lariar’s Best Cartoons of the Year annuals began in 1942. 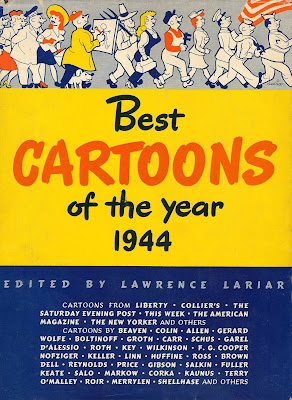 In 1945 Liberty published the comic strip The Thropp Family which was written by Lariar and drawn by Lou Fine and Don Komisarow.

American Newspaper Comics (2012) said Lariar was the writer on Bantam Prince. The series began as Bodyguard on May 2, 1948. The title changed to Ben Friday on July 11, 1949 then to Bantam Prince in October 1950. The first artist was John Spranger who was followed by Carl Pfeufer. See strips in color at Fabulous Fifties.

Two books by Lariar were published in 1950: The Easy Way to Cartooning from Crown and Careers in Cartooning from Dodd Mead. David Brown wrote the foreword to Careers and said in part


As Editor of Liberty, I’ve had an opportunity to observe Lawrence Lariar’s versatility in the field of comics. He has been Cartoon Editor of Liberty for seven years, during which his skilled judgment in selecting our cartoons helped maintain a high level of humor in the pages of our magazine. I know of nobody in the cartooning business who is better equipped to show the young talent of this country the inner workings of the various branches of the craft, for Lariar has been through the mill of experience in every phase of professional cartoonery.

Lariar was the emcee of the CBS television show, Draw Me Another in 1947, and created the Happy Headlines show. According to Billboard, February 3, 1951, he was a panelist on What’s the Gag? 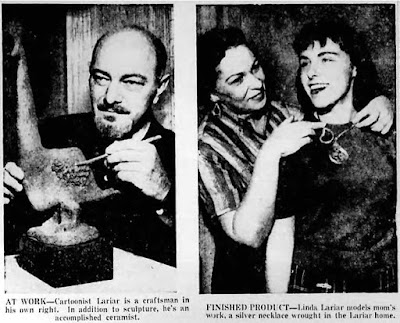 Cartoonist Bill Griffith wrote about his mother’s affair with Lariar in Invisible Ink: My Mother’s Secret Love Affair with a Famous Cartoonist (2015) which was reviewed here.

Lariar passed away on October 12, 1981, in Waterbury, Connecticut. The death certificate said his address was 399 Heritage Village, Southbury, Connecticut. It also mentioned his father’s surname, Rocenblum. A brief obituary appeared in The New York Times, October 15. Lariar’s wife passed away January 15, 1995 according to the Social Security Death Index.