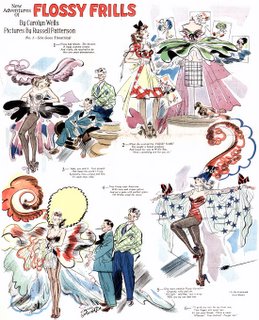 One of the mostly unexplored, yet treasure-laden, aspects of newspaper comics are the Sunday magazine covers. Until the mid-1940s, when Sunday newspaper magazines all morphed into low-rent versions of Life and Look, most Sunday magazines were full-size newspaper sections with fabulous full page artist-drawn covers.

Many of these covers were strictly illustrations, but it was by no means a rare occurrence for them cross over into cartoons and even comic strips. The comic strips that graced the covers of Sunday magazines were seldom of the ruled panel and word balloon variety, though. Because the page was designed as a whole, with no need for the artist to worry about reproduction in various different formats, the pages were typically artfully done as a series of floating vignettes with numbered captions to guide the reader.

Sunday magazine cover comic strips almost universally share two properties - pretty girls and poetry. Many of the greatest glamor girl cartoonists plied their specialty on these covers, and one of the most often seen is our artist today, Russell Patterson. He is paired here with another Sunday magazine cover regular, Carolyn Wells. She supplied verses for Sunday magazine covers as early as the 1900s, and her byline was a Sunday magazine fixture for the better part of 40 years. She was a famous 'pop' poet in the days when there was such a thing.

Today's sample is the first of the series titled New Adventures of Flossy Frills, and it ran in the Hearst-produced American Weekly on January 26 1941. The series ran on the magazine covers for ten weeeks, ending on March 30 1941. Seldom did these series run for more than about 12 weeks at a time.

This is actually the second of a total of four Flossy Frills series that ran on the covers of the American Weekly. The first was titled Flossy Frills and it ran 11/12/39 - 1/21/40. The third series was Flossy Frills Helps Out which ran 3/16 - 7/19/42, and the last was Flossy Frills Does Her Bit. This last series substitutes Percy Shaw's verse for Wells' (Wells died in 1942), and it ran starting 9/12/43. I don't have the end date for this series.

The 1943 Flossy Frills series is the very last Sunday magazine comic strip series that I've been able to document. Anyone know of a later one?

Comments:
A bit late to comment, but I just read the Bud Blake interview in Hogan's Alley and I would love to see more of his Pictorial Review covers from the sixties. If, as he says, he did 30 a year that would make a great collection. In fact, I have collected quite a few of his panel strips from before Tiger and they would make a great Fantagraphics book as well.