Obscurity of the Day: The Passing Show 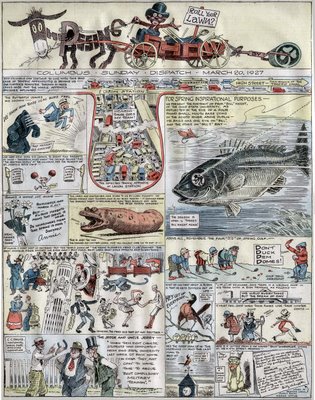 William (Billy) Ireland had no interest in hitting the big-time of New York, even when they came calling with a blank check. As can be seen here in our sample, it was definitely New York's loss.

Ireland was the editorial cartoonist on the Columbus Dispatch for essentially his entire career, 1898-1935. While his editorial cartoons were first-rate, it's safe to say that his crowning achievement was the weekly The Passing Show page. While I think I can reasonably label it an obscurity, it is certain that the people of Columbus would dispute that. The feature was a much-beloved fixture of the Sunday Dispatch, both for its graphic inventiveness (the mastheads alone are worth the price of admission) and all the local color. Ireland seemingly knew everyone and everything in Columbus, and he lovingly lampooned it all each Sunday. The pages were always jam-packed, like the one above, filled to the brim with local happenings, oddball news, and personal anecdotes.

The Sunday full page version of The Passing Show began on February 9, 1908 and was administered by Ireland until his death. His last published page was 6/2/1935. The creator took a vacation every summer, during which substitutes would be called upon to keep the Show rolling, as it were (more on subs tomorrow).

Billy Ireland was noted for his kindnesses to aspiring cartoonists. He was Dudley Fisher's mentor in the 1910s, and later gave Milton Caniff his first pro cartooning job at the Dispatch. Noel Sickles also acknowledges a great debt to Ireland for giving him early encouragement.

After Ireland's death The Passing Show was continued by Harry Keys, who renamed it We Folks in 1938. Others who took a crack at the Ireland legacy page were Bob Vittur and Myron Dixon. As We Folks, the feature ran until at least 1944 (which is as far as I've indexed the Dispatch). Anyone know when it ended?

If the sample above has whet your appetite for more Billy Ireland, seek out the huge reprint book "Billy Ireland" published by Ohio State University Libraries in 1980, ISBN 0-88215-051-0. Not only does it reprint a huge helping of Ireland's art (and at a decent size, yet!), but there's also several fine essays on Ireland and his legacy.

By the way, I have a query regarding the World Encyclopedia of Cartoons entry on Ireland. Therein it is stated by Rick Marschall that Ireland spent a few years working in Chicago prior to getting his job at the Columbus Dispatch, specifically at the Chicago Daily News in 1897 and at the News-Advertiser in 1898. The Ohio State University book claims he only worked at the Dispatch and, for a short time, the Chillicothe News - never outside of Ohio. On checking into this myself, I can find no record of a newspaper in Chicago titled the News-Advertiser. Rick, if you're out there, can you help set the record straight?

Comments:
I'm from Columbus and naturally he seems like a Giant to me. I directly attribute my interest in the the Art of Comics to having grown up surrounded by subtle Ireland, Caniff and Sickles influences. Billy is still quietly revered here today.

I have a original layout of Harry Keys, it is in a frame and has been perserved well. It measures 27" x 21". It is title We Folks and it is all about the War bonds,rations,and even buckeye lake is mentioned in it. It is all original and is signed. I got it at a estate sale in Columbus. I am wamting to list it on Ebay but have no idea what it could be worth, does anyone have a clue? Have lots of pictures of it. Thanks so much debby