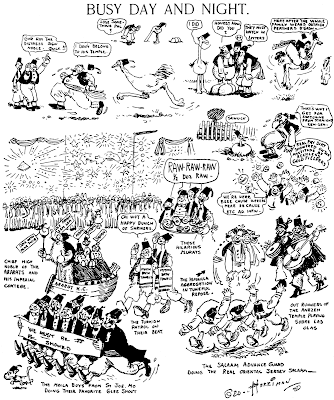 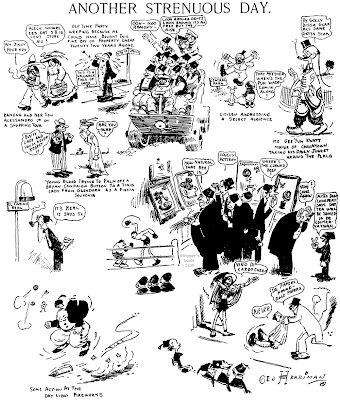 Here are Herriman's offerings for May 8 and 9 1907. He's still covering the big Shriner convention. What I find interesting in this whole series of cartoons is that George is having a lot of fun with dialect and wordplay, later a hallmark of his Krazy Kat.

The weird names all over the second cartoon (Zem Zem, Anezeh, Murats, etc.) are various local chapters of the Shriners. The ostrich business, on the other hand, I can't interpret.

Comments:
Hello, Allan----Back in those days, a big tourist attraction in southern Calofornia were it's ostrich farms, and the visiting shriners no doubt paid a visit. Some farms gave guided tours, let you see the incubators, served lunch, and gave ostrich-powered wagon rides. The need for so many ostriches was, of course, the large demand for their feathers in ladies' hats.-----Cole "Ostrich Lore" Johnson. 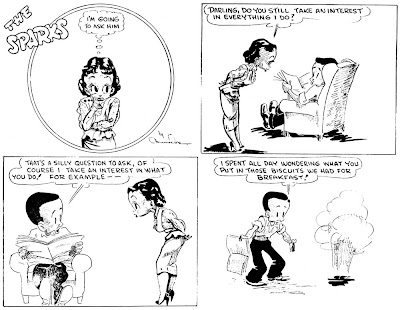 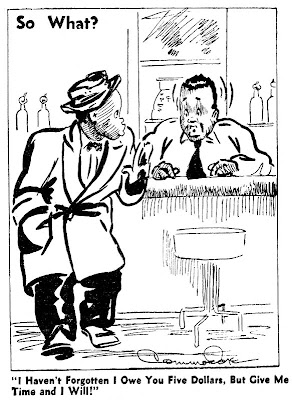 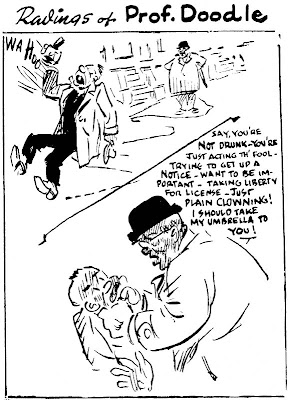 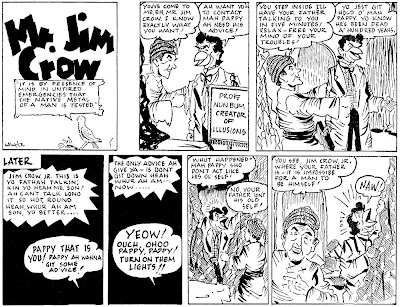 After walking hundreds of miles over the past month and knocking on thousands of doors I arrived home after the polls closed last night and fell asleep before any results were in. By some small miracle I awoke at midnight to hear Barack Obama's inspiring victory speech. Judy and I wept with joy to know that our country has chosen the right path to the future, one in which the rest of the world is not seen as a long list of enemies to be battled, but as a roll call of friends and potential friends.

Frankly I had just about written this country off as having fallen completely under the spell of neo-conservative right wing fundamentalists, but as it turns out our mighty beacon of freedom, hope and liberty still burns. Although I had dared to hope that the margin of victory would be much wider than it was, I'm confident that the next four years will be a turning point in showing our people that this past eight years of fear-mongering and xenophobia were just a brief nightmare and that we have awakened to a new dawn, a day when the United States of America regains its rightful position as a country to be admired and emulated by the rest of the world.

Comments:
Totally agree,good post!I was awake until too late wishing this happy results too.I was thinked this success was difficult almost impossible,but the common sense prevailed.Adding now USA has a new opened (like a freeway) future path along with the rest of the Americas:-)

Also I linked an extra caricature of OBAMA making history by Daryl Cagle and more to see:

Thanks for all your hard work! (and for making a great blog too)

I am new to your website and am reading all your blogs from when you first started. I do not agree with your opolitical viewpoints, but does politics really need to creep into every aspect of our life-even a website devoted to comic strips?

This is my 1,000th post on the Stripper's Guide blog. In it I have one very simple message for you:

See you after the election -- I have many more doors to knock on before I sleep again.

Comments:
Hi Allan,I can't.I'm from another country,but I still have my fingers crossed wishing the best results:-)

Unbelievable! Everytime I visit your site I'm awed by the wonderful things to be found here! I hope you don't mind if I again swipe a few samples for my own blog. I promise to direct as many people as I can back here. 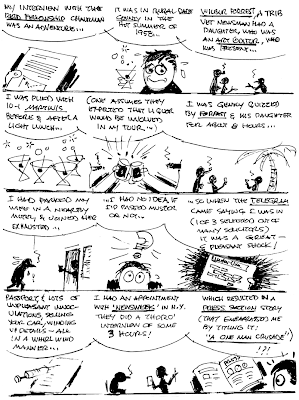 Comments:
Absolutely marvelous blog. I am in the process of researching the Lincoln Syndicate, and a few interesting strips from the Eisner/Iger studio. We are planning some major books based on some very rare series.

Keep up the great work