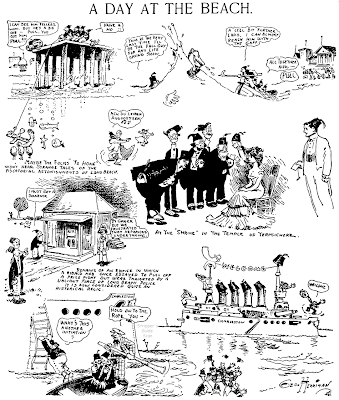 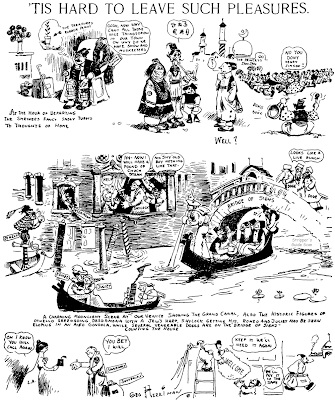 The Shriner's convention is winding down, but Herriman is still in there plugging away with his daily cartoons. These were published on May 10 and 11 1907.

Yet More Opper Overflow from the New Happy Hooligan Book 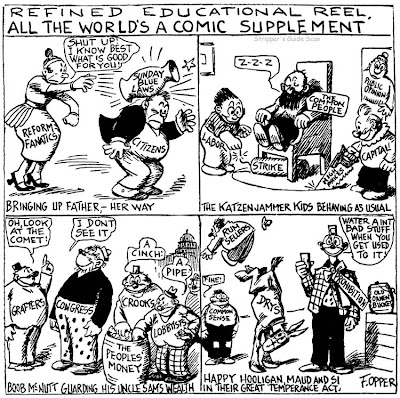 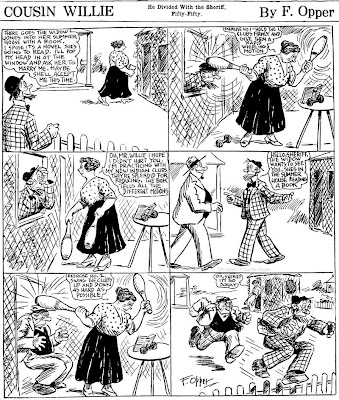 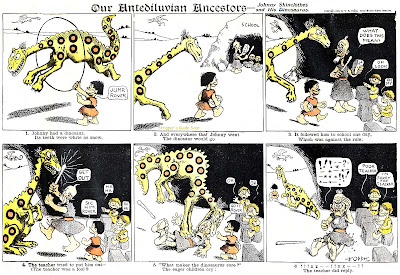 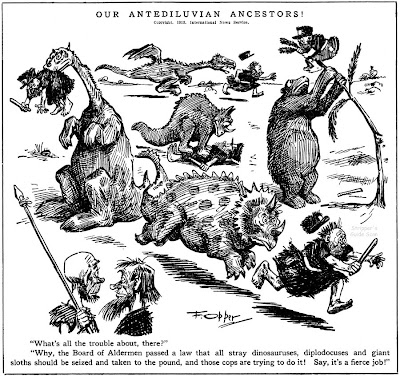 I supplied a great many Opper cartoons that didn't find their way into the book, so here's a potpourri of bonus Opper items for you.

Today we have a wonderful editorial cartoon from 1919 wherein Opper gives us his interpretations of a few of Hearst's other star comic strips. Then we have a Cousin Willie daily strip from 1916. Willie was a member of Opper's cast of country folk who popped up in many of his strips. Finally we have a pair from my personal favorite Opper series, Our Antediluvuan Ancestors. Opper really seemed to get a kick out of drawing weird dinosaurs and used them to good effect in commenting on modern problems. The example from the short-lived Sunday version is from 1904, the daily-style one is from 1913.

Comments:
Hello, Allan---I get the impression that Opper didn't read other strips much. That's an awfully tiny Captain in the Katzie panel, and since when did Boob McNutt have big wet-dog whiskers?---Cole Johnson.

Maybe Opper was trying to show those amateurs Goldberg and Knerr how their characters should be drawn to be REALLY funny. 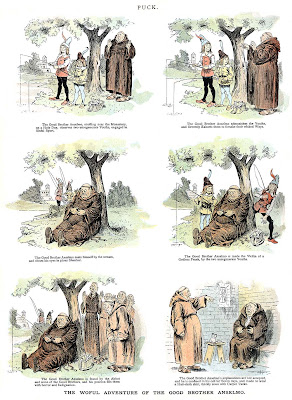 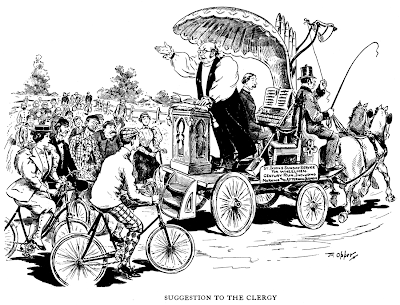 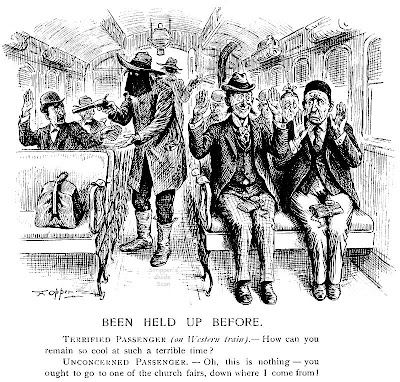 I supplied a great many Opper cartoons that didn't find their way into the book, so here's a potpourri of bonus Opper items for you. Today we have three from Opper's Puck days, when he used a very refined style completely different than the one he used for newspaper strips.

These three Puck cartoons are all satires on religious themes, a favorite subject for Opper in his days with that magazine. Opper curtailed such cartoons when working for Hearst. 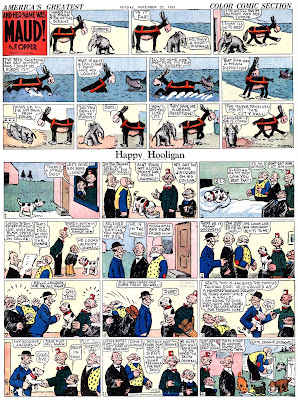 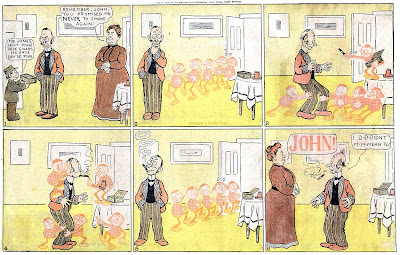 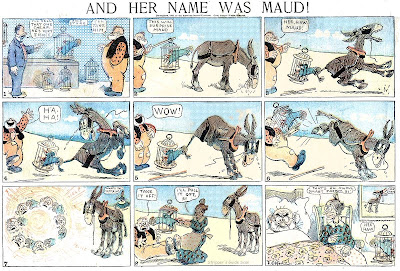 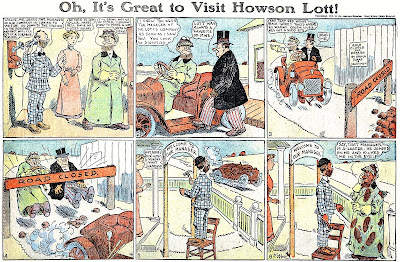 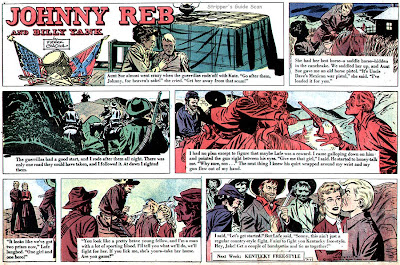 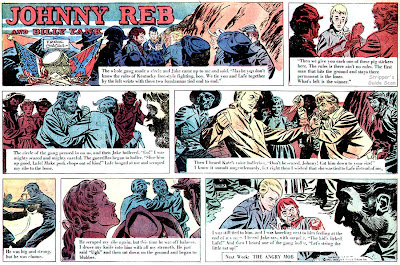 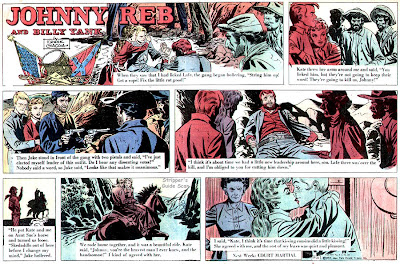 Obscurity of the Day: Builders of Wisconsin 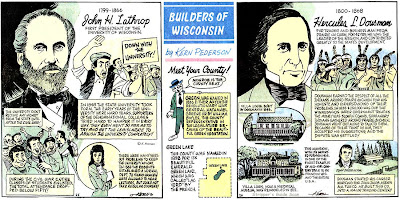 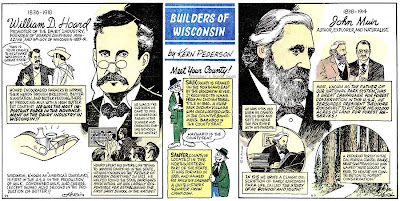 There's a whole laundry list of state history cartoon features, and Builders of Wisconsin was pretty typical of the genre except that unlike most it ran in color in the Sunday comics section rather than in black and white. The feature was by Kern Pederson, who is at least slightly better known as the creator of Little Farmer, a long-running weekly strip of the Al Smith Service.

The Sunday feature appeared in the Milwaukee Journal from October 22 1972 to sometime between May and October 1973. If it appeared anywhere else I'm unaware of it. A close look at the examples above reveal that the feature may have run as more of a daily style-panel at some earlier point -- notice that there are two numbered panels per Sunday episode. I've not found the feature running in that configuration, though.

One additional note -- don't blame Pederson for using such a muted and repetitive color palette on his feature. The Milwaukee Journal's whole Sunday comics section looked like this in the 1970s. Although they were definitely employing a 4-color press all the colors were washed out. I don't know if they were using cheap inks or what, but the whole section looked awful. 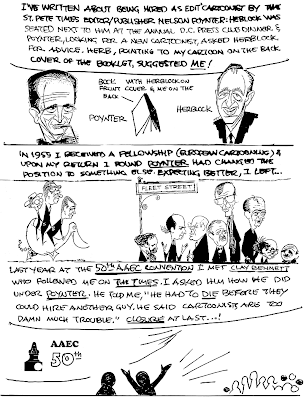 Comments:
Although I'd heard the story before, it's pretty impressive that Herblock suggested Jim for the position. Herblock was the first political cartoonist I knew by name.

As always, thanks to Jim for creating his "Sunday Comics" and to Alan for posting them!